The Flag is a piece of inventory stationed inside Blood Gulch outposts 1-A and 1-B. It serves as a goal for both the Red and Blue Teams, as they try to capture it from the opposing teams' base. It also serves as a religious relic to the Battle Creek Grunts. 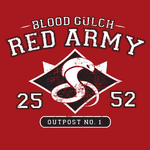 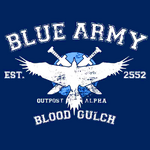 Retrieved from "https://rvb.fandom.com/wiki/Flag?oldid=146401"
Community content is available under CC-BY-SA unless otherwise noted.