Red vs. Blue Wiki
Register
Don't have an account?
Sign In
Advertisement
in: Teams, Federal Army of Chorus, Former Antagonist

Disbanded (Merged with the New Republic)

"These "rebels" aren't looking to free this planet, their aim is to dominate it! They were given ample opportunities to move to a former old society, somewhere else on Chorus; it is a large planet, I can assure you. But nooooo. They are determined to uh, "take back what is theirs!" I'll admit, times were hard, but as a planet cut off from the rest of the galaxy we did our best to govern the people."
—Doyle in The Federal Army of Chorus

The Federal Army of Chorus, also known as simply the "Federal Army", is a faction in Red vs. Blue consisting of Federal soldiers from the planet Chorus. They formerly fought against the New Republic in order to bring back order to Chorus and end the terrorism created by the rebels. According to the New Republic, however, the Feds use tyranny to control the planet's society and fight against them for control over the planet.

According to Felix, an affiliate of the New Republic, after The Great War between the humans and the aliens came to a close, the outer colony of Chorus was forgotten by the UNSC and left to fend for themselves. After a while, the citizens of the planet attempted to govern themselves, but soon the Federal Army of Chorus was formed, which attempted to take over the entire planet and put everyone under their supervision. Due to their actions, they caused a faction known as the New Republic to form, as they wanted their freedom. As a result, this led to a Civil War between the two groups on Chorus.

General Donald Doyle tells a far different story to Washington, Sarge, and Donut. He claims that the Federal Army was firm but fair in its leadership, and gave the dissatisfied New Republic several opportunities to move away peacefully to another region of the planet, but they refused to listen and quickly began resorting to terrorist tactics. Doyle also claims that the New Republic's ultimate goal is to obtain complete control over Chorus.

Although having an advantage over the rebels, the Federal Army began to worry when the Reds and Blues are discovered on Chorus. As many thought the group were the greatest military soldiers in the galaxy and could determine the outcome of the war, the Federal Army sent a large military force to capture them. Despite heavy losses and four members escaping, they succeeded in capturing most of the Blood Gulch Crew, four of which join them when the Federal Army explains they aren't an evil tyranny and need their help.

After the Reds and Blues reunite, they decide to get the two forces to form a truce upon learning the similarities between them. Before they could do so, however, the crew discover that both the Federal Army and the New Republic were being manipulated by a band of space pirates throughout the war, led by Locus, Felix, and UNSC Oversight Sub-committee Chairman Malcolm Hargrove. Their goal was to eliminate the Chorusans completely and sell the planet's resources. With the help of the Reds and Blues, the two armies learned of this truth, joined forces and defeated Charon Industries, with General Doyle sacrificing himself during the lengthy battle.

Following Charon's defeat, ties strengthened between the Feds and Rebels, now putting aside their differences, ending their war, and rebuilding their planet for the better. 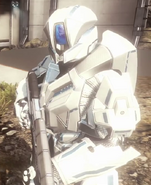