Familiar Feelings is the sixth episode of Red vs. Blue: Season 9 and the 179th episode overall.

At Blue Base, Church tries to get information from Caboose about the special forces soldier. During their conversation Caboose tells Church to call him "Roger", because command called him by that name. However, because of Caboose's stupidity, Church gives up and leaves. Tucker walks up to Caboose, calling him "Roger", and asks what's wrong with Church.

Meanwhile, at Red Base, Sarge and Simmons are seen working on a robot. Donut comes over and asks if Sarge can speak with him in private, leaving Simmons alone and a little embarrassed.

Back at Blue Base, Church tries to get the tank online, but fails at every attempt. Tucker asks why he is yelling at it, with Church saying that he needs to get the tank online before Tex comes. Tucker, thinking he is trying to impress his girlfriend, says he won't be able to pick up chicks in a tank anyway. Caboose says he also had a girlfriend once named "Emailia". Tucker corrects him by saying that was his e-mail. As Church starts to get angry, Tucker tells Church to listen to him if he wants to impress Tex and to call him "Professor Fuck ".

Back at Red Base, Donut and Sarge finish talking. Simmons walks up to Sarge asking how the their talk went, Sarge saying they talked about feelings. Simmons, trying to take an opportunity to bond with Sarge, asks him if he could also talk about feelings with him, but Sarge quickly stops him and tells him to get back to work.

Church and Caboose are standing atop Blue base.

Church: Okay, Caboose, think back. When you called Command about the special forces person, what did they say to you?

Caboose: They said, "This is Command. We read you Blue base."

Caboose: "Roger. Over and out."

Church: Before that. Somewhere between those two. "Goodbye" and "Hello" are not the important parts of the conversation.

Caboose: No I know, and my name isn't even Roger...although that is a very cool nickname. I wonder if it fits? Roger shut up. Roger don't put that in your mouth. Roger put that down. Roger will you please be my best friend. Signed, Church. P.S. Your new name is the best. I like it. Signed, Church...again.

Caboose: (lively again) Okay, they said that since one of our troops was hurt, and since we're outnumbered, they would send us a special agent to help us recover.

Church: And they said that agent would be here....

Caboose: When I was on the call with them.

Church: I mean the special agent.

Caboose: No, no see the operator said that.

Caboose: When I called Command. How else would they tell me?

Church: And they said they were sending a special agent.

Church: To our base.

Church: When did they say the special agent was coming?

Caboose: Oh, right before they gave me my new nickname.

Caboose: No, see it's Roger now, remember? See I know it can be confusing sometimes, Church, you have to keep up.

Tucker walks up next to Caboose.

Caboose: Oh I don't know, he's having trouble understanding something. You know how he is with that.

Cut to Red Base, where Sarge and Simmons are working on a robot. They have just completed the head and legs.

Donut walks towards them.

Sarge: Thanks. I didn't even know I was good with machines! You know what they say: Necessity is the mother of-

Donut: Hey Sarge, can I ask you about something?

Sarge: Sure, go ahead.

Donut: Be right back Simmons.

Simmons: (quietly) Sure you will. That's just what my dad said.

Donut and Sarge walk up a sunny hill.

Donut: Sarge, you ever have...you know, um...feelings and stuff?

Sarge: Feelings? Sure, all the time! Who doesn't?

Donut: I just wanna talk to someone about some thoughts I've been having.

Sarge: Thoughts? About life and stuff?

Donut: Yeah, and you always seem so interested in the men and how we're doing.

Cut to back to Blue base. Church walks up to the tank and starts talking to it.

Tucker: What the fuck are you doing?

Church: I'm trying to turn on the damn tank.

Tucker: By yelling at it? Why don't you just use a key?

Church: You have keys for the tank?

Tucker: Nah, they didn't send them.

Church: (sarcasticly) Thanks, you're a big help.

Tucker: Me? I'm not the one yelling at the tank. Hey the TV is on fritz too. You wanna come inside and yell at it? Maybe you could insult his mother or something.

Church: I need to get the tank running before Tex shows up.

Tucker: Right, the secret agent who also just happens to be your girlfriend.

Tucker: And you think if you have a tank you're going to impress her.

Church: No, I need it to defend us in case things get a little, out of hand with her. Like I said it's-

Caboose: I had a girlfriend once.

Caboose: I met her on the Internet.

Tucker: Oh man, your girlfriend was a dude.

Caboose: Her name was Emailia. She would send me letters all the time.

Caboose: Letters from my family, letters about stuff I ordered online, even about investment opportunities from other countries.

Tucker: What? Dude, I don't think your girlfriend's name was Emailia, I think it was Email. I'm pretty sure you fell in love with your email.

Caboose: She was always there for me, until I forgot our special word.

Caboose: (sadly) She never forgave me.

Tucker: Well I guess you should've made out with her sister, Voicemailia.

Caboose: Oh she talked too much, and she always blinked at me.

Tucker: Dude give it up, stop working on the tank. You can't pick up chicks in a tank anyway.

Tucker: Actually, now that I say it out loud, I guess you could pick up chicks in a tank. Well I could. You can't, so stop messing with it.

Church: I have to do something.

Tucker: You wanna impress your girl? Just listen to me. School's in session. About to start the master class. Professor Fuck, that's me.

Music stops playing. Cut back to Red base, where Simmons overlooks Sarge and Donut still talking on the hill. Grif walks towards him.

Grif: Are Sarge and Donut still talking up there?

Simmons: Yeah, it's been a few hours. Maybe I should see if they want anything to eat.

Cut to Donut and Sarge.

Donut: And don't even get me started on the design of the new armor! The lines are all wrong...and the color pallet? I mean, what is this...Autumn!? Am I right? But let's save that for another day.

Donut: Well, thanks for the talk Sarge.

Simmons: So, uh, what were you guys talking about?

Simmons: That was a long talk.

Sarge: Yes it was.

Simmons: Well, if there is anything the troops can confide in, it's you Sarge.

Sarge: Simmons, I'm going to be honest with you...I think he might have used all that up.

Simmons: But, you still have time for me right? I have some thoughts I've been wanting to get off my chest.

Sarge: Why don't we just get back to work?

Simmons: Back to work after our heart felt discussion, right sir?

Sarge: You know what I'm thinking Simmons, let's just put a pin in that discussion.

Sarge: Or a nail. Nails last longer. Or one of them railroad spikes! Tell you what, let's abandon the pin metaphor altogether. Let's just take your idea, put it in a box, wrap that box in chains, then cover the whole thing with cement, and throw it in the ocean. 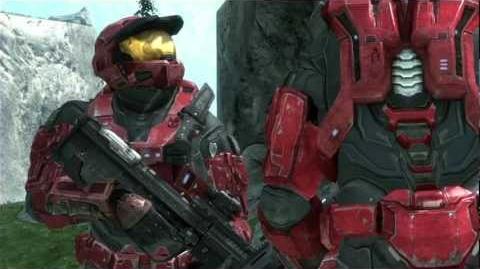 Retrieved from "https://rvb.fandom.com/wiki/Familiar_Feelings?oldid=139750"
Community content is available under CC-BY-SA unless otherwise noted.