Exploring Our Differences is the ninth episode of the fourth season and the sixty-sixth of The Blood Gulch Chronicles.

On the beaches of Zanzibar, Church tries to give some last-minute advice and parting words to Tucker and the rest of the quest team before they begin their trip. Tex apparently has a strong attraction to Tucker's energy sword as well as the Alien's rather muscular naked body, or specifically one part of it. Church attempts to say some encouraging words to Tucker, but this fails as Tucker frustrates Church's attempts. As the team leaves, Church remarks to Tex that he is surprised that she did not go with the rest of the group, as quests usually have a reward of riches or power at the end of them. As he finishes his sentence, he assumes correctly that Tex has already left.

Back at Blood Gulch, Simmons decides to take Grif back to Blue Base as a hostage. After some prodding from Grif about not being "properly treated" as a hostage — in other words, Simmons wasn't being mean to him — Simmons starts hitting him. Simmons pushes Grif into what he thought was a hole, but it turns out to be part of a gravity lift that keeps bringing Grif back up behind Simmons. The episode ends with Simmons getting frustrated each time he pushes Grif into the hole only to have him almost immediately return.

Fade in to a distant shot of the Blues, yet their voices are just as loud as they normally are

Church: Well, good luck guys. Don't forget to change your underwear at least once a day. Tucker, that goes double for you.

Church: No, it goes double for you because now you're in charge of changing Caboose's as well.

Tucker: I hate you.

Andy: He doesn't wear any pants.

Tucker: Yeah, we noticed. If we meet anybody on this adventure, that might have to change.

Andy: Why, we're used to being naked. Free-ballin', come on! Commando.

Tucker: Let me just put it this way; I felt less threatened when Tex was staring at just the sword.

Tucker: Yeah one particular part of his muscle structure.

Caboose: You told me it was another arm...

Caboose: (Quietly) I don't want to do that any more...

Church: Tucker come here, I want to talk to you for a second. Listen, just drop off this weapon, and get back to Blue Base as fast as you can.

Tucker: What if I have to kill stuff, dude? I'm a lover, not a fighter.

Church: Hey now, Tucker, I'm the same way. That's why we get along so well. We're both just a couple of lovers.

Church: Yeah it did. Uhm... I feel obligated to say something encouraging as your boss.

Tucker: Our Captain died. You're just the guy pretending to be my boss.

Church: Well, you know in our given situation technically you could be seen as one of my employees.

Tucker: Except that I'm not.

Church: Echch, whatever! Listen, I just, as, as someone in an employee/manager relationship-

Tucker: Why did you pull me aside again?

Church: You know I'm sure it was to say something inspiring, or... something, but now I just don't care.

Andy: Hey lady! Come on, hustle up! If you gotta use the bathroom, do it now 'cause I'm not pullin' over.

Church: You know I have to say I'm a little surprised that you're not goin' with them.

Tex: Why? Quests are dangerous.

Church: Yeah but they usually have some kind of big reward at the end, you know, like some, big treasure chest or, an entire room filled with gold and art. It's not really like you to pass up on something like that, Tex. ...Tex? ...You're gone, aren't you. ...Huhhh, I really shoulda seen that coming.

Sarge: Well, this is a tough one. Simmons appears to have captured Grif. Which means we're down a man. And now that man has taken Grif prisoner. So does that make us even? What's one plus a turd? Dammit, only Grif can screw up math!

Cut to Simmons walking Grif down the ramp into Blue Base

Grif: You know Simmons, you don't make a very good hostage-taker. My last prisoner experience was much cooler.

Grif: You haven't even yelled at me one time.

Simmons: You're doing everything right. I think yelling should be reserved for only the most critical of situations. (tersely) Like when someone drinks milk out of the carton!

Grif: Come on, Simmons, I'm a prisoner. You should be jabbing me in the back with your gun and saying “get moving scum!”

Simmons: (jabs him in the back with his gun) Get going!

They arrive in the middle of the base

Grif: Man, these guys really like blue lights. I mean, I know this is Blue Base and all but come on, you don't have to beat us over the head with it.

Simmons: Get in the hole.

Grif: You have a hole? Whoa, now that's cool. I take back everything I said, this is much creepier than my last time in the joint.

Grif: Dude, if you keep doin' that, this is gonna get old quick.

Grif: (materializing behind him) Um, I think I found a design flaw in your hole.

Simmons: What? Get back in there! (hits him)

Grif falls down the hole, then is propelled back up through another hole behind Simmons.

Grif: Woohoo! Look who's back.

Grif: Seriously dude, you have to try the hole. It's really fun.

Simmons: Ugh, what're you doing? Get back down in there. (hits him)

Grif: Wheee! Look I came out backwards this time!

Simmons: You're supposed to s- you're the prisoner, stay down there! 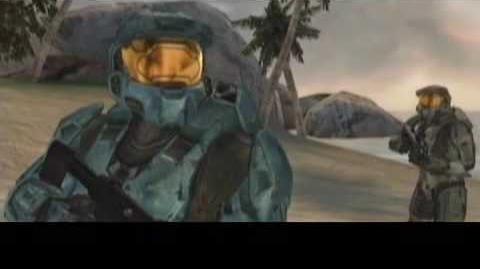 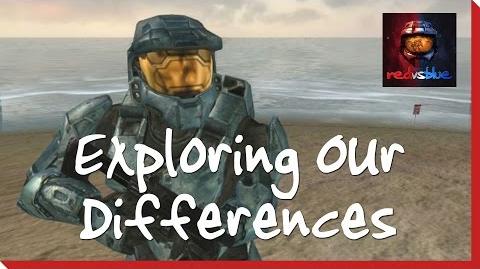 Exploring our Differences - Episode 66 - Red vs. Blue Season 4
Remastered
Add a photo to this gallery
Retrieved from "https://rvb.fandom.com/wiki/Exploring_Our_Differences?oldid=139912"
Community content is available under CC-BY-SA unless otherwise noted.