Everything Old is New Again is the first episode of the second season, and the twentieth of The Blood Gulch Chronicles. It is set three months after the events of Last One Out, Hit the Lights.

The episode starts off in the middle of the canyon with Medical Officer DuFresne hailing for Blue Command, stating that he has reached Blood Gulch Outpost Alpha. Vic answers and shrewdly tells Doc that he is from Blue Command. DuFresne is hesitant to believe, but reluctantly accepts anyway and informs Vic that he is going to rendezvous with the Blue Team.  Vic then looks up "Blood Gulch" in the database and finds DuFresne's mission orders. Vic reiterates his objective to him, telling him to meet up with Pvt. Tucker and asses their wounded. Vic also begins to read something he apparently is not supposed to, and stops before revealing anything important to DuFresne. DuFresne then proceeds to Blue Base.

At Blue Base, Tucker tells Church, shown in cobalt armor again, that Caboose has been habitually threatening him while speaking in a "scary" voice. Caboose denies this however, telling Tucker that he is taking his words "way out of context". DuFresne then interrupts the Blues' conversation and introduces himself, asking Church if he is Pvt. Tucker. Church corrects him and then introduces Blue Team to him. DuFresne explains that he had received their call for medical assistance from Command, but Caboose informs him that their request for a medic was three months ago. Church tells DuFrense that the patient had been buried in a grave, along with "himself". DuFresne is confused and expresses disbelief. Caboose then fills him in, roughly retelling the events on how Church had possessed a "mexican robot body" after being killed by a "runaway tank". He also adds that Church's new body was spray-painted cobalt in order to attain his original look.

With nobody actually hurt, DuFresne takes out his medical scanner, telling Tucker and Caboose that he would have to check their vital signs to make sure they're okay. After checking both their vitals, he asks Church where Red Base is. Church is surprised by this, asking DuFresne if he was sent here to be a part of their squad. DuFresne tells him otherwise, saying that after his job in treating Tex, he is to assist with whatever injuries that are sustained within the canyon itself. Church tells him his real job is to eliminate the Red Team, but DuFresne reveals himself to be a pacifist, in which he explains it as a "conscientious objector".

He also tells them that, due to low resources, he is "on loan" to both Red and Blue armies. Church then suggests he put his medical scanner away if he is to go to Red Base, saying that they might shoot it right out of his hand. DuFresne's medical scanner is then shot at by a sniper rifle round by Donut. The Blues and DuFresne then scatter after coming under fire from Red Team, who are shown assaulting the base.

Static and radio noises are heard. Camera fades in on a dim view of a planet.

Camera fades out to black, then in on a panning view to the right over Blood Gulch.

Male Voice: This is Medical Officer DuFresne. I have reached Blood Gulch Outpost Alpha, do you read?

Camera fades out to black, then in on a daylight view of the moon, slowly panning down.

DuFresne: Say again, Blue Command. I do not read.

Vic: (distorted) Check two. Is this thing on? Hello, hello.

Camera continues to pan down, revealing DuFresne in purple armor.

Vic: (audio distortion ends) Yo, I hear you. Calm down, dude, what's going on? Hello, yo, can you hear me, hello?

Vic: Sorry 'bout that, I was in the elevator, this thing doesn't work so well in there. What's going on, dude?

Cut to view of Vic at Command.

DuFresne: You're sure? The Blue Command base?

DuFresne: Roger that. Any other orders?

Vic: Anything else.. yeah okay, yeah, it says here whatever you do, don't- oh. Okay, never mind dude, I'm not supposed to read you that part, okay, just uh... you'll be okay, just, uh, be very careful. That's all.

Vic: Alright then. Well it's our goal here at Blue Base to provide excellent customer service, and I hope that I have done that today. Uh, if you have any further questions about this radio transmission, you can just, um, you know call back, say "Dude, I've got some questions, what's goin' on." Over and out.

Cut to Blue Base.

Tucker: Hey, Church, we have a problem.

Church: (in cobalt armor again) I am not your mother, so don't come tattling to me every time one of you does something that the other one doesn't like.

Tucker: I'm telling you, he's crazy. He keeps threatening me and talking in a scary voice.

Tucker: Oh, so you're saying you didn't threaten to cut off my head and give it to Church as a birthday present?

Caboose: You know, I think you're taking my words a little out of context.

Tucker: What? What context?

DuFresne runs up behind Church.

Church: Listen, guys, this competition thing has got to stop, okay? I thought we'd established by now-

Church: Hey, pal? One second, okay? I'm in the middle of something here. Ah, loo- I thought we'd established by now, I don't like either of you, okay? So competing for my attention is not gonna do ya any good.

Caboose: (to Tucker, in his "scary voice") Don't ever be alone.

DuFresne: My name's DuFresne... uh, are you Private Tucker?

Church: And our friend over there in regulation blue, that's Caboose. Or O'Malley, or whatever the hell he's callin' himself.

Caboose: Why did you introduce me second?

Tucker: Because he hates you.

Cut to DuFresne where two tombstones are seen in the background.

DuFresne: I received your call for a medic.

Tucker: Yeah, what'd you do? Crawl all the way here?

DuFresne: I came as quickly as I could. Where's the patient?

Church: Well, she's about fifty yards behind you and six feet straight down.

DuFresne turns around and sees the tombstones.

DuFresne: Oh. (turns back to the Blues) I'm sorry about your loss.

Caboose: We didn't like her very much. (whispers loudly) She was mean to other people.

DuFresne: Who's in the other grave?

Caboose: See, uh, he, got killed by this uh, crazy runaway tank.

Tucker: Or by the idiot driving it.

Caboose: Oh yeah, and then he became, uh, this really mean ghost, and uh, took over a Mexican robot's body, uh... oh! And then we had to uh, oyathatsright, spray paint him, ah, to make him blue, and now he is alive again, and he is a bionic man... Who... is blue...

Tucker: Right, and it took us six weeks to get his Spanish setting turned off.

Caption: Not entirely turned off, moron.

DuFresne: Wait, so, no one here is hurt?

Church: (click) No, we're fine. In fact, I feel better than ever. See now whenever these two idiots really start to bug me, I can always just turn my ears off. Couldn't do that before.

Caboose: You said they were shorting out.

Church: (click) I'm sorry, what was that Caboose? I can't hear you!

DuFresne: Well then let me just check you two out, and I'll be on my way.

Tucker: Whoooa... check us out? Is this gonna be one of those things where I have to turn my head and cough?

DuFresne: (holding up a medical scanner) No, I'm just gonna check your vitals.

Caboose: (to Tucker) I bet I have better vitals than you! (to Church) ...What's a vital?

Church: On your way? I don't think so, bud. Aren't you here to join our squad?

DuFresne: No, I'm just here to help out with Tex, and then assist in the canyon as needed.

Church: First of all, great job on the Tex thing. Mission accomplished. Secondly, the way that we need you to assist, is to help us kill all the Reds.

DuFresne: Well, even if my orders didn't prohibit me from doing that, I still wouldn't. I joined the army as a conscientious objector.

Caboose: You're a thing that babies suck on...?

Tucker: No, dude, that's a pedophile.

Church: Tucker, I think he means a pacifier.

Tucker: Oh yeah, right. Man, I was totally thinking about something else.

DuFresne: (finishing his scan) Well, everyone here checks out. I'll come back and check on you before I leave the canyon. Can you tell me which way to the Red Base?

Tucker: Why? You said you weren't gonna fight 'em.

DuFresne: I'm not. Resources are low so I'm on loan to both armies to help whichever side needs me at the time.

Church: Man, that is so freakin' lame.

DuFresne: I'm just gonna go to Red Base and see if they need any help.

Church: Well, if you're gonna go up to Red Base, I'd recommend putting away that little medical thingy of yours. They see you walking up carrying that thing, they're gonna shoot it right out of your hand.

Another shot goes between DuFresne and Church.

Cut to Sarge and Donut in the middle of the canyon. Donut is using a sniper rifle.

Grif: (standing up in front of Simmons) Yeah, sneak attack!

Simmons: Sit down, you dumb ass, I can't see. 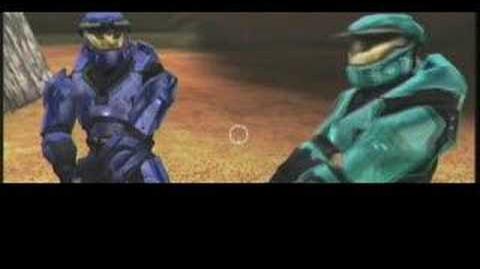 Everything Old is New Again
Original 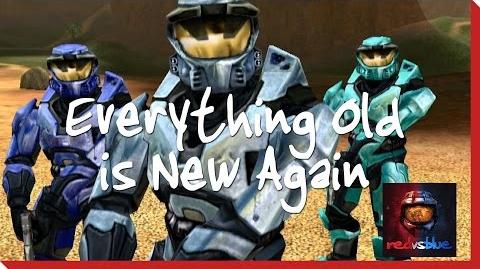 Everything Old is New Again - Episode 20 - Red vs. Blue Season 2
Remastered
Add a photo to this gallery
Retrieved from "https://rvb.fandom.com/wiki/Everything_Old_is_New_Again?oldid=128779"
Community content is available under CC-BY-SA unless otherwise noted.