Evacuation Plan is the fourth episode of Red vs. Blue: Season 9 and the 177th episode overall.

After witnessing Church getting shot, Tucker and Caboose question if they should help him. Caboose concludes that he can't get a good shot of Church from a top the cliff. On ground level, Church tells the Reds that their personalties are all wrong, except for Simmons, who is doesn't seem to have changed at all. Donut decides that he has heard enough and points his gun at Church. In response, Church tells Donut to start keeping a journal or a diary to express himself before limping back to Blue Base. The Reds then begin to discuss Church's nerve. Donut accidentally reveals that he has a diary and leaves to go write about his experience, much to Grif's dismay as Donut tracks mud through the base. Sarge and Simmons continue to talk about Church, saying that while he was talking nonesense, he was so sure of himself.

The scene cuts to the destruction of the Bjørndal Cryogenics Research Facility, with a Pelican, carrying North, South, and Carolina, flying away. Carolina, who is co-piloting alongside pilot Four Seven Niner, answers an incoming transmission from F.I.L.S.S. They begin a conversation about how the Director was right to send Carolina along on the mission, despite North and South's reaction. South straps North into a seat of the Pelican and spots two Longswords following them, who begin their pursuit on the Freelancers and a chase ensues. As the Longswords attack, Four Seven Niner maneuvers the Pelican behind the fighters, avoiding the missiles by deploying flares while performing a barrel roll. South is then soon knocked out at the back of the Pelican, waking up North.

As Four Seven clears North for equipment usage, North straps South into a seat. Due to the damage he received, his helmet malfunctions, so he removes it. North climbs out onto the Pelican's roof and deploys his Domed Energy Shield to protect the Pelican from missiles deployed by the Longswords. The Pelican reaches the rendezvous point, increasing its speed in order to make it, causing North to fall back into the Pelican. At the rendezvous, an energy blast takes out one of the Longswords as the shooter, a Frigate called "Mother of Invention", emerges from behind a group of clouds. The other Longsword tries to retreat, but it is destroyed as well. The Pelican begins to land and F.I.L.S.S. states that medical personel will be waiting in the landing bay for North.

Tucker: One of the Reds just shot Church in the foot.

Tucker: Do you think we should try to help?

Caboose: I don't really see how we can, I can't really get a clear shot of Church from this angle.

Church: Ow, man you guys are a bunch of dicks. I just got this foot.

Church: I just wanna say, that you guys are all mixed up. You're doing it wrong.

Donut: He's in the base cleaning up, he loves to keep things tidy.

Church: No, no, no, see? That's not right, this isn't the way things are supposed to be. It got all confused somehow. Grif isn't tidy at all, he's filthy.

Simmons: He's gonna wash his hands for a week if he hears you say that.

Church: Grif, come on, get out here man!

Grif: I'm doing my second coat of floor wax! That's when the shine comes to life. I'll be out in a minute.

Church: Ugh, Sarge come on, be Sarge, yell at him. Get him out here.

Sarge: Why would I yell at a subordinate? Seems unfair to yell at someone who can't yell back.

Church: This is so lame.

Simmons: I actually kinda like being talked down to.

Church: Okay, seriously? Sarge, come on. You love being in charge, tell these guys to, you know, shape up or do something.

Sarge: Well, I guess they could be doin' a better job.

Sarge: Uhh, I just want you guys to feel like you're reachin' your full potential.

Donut: My potential is so full, I feel like I could fill up a couple other soldiers' potentials.

Church: And Donut, come on, man. This isn't you, you're supposed to be, you know, free spirited. Not some kind of repressed, overachieving jarhead.

Church: Dude, what fuckin' clock are you using? It's only been like fifteen seconds.

Simmons: Yeah? Well, what about me, blue guy? Am I supposed to be different too, you know, someone less nerdy and not lonely every second of the day?

Church: No, you're pretty much spot on, Simmons.

Donut: I've heard just about all I want out of this guy.

Church: Uh, I'm leaving, just remember, this isn't the way things are meant to be. You know it, and I know it. Donut, you're a nice guy. You're not a jerk, try expressing yourself a little bit. You know, like, start keeping a uh, like a journal, or a diary or something like that.

Donut: *clearing his throat* A what?

Sarge: The nerve of that guy. He's just tryin' to get in our heads. Right?

Donut: *mumbling* How did he know about my diary?

Sarge: What do you think, Simmons?

Simmons: Hard to say, sir. He was talking nonsense, but he sounded so sure of himself. I think he should count himself lucky he got out of this one alive.

Cut to the Research Facility being destroyed.

Carolina: I got it, this is vehicle Four Seven Niner, go for secure.

Carolina: The LZ got a little... hot. We may be late for the rendezvous, but we'll get there. Don't leave without us.

F.I.L.S.S: Understood, it sounds like the Director was right to send you along to assist the teams.

Carolina: Seems that way, can't say everyone on board feels the same.

Carolina: F.I.L.S.S, I see a blank spot in the head count. Please verify.

F.I.L.S.S: We will see you at the rendezvous, Agent Carolina. Fly safe, and have a nice day.

Carolina: Roger that, Carolina out. South, check our six.

South Dakota: Heads up, we've got company back here.

Two Longswords fly behind the Pelican.

Four Seven Niner: Who are your friends?

Carolina: Just some people we met at the party.

The Longswords open fire on the Pelican, while Four Seven Niner maneuvers around them.

Carolina fires the missiles, but the Longswords evade them with ease.

South Dakota: Can't you get us out of here?!

The lock on light begins beeping.

Four Seven Niner: Hey South? Do me a favor, would ya?

Four Seven Niner seals the door to the loading dock.

The Longswords fire their missiles at the Pelican.

Four Seven Niner fires off flares to deter the missiles, but still ends up getting hit.

South Dakota is thrown around the loading bay and is knocked out. North Dakota begins regaining consciousness.

Four Seven Niner: Hey, everyone hold on back there. Things are gonna get a little um...

Four Seven Niner flies the Pelican into an ice canyon to try and avoid the Longswords' missiles, to a bit of success.

Four Seven Niner: Whatever you're gonna do back there, do it fast.

The Longswords fire off another volley of missiles, but are blocked off when North activates his drop shield.

The Pelican then starts heading downward towards the ocean.

Carolina: Pull up, pull up!

The Pelican manages to get balanced before crashing into the ocean.

Carolina: There's the rendezvous point, if we're gonna make it, you better punch it.

North Dakota collapses back into the loading bay in critical condition. A yellow beam is shot in the distance, destroying one of the Longswords.

The clouds begin to clear, revealing the UNSC Frigate Mother of Invention, which fires off another beam from where the MAC would be, destroying the other fleeing Longsword.

F.I.L.S.S: We will have medical personnel waiting for you in the landing bay. Welcome home, Four-Seven-Niner.

Carolina: Thank you F.I.L.S.S. Good to be home. 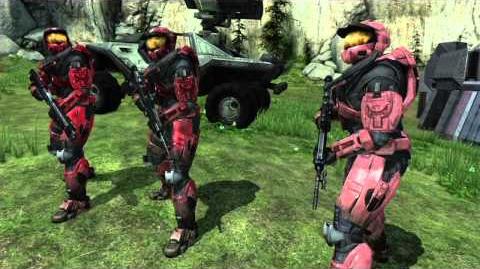 Retrieved from "https://rvb.fandom.com/wiki/Evacuation_Plan?oldid=136948"
Community content is available under CC-BY-SA unless otherwise noted.