Drink Your Ovaltine is the second chapter of Red vs. Blue: Revelation and the 155th episode overall.

Believing something to be wrong at Valhalla, Sarge contacts Simmons. However, back at Valhalla, Simmons and Doc are being held hostage by Washington and the Meta. The Meta begins to have trouble with his Freelancer equipment due to his lack of A.I. fragments to run them properly. Washington tells him not to use all the equipment simultaneously. Doc, hearing about A.I., reminisces with Simmons about how he once had Omega. Hearing the term and hoping to recover the A.I. for his own use, the Meta menaces Doc, and Washington quickly asks Doc which A.I. he had before the Meta tries to kill him. After Doc reveals his ex-A.I. to be Omega, Washington states that it has been accounted for, implying that the whole conversation was a waste of time. Washington then orders Doc to check the Meta's vitals, much to Doc's consternation.

Meanwhile, at the desert, Sarge and Grif manage to contact Simmons by using Epsilon as a transmitter/battery to boost the signal of their warthog's radio antenna. Sarge calls and gets a response from Simmons, who answers Sarge's queries while being held at gunpoint by Washington. Simmons tells Doc that he couldn't say anything to them, and that Grif and Sarge will be running into a trap if they arrive. Though Grif believes that nothing is out of the ordinary, Sarge immediately (and correctly) deduces that Simmons and Doc are taken hostage by Wash and the Meta, and that Donut and Lopez are dead. His reasoning is based on the absence of the key routines of the Red Team soldiers, including Simmons not answering the call correctly, Lopez's maintenance schedule and Donut's social hours. Sarge then orders preparation for a rescue mission, in which Grif immediately sees a flaw with this idea, knowing full well that he and Sarge alone are no match for either Washington or the Meta. Sarge reassures Grif that he has a plan, which immediately makes Grif uncomfortable. When they leave for Valhalla, Epsilon follows them in hopes of learning the truth about his visions.

Fade in to Sarge and Grif in the desert.

Grif: What, the vision?

Cut to Tucker talking to Caboose

Tucker: (from afar) It's a waterfall, it's literally impossible to forget! Like girlfriend dick!

Cut back to Sarge and Grif

Sarge: But this bowling ball seems to be on a heck of a roll! Pun intended. What with the flying and the laser shooting and all.

Grif: And he can lift stuff without arms. That's pretty cool.

Sarge: That too. What if there's something to this whole vision thing? We need to call Simmons. Find out if he's seen anything out of the ordinary.

Grif: How? Our long range radio here got destroyed, and we don't have enough signal power in the jeeps to reach him.

Sarge: I think I have an idea how to fix that.

Simmons: I didn't hit you, they did.

Doc: Great. 'Cause those guys are always such a blast to hang around with.

Simmons: The big one, we call the Meta.

Doc: But rumor had it those guys were disbanded. Everyone went to jail.

Simmons: Yeah, well I guess they got paroled.

Washington: Then you need to stop trying to use all of them. You just don't have the resources anymore.

Simmons: Meta killed a bunch of other Freelancers. Took their equipment.

Simmons: Yeah, and the shield and the thing that slows down time. He also stole their A.I. fragments, but those all got wiped out. Now something seems, I don't know, wrong with him.

Doc: An A.I. fragment? That I remember. Hey Simmons, remember that A.I. I had for a while? That thing was crazy.

The Meta growls and approaches Doc

Washington: You, what did you just say?

Washington: Stand down. You said had. Where is it now?

Washington: Its name. Did you know its name?

Washington: Well that one's been accounted for.

Doc: I-I only had it for a short time.

Washington: Well then good. You know what to look for. I need a complete scan of my friend here. And I would recommend you don't use any needles. He hates needles, and we wouldn't wanna make him angry, now would we?

Sarge and Grif are at the jeep, and Church is at the top of the radio antenna

Church: I told you not to call me that! And hurry it up. This metal rod isn't exactly in a comfortable place.

Grif: Hey, do you wanna find out about your vision or don't ya?

Sarge: Come in Valhalla Outpost Number One. Come in! Red Base, do you read me? Come in! Give me some more power, shotput.

Simmons' voice is heard on the radio

Sarge: Who is this, identify yourself.

Simmons: (over radio) It's me, Simmons. Sorry Sir.

Sarge: How is everything going there, Simmons?

Sarge: Mission is complete. We're preparing to head out soon.

Simmons: (over radio) What was that? Sorry, some static here. This radio's a little messed up. Been a bit rainier here.

Simmons: (over radio) Oh, that's great. Hey, when do you think that'll be, exactly.

Sarge: (over radio) Over and out.

Washington: Okay good. Now get back over there.

Simmons retreats back to Doc

Doc: That was your Sergeant?

Simmons: No, I couldn't say anything to him. If they come, they'll be walking sraight into a trap.

Back to the desert

Grif: Thanks for the help.

Church: Yeah, whatever. I'm not gonna fly straight for a week now.

Grif: Simmons sounded good. I guess he's got everything under control.

Sarge: Donut and Lopez are dead and someone has taken Simmons prisoner.

Grif: What? Everything sounded fine to me.

Sarge: Think about it. How do you answer the radio at our base?

Grif: Thank you for calling Red Base, this is Private Grif, how may I assist you today.

Sarge: And we've drilled that since day one! Simmons answered 'Hi.' That was my first clue!

Sarge: He also said the radio was in disrepair. When has Lopez ever let something go without the proper maintenance?

Sarge: And look at the time.

Sarge: I didn't hear any chinkling glasses. Did you?

Sarge: He also mentioned that the weather was rainier. And as we all know, Mt. Rainier is the biggest landmass in the state of... Washington.

Sarge: How many Washingtons do we know?

Grif: Did he mean, Agent Washington?

Sarge: And who's the biggest mass we know, associated with Washington?

Sarge: So the Meta and Washington have teamed up to kill Donut and Lopez, and now they're holding Simmons and Doc prisoner.

Sarge: Please, Grif, it's so obvious. I don't wanna insult your intelligence by explaining every little detail.

Sarge: Come on- we're going to Valhalla. It's time for a rescue mission!

Grif: Rescue mission? How the hell are we supposed to fight Wash and the Meta?

Grif and Sarge enter the jeep and drive off

Sarge: Don't worry I have a plan. How good are the seatbelts in this new jeep?

Church starts following the jeep at a distance 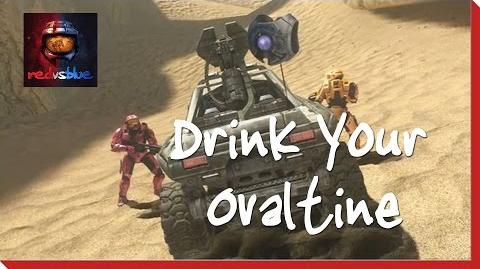 Retrieved from "https://rvb.fandom.com/wiki/Drink_Your_Ovaltine?oldid=145085"
Community content is available under CC-BY-SA unless otherwise noted.