Drafted is the fourth PSA of Red vs. Blue: Season 9.

The PSA begins with Sarge and Caboose talking about emails sent to the Red vs. Blue staff. Sarge explains that some of the most common emails are about implementing the Red vs. Blue characters' voices into the Firefight game mode and adds that they can't do that unless they are sent into Firefight. Suddenly the Announcer says "Set start" and Firefight begins, causing Caboose to remember what his email was about.

In a Firefight session, Church battles on Overlook. He uses the sniper rifle yet he cannot get a kill, missing every time. However, he is able to melee a Grunt and claims it to be a kill with his sniper. He then sticks a Brute to his amazement and picks up a Target Locator, firing it at a Wraith. Church becomes excited again when he destroys the Wraith and all surrounding Covenant, giving him a Killionaire. He switches to his Sniper Rifle and calls out for Tucker to see how many kills he got with it. A Spirit comes in and he complains about having to fight spaceships now. He soon dies exclaiming "Hrrrk blag."

In another Firefight session, Sarge battles on Courtyard. He attempts to kill many Jackals from a distance, but due to using his shotgun, he fails and thus just throws a Frag Grenade at them. He gets closer and begins to kill several Covenant, which he takes pleasure in the fact that nearly all the aliens are orange, but is also in dismay, as the color of their blood is blue, so he wonders if he can kill the aliens' blood instead.

In another session, Doc/O'Malley battle in the Motorcycle on Beachhead. Doc gets a killing spree and claims he hasn't gotten one since his last residency. He and Omega bicker while they kill Covenant. Eventually, while driving the Motorcycle they are killed.

In another session, Grif and Simmons battle in a Warthog on Unearthed. Simmons begins to complain about Grif's speed as he is going too fast. The two bicker, just as Doc and O'Malley did, while they kill several enemies. Simmons gets out eventually and tries to kill Jackals, but fails and retreats, instead killing an Elite via Assassination, exclaiming Sarge would be proud.

Finally, in the last session, Caboose battles on Overlook as he drives a Wraith in circles singing he has a tank. He runs Covenant over and apologizes for it. When asking if they need a ride, he kills even more of them. He gets out of the Wraith and gives them all grenades so they won't be sad. Caboose sticks a Brute with his last grenade; however, the Brute runs at him with the grenade on his head. This knocks him down, after which he says "Ow." He then talks about playing another set.

Fade in to Sarge and Caboose

Sarge: You know Caboose, people are constantly writing us email here at Red vs. Blue.

Caboose: Yeah, I know, I got one today. What, what did, what did it say again?

Sarge: One of the most common emails is for us to put Red vs Blue character voices, in Firefight.

Caboose: Right. Firefight. That was an email.

Sarge: But we don't have any control over the voices in Firefight.

Caboose: No, but the email said we could do some-thing...

Sarge: There's really no way to change that. Unless, you know they just, send us into Firefight or something crazy like that.

Caboose: Oh, I just remembered what the email said.

He misses with the sniper rifle

To close combat, where he misses again

He takes it out with the butt of his gun

Church: That's still a sniper kill. I used the sniper rifle. That still counts. Where- come on there, come here.

He sticks the baddie with a grenade

Church: Oh my God did you see that? I stuck him! That was awesome.

He picks up a target locator and uses it

Church: What does this thing do, laser beam? Big deal. Oh wow, painted it red. Woohoo!

Death from above kills everything in the area

Church: Whoa! This weapon is awesome! Hey Tucker, come here, see how many guys I killed with the sniper rifle.

Church: Oh come on, what am I fighting spaceships now? That's bullshit.

Sarge's view, firing at distance with a shotgun

Sarge: Huh, Someone really needs to improve the range of this weapon. Take that, take that! Come closer and take that! Alright fine, just take this

He lobs a grenade, then fights at closer range

Sarge: There we go! Close range. This works better. I love that so many of these guys are orange. Makes them so enjoyable to kill! Blue blood? Huh, great. Now the only thing I hate more than aliens is their blood! What a dilemma. Wonder if I could kill their blood.

Doc: I haven't had a killing spree since my last residency.

O'Malley: Shut up, you work in a free clinic. Hua huhh, huh. Backing up from an advancing alien

O'Malley: Shut up. It's the appropriate amount of nice.

Doc: Overkill! Isn't it great when you do things together? So much more fun.

O'Malley: Quiet, wet nurse. Puh. In a vehicle, running down three in a row

O'Malley: Yes, line up you fools. Welcome to your doom, hahaha!Crash, die

Simmons' view, with a Grif bonus! Simmons gets in the back of a jeep to man the turret, and Grif gets behind the wheel

Simmons: Hurry up, get in the jeep and drive!

Grif: Don't tell me what to do!

Simmons: Aha, slow down! Sixty-five percent of traffic fatalities are from excessive speed.

Grif: Simmons this is not the time, stop backseat driving!

Simmons: Dude, start it, turn it over!

Grif: Obviously, I'm trying! And they're back on the road again

Simmons: Who knew Grunts were so scary when there're so many of them.

Just Simmons now, with a rifle

Simmons:Yeah, suck it, take that! Ah, it didn't work! Retreat!

He assassinates an alien

Simmons: And around the tree trunk, through the canopy, bring the tree down. Yeahah, Sarge would be proud.

Caboose: Driving, driving, spinning, spinning. Sorry, that's not my fault, someone put your body in my way. Hey do you guys need a ride? Oh, no- sorry, sorry.

Walking with a rifle now

Caboose: Here I will make everyone better. Free grenades, everyone gets one!

Caboose: Don't stop killing, this is just a mistake. Oh, oh how 'bout you guys, do you want free grenades too? Don't worry they are free. And, sticky! You can have the last one! No- no, no no ples-

The last sticky kills Caboose too

Caboose: Is the game over? Can uh someone put in another quarter please?

Church in the Firefight.

Sarge in the Firefight.

Doc and O'malley in the Firefight.

Simmons and Grif in the Firefight.

Caboose in the Firefight.
Add a photo to this gallery 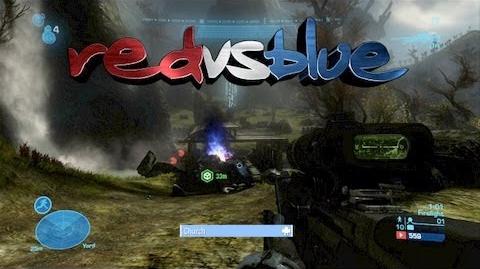 Retrieved from "https://rvb.fandom.com/wiki/Drafted?oldid=140389"
Community content is available under CC-BY-SA unless otherwise noted.