Down, but not Out

Down, but not Out is the twelfth episode of the series.

As Tex attacks Grif, Simmons, and Donut, Caboose watches from afar at Blue Base through the scope of the sniper rifle. Caboose comments on how proficient Tex is at attacking Red Team with Tucker acknowledging the fact and how the accidental death of Church is proving to be a good thing, seeing as how Tex is a formidable replacement, thus making the job easier for them. Tex is then seen entering the bases structure, successfully returning their flag back at Blue Base. Church's ghost then appears behind the two Blues, announcing their flag is back. As Church wonders how they retrieved their flag back, he annoyingly figures out from Tucker that Tex is indeed involved with their exploitations, promptly frustrating him.

At Red Base, Tex is surrounded by Sarge and Lopez after re-capturing Blue Teams flag. After being forced to drop his weapon, Tex is knocked unconscious by Sarge. Up top, Grif regains consciousness after Tex knocked him out from the previous episode. Simmons (overlooking an unconscious Donut) states that Donut will survive his injuries but would need help fast. Grif, at first confused, comments that Donuts head seemingly exploded and that Simmons had fainted in response. Simmons flatly denied that he did then tells Grif to go find Sarge.

Back at Blue Base, Caboose sees Grif entering the Red Base structure and concludes that Tex might be either captured, dead, or both. Church is then shown to be outwardly annoyed that Tex is in trouble. This confuses Tucker as to why he is annoyed seeing as how he hated Tex for the reason why he (Church) never got to marry his girlfriend. Church then clarifies by saying that she was the reason why they never got married and that he never actually hated her, revealing to the Blues that Tex is in fact a female. At the same time, Grif tells Sarge of Donuts condition while Tex regains consciousness. She insults them for breaking her voice filter, which reveals her real voice to them, surprising the Reds that Tex is revealed to be a female. Grif then jokingly claims that only a girl like Tex would give him a major headache with Tex sarcastically asking if they ever saw a girl before.

Fade in to Blue Base. Caboose is looking through the sniper rifle.

Caboose: Man... He is really kicking their asses.

Tucker: How come I never get the fucking sniper rifle?

Caboose: (lowers the rifle) I'm really glad Tex is on our team and not theirs.

Tucker: Sure makes things a lot easier on us.

Caboose: Yeah. I think switching Tex for Church was a good trade.

Tucker: It definitely seems like your killing Church is starting to work out for us.

Tucker: Did Tex get in the base?

Caboose: (raises the rifle and watches Tex enter the base) Yeah.

Cut to the flag stand in the Blue Base. The flag reappears.

Church: (clears throat) Sorry, that was me. I, uh, I guess I had something stuck in my throat. Your flag is back, by the way.

Caboose: (peppy) Hey, Church, what're you up to?

Church: Caboose, (laughs) ah-huh-huh, I'm not really here to make small-talk, okay? How'd you guys manage to get your flag back?

Church: Tucker, who do you think you're trying to fool? Hey, wait a second... Where's Tex?

Tucker: I'm not really sure, he said he was gonna go to the store, something about uh, elbow grease.

Church: Oh great. This is so typical! What was the one thing I told you guys the last time I appeared?

Caboose: (clueless) That Sidewinder is cold..!?

Church: (grunts) What was the OTHER one thing I told you?

Tucker: Not to let him get involved?

Church: Right. And what did you do?

Tucker: ..We let him get involved.

Church: And not just a little involved. How involved?

Cut to Tex in the Red Base.

Sarge: (emerging from the left) Freeze.

Lopez emerges from the right, trapping Tex in.

Tex: You really better hope the first one knocks me out.

Sarge hits Tex with the butt end of his shotgun, conveniently knocking Tex out. Cut to Grif on the Red Base getting to his feet.

Simmons: (stands up from tending to Donut) He's hurt, Grif. He'll make it, but we need to get him some help fast.

Grif: Yeah, yeah, hold on one second. What happened here? W- First Donut's head exploded, and then you fainted, and then some black thing showed up and started-

Simmons: Whoa, whoa, whoa, wait. I did not faint, something knocked me out.

Grif: Okay fine, keep lying to yourself. Whatever helps you sleep at night.

Grif: Yeah, sure. Oh, and uh, I'm fine by the way. Thanks for asking. (runs down the ramp)

Simmons: Whatever, no one likes you anyway.

Cut to Caboose looking through the sniper rifle at Grif entering the Red Base.

Caboose: Yep, he's definitely captured... Or dead... Captured or dead. ... (inhales sharply as he has an epiphany) Or captured AND dead!

Tucker: What!? What is your problem!? Why do you even care if he's captured? I thought you hated that guy anyway for stealing your girlfriend.

Church: I never said I hated Tex. I just said that she was the reason why we never got married.

Cut to inside Red Base with everyone but Donut present.

Simmons: Sarge, we need to get Donut air-lifted outta here.

Sarge: Could you put that in a memo and entitle it "Shit I already know!" Get on the horn with Command! (turns to Tex) Well, look who's up. Rise 'n' shine, buttercup.

Tex is standing, sparks flying from the right shoulder, jerking it back. There's a brief sound like a distorted voice.

Grif: Ah-ha! I knew it! Only a chick could give me a headache this big!

Fade to black. There's a moment of silence.

(Tex says this in the Earlier Version)

Tex: ...What's the matter? You never seen a girl before? How long have you guys been out here? 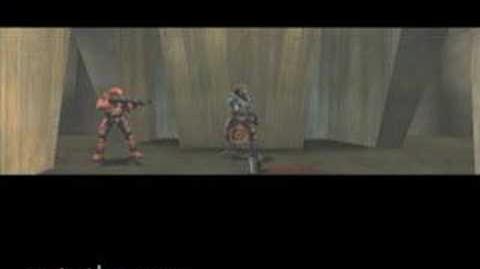 Down, but not Out
Original 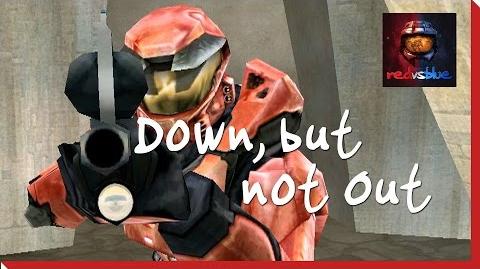 Down, but not Out - Episode 12 - Red vs. Blue Season 1
Remastered
Community content is available under CC-BY-SA unless otherwise noted.
Advertisement