Don't Ph34r the Reaper is the eighth episode of the series.

As the Rookie figures out how to activate the auto-fire sequence in the tank, Grif and Simmons stand there motionlessly until Simmons tells Grif to make a run for it together at the count of three. At the same time, Church tells Tucker he is going for the Reds' warthog. While Simmons slowly counts to three, Grif leaves early and starts running towards the warthog, only for Simmons to notice after he finishes counting, in which he is annoyed.

Once the Rookie manages to activate the auto-fire mechanism, the tank deactivates the tutorial mode and begins to systematically target and destroy everything present. Sheila, the tanks artificial intelligence (AI), subsequently hits the warthog, sending it flying, before Grif and Church make it to the vehicle.

Church retreats back to the rock and both Grif and Simmons continue to flee in panic. They quickly and successfully evade the ongoing cannon fire and hide behind a rock, with Simmons thoroughly angered towards Grif. Noticing that the Rookie is operating the tank, both Church and Tucker praise him, but Church unexpectedly becomes the next target, however, and is killed when the Rookie fails to deactivate Sheila's auto-fire sequence in time; Tucker then accuses the Rookie of team-killing.

Sheila's turret is pointed at Grif, then it turns to Simmons.

Grif: Why is it just sitting there?

Simmons: Just trying to mess with our heads. Let's get back to the Warthog.

Sheila: This tank is equipped with an auto-fire sequence that can be activated by pressing the auto-fire button.

Sheila: (in the background) This will end the tutorial, and should only be activated if proper safety procedures-

Grif: Wait. On three? Or three and then go?

Simmons: On three. It's always faster to go on three.

Church: I'm going for the jeep. Cover me.

Cut to Simmons and Grif. Grif is backing away.

Grif turns around and starts running away. The view cuts to Sheila's HUD, her crosshair following Grif.

Cut to Church running toward the Warthog. He's panting loudly.

Sheila fires and blows up the Warthog right in front of Grif.

Simmons: (crouches next to Sheila) Son of a bitch!

Grif: SON OF A BITCH!

Church: (near the explosion) Son of a bitch!

Cut to Church running back up to meet Tucker.

Church: No kidding. Thanks for the update, Tucker.

Cut to Grif and Simmons hiding behind a rock.

Simmons: (mocking Grif) Hey, I have a GREAT idea. Let's get out of the jeep and sneak around the back of the rock.

Cut to Sheila's HUD looking over the rock.

Her crosshair starts panning up and to the left.

Cut to Church and Tucker with Church standing in the open looking down at the tank.

Church: Hey, Tucker, look at this, man - it's the rookie! And he brought tank out to scare off the reds.

Tucker: What? No way!

Church: Hey, rookie! Good job, man! Why didn't you tell us you knew how to drive the tank?

Cut to Sheila's HUD, her crosshair slowly panning up the cliffside at Church.

Cut to Caboose in the driver's seat.

Church is shot and launched into the air. His body hits the rock face and lands back on the ledge. Cut to Tucker.

Tucker: Holy fuck! Church, are you okay? Talk to me! Church!

Cut to Sheila. Tucker is visible on the cliff in the distance as he yells at Caboose.

Tucker: Church! It's going to be okay, man.

Tucker: What is it?

Tucker: Yeah, I know you did. Now hurry up and die, you prick. 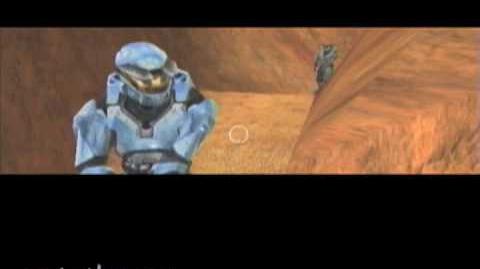 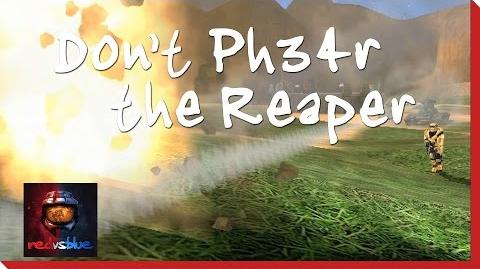