Don't Get Me Started is the first chapter of Recreation and the 135th episode overall.

In Valhalla, Sarge practices his version of psychological warfare on Caboose, by telling them the Reds are going to attack. Simmons doesn't understand this and says they should just do it. Sarge responds saying there is an order to war. Grif wants to milk this assignment so he uses reverse psychology to get Sarge to call off the attack. At Blue Base, Caboose is seen welding something, but no other hints are given. Sarge calls Command for orders regarding the Blues and they tell him they have no record of the Blues.

When Sarge relays this information, Simmons remembers that they erased the Blues from Command's database during Reconstruction. Sarge then remembers, incorrectly though, that he was the brains behind the removal of the Blue's information, that he shot and killed Grif, and that Simmons transformed into a motorcycle which he used to escape, while Caboose and Jenkins were wishing they were on Red Team. Simmons tells him that that was not what really happened and Grif asks that if it did happen, why was he still alive. Sarge says he asks himself that question every day.

Sarge: Attention: Blue Team! This is the Red Team! We are here to destroy you! Your long reign of being the shittiest team around is about to come to the sudden and cataclysmic end! We will give you a few moments to suck in the horrors of this announcement! And then return for your reaction. Be right back!

Sarge backs down towards Red Base, where Simmons and Grif are standing.

Sarge: Hehe. Alright, that oughta scare the bejeebus out of them!

Simmons: Actually, sir. Since it's just one of them over there—

Grif: And the one is an idiot…

Simmons: —I don't really see the point in psychological warfare.

Sarge: You're right, Simmons. It's not really accurate to refer to one person as a team. What’s better? Blue Person? Blue Man? Bluetonian?

Simmons: What I meant was—

Simmons: …What I meant was, I don’t see the point in announcing to him that we’re gonna attack. Why don’t we just do it?

Sarge: There’s an order to this, Simmons. We can’t abandon protocol just because we have an advantage! We have to give him a chance to see the errors of his Blue ways! To lay down his arms and meet his fellow men at the table of peace, where we can work together towards a better world. A world that’s better, because we poisoned his food at that table, and stabbed him in the eye with a fork. And taken all his stuff.

Simmons: … Dibs on the computers.

Sarge: Noted. Now watch that base. Tell me if anything changes.

Simmons: I just wanna say, I’m glad I was here to see you on your day of victory. It’s been a long time coming.

Sarge: Yes it has, hasn’t it? My skills as a leader have really taken us far. It must’ve been quite an honor to serve with me. (pause) Ah… okay. Glad we had this talk.

Simmons: [hopeful] Are you glad I’m here too, Sarge?

Sarge: Of course I am.

Simmons: I knew it! I just could—

Sarge: The squad’s kill-death ratio is the most important measurement when evaluating sergeants! If you had died, that would’ve hurt my numbers.

Simmons: (sniffs; walks off) (dejectedly) Glad I could help!

Sarge: It’s better to keep a little padding in our stats! That way, if we’re far enough ahead, I can stab Grif in the face, and still stay in the lead.

Sarge: Right where I want you: within face-stabbing range!

Sarge: Lopez, how are those vehicle repairs coming?

Sarge: Got an ETA?

Sarge: As long as they get it ASAP! Cuz I need it PDQ!

Lopez: En ese caso, nunca menos uno. [In that case, never minus one.]

Simmons: (watching over the Blue Base) Still just one Blue, sir.

Lopez: ¡Ya hablaste conmigo, idiota! [You already talked to me, jackass!]

Sarge: (runs back to the hill) Hey, Blue! Don’t think we’ve forgotten about ya! Still gonna kill ya any second! (heads back towards his base) Count on it!

Grif: Sarge, have you thought this invasion all the way through?

Sarge: Of course I have! We beat the Blues; we win, you suck. That’s all the way through.

Grif: Uh, and who do we fight then?

Sarge: We fight… with other Blues!

Grif: But what if no more Blues come? I mean they haven’t sent reinforcements yet. What if they never do?

Simmons: Why would you want more Blues?

Grif: Well, we have this new base and all this new equipment. Who else are we gonna test it on?

Simmons: Who cares!? The war would be over!

Simmons: I think the word you’re looking for is treason, sir.

Grif: Never mind, Sarge. I was wrong. If the war’s over and we win, well that’s just great.

Sarge: Of course it would be!

Grif: I mean, no more early morning runs. No more training exercises. Why would we need to do any of that stuff, right? We won!

Grif: And all this new equipment—we can just let them fall into disrepair. I mean, we don’t need it! We won’t even need to test it, because we’re winning. We’re about to make it all obsolete.

Grif: And just think about this, Sarge! No more boring staff meetings! Ever!

Sarge: (groans some more; runs back to the hill) Hey, Blue! There’s uh, gonna be a slight delay in your destruction! Hang tight! (to Grif and Simmons) Maybe I should call our new command. They’ll tell us what we should do.

Grif: Heh, yeah, the old one was so great, the new one’s gotta be even better.

Sarge: Command! Come in, Command! This is Blood Gulch Outpost-… wait… I mean, Simmons, what’s the name of this place again?

Sarge: Valhaldagir-jangle-callit... thingy... Outpost Number One! Do you read? Come in! I need advisement on what to do about Blue Team!

Simmons: What are you doing?

Grif: What do you mean, what am I doing? We have one enemy here. We can milk this for years!

Caboose waltzes up to Simmons and Grif, who fail to notice him. He looks back and forth between who’s talking.

Grif: If we beat them, Command will just send us to some new base, where we have to fight a real team.

Grif: So!? Do you want to fight one shitty enemy, or five real enemies?

Grif: You want me to help you subtract one from five? I know that’s tough for you.

Simmons: What are you doing here!?

Caboose: Just gettin’ parts from the crashed ship. What are you guys up to?

Grif: We’re deciding whether or not to kill you and wipe out your team forever.

Caboose: Do I get a vote?

Simmons: No! G-Get back to your base! Stop wandering around during your defeat. It’s confusing!

Caboose: Oh! Okay. Sorry! (begins to head back towards his base)

Simmons: And what are you workin’ on?

Caboose: Still not telling you!

Sarge: They said they didn’t even have record of a Blue Team. Nothing on Blues at all in their computer system.

Simmons: We deleted them, remember? From Command computers. We wiped them out.

Cuts to a flashback. Grif and Sarge are standing behind Simmons, who is looking at a computer.

Sarge: Simmons, execute the hypotenuse initiative, and delete the Blues.

Simmons: (presses a switch) Done! The Blues now never existed. I also upgraded your pay scale while I was at it.

Sarge cocks his shotgun and shoots Grif in the head. Grif falls over.

Grif: Blarg! I am dead, but that’s okay, I don’t deserve to enjoy victory. My life has meant nothing.

Sarge: What a great day! Simmons, transform into Motorcycle Mode.

Sarge: Let’s get out of here. (hops on motorcycle-Simmons and drives outside) Yee-haw!

Grif: That’s not what happened!

Sarge: Of course it is.

Grif: Then how am I still alive?

Sarge: I ask myself that question every day. (pauses) Moto-Simmons! Run him over.

Caboose: I wish I was on the Red Team, don't you Jenkins? 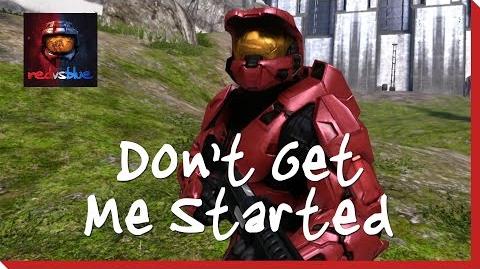 Retrieved from "https://rvb.fandom.com/wiki/Don%27t_Get_Me_Started?oldid=144346"
Community content is available under CC-BY-SA unless otherwise noted.