Deja View is the third PSA released during Red vs. Blue: Revelation. It is also the first time Red vs. Blue is filmed within the Halo: Reach engine.

The Reds are shown having a staff meeting, and Sarge announces to Grif and Simmons that they are going home. Grif gets overexcited when a Hornet comes to pick him up. Simmons tells Grif that this may be the last time they see each other forever, however this only excites Grif further. Grif continues his joy as he says goodbye to the Blues, who then open fire at him from the ground.

Once Grif is dropped off at "home", he discovers Simmons and Sarge once again. Sarge tells him that they are home: they have their old canyon back. Once Grif is through stifling some tears, after activating his armor lock Sarge demonstrates a "new way to greet people" he discovered. Sarge proceeds to stab Grif in the head.

Simmons offers Grif a tour of new Blood Gulch. The tour includes showing off some new vehicles; Grif calls dibs on the jeep with a rocket turret. Then Simmons takes Grif past the cliffs, teleporters, the "nook" in the side of the canyon, and the tree that Simmons and Grif carved their initials in, though Grif believes it wasn't him. Grif notices the canyon seems a lot greener than he remembered, with grass growing all around. Simmons may have left the sprinklers on when he left as the two are shown standing in a large puddle.

When Church opens fire with the sniper rifle, Simmons remembers to mention the Blues are there too. Caboose reminds Church he missed, but Church doesn't need the reminder. Simmons and Grif take cover behind a rock, where Simmons demonstrates a new armor ability: producing a hologram of himself. Church finally hits Simmons, but is disappointed when he realizes it was only a projection. A bonus second use for the hologram is giving Simmons someone to talk to.

Sarge uses a jetpack to fly out of Blue Base with the flag and then the Blues start to attack. Caboose grabs a Banshee and attempts to pursue, however Sarge has already flown to one of the canyon's upper ledges. The camera pans pack showing Sarge high on the cliff ledge, overlooking the spacious canyon, while Simmons remarks, "This place is a little ... bigger now."

Fade in to a view of the Red base in Valhalla, where Sarge addresses Grif and Simmons.

Sarge: Men, I've got a big announcement from Command.

Grif: Oh great, I'm sure this is going to work out well for us. Let me guess Sarge, they discovered a revolutionary new way for us to scrub toilets.

Sarge: Just got the message from Command, we all get to go home.

Grif: Are you sure Sarge? Because if you're lying to me, that would be a really cruel trick, I mean even for you. And you're kind of a dick... sir.

Sarge: Got our orders right here. They read: 'Congratulations STOP You are all going home STOP Transports are en-route STOP Thank you for your service STOP This message will now stop STOP.

Simmons: Did they send the message via telegram?

Grif: Who cares Simmons? We're going home! The war is over!

Simmons: Yeah, I did. Did you? Because it didn't say anything ab-

A Hornet lands nearby.

Grif runs over to the Hornet and addresses the pilot.

Grif: Are you here to take us home?

Grif gets onto the side of the Hornet.

Simmons: (sighs) Grif, I guess this is it, we'll never see each other again.

The Hornet takes off.

The Hornet flies over the middle of the canyon, where Blue Team members Church, Caboose and Tucker stand looking at the Hornet.

Church and Caboose open fire on the Hornet, Tucker jumps up and down while swinging his sword.

Grif: (throws a grenade) Goodbye guys, I hate you too!

Caboose: Aw, he's just saying that to be nice.

The grenade detonates in the center of the Blue Team members. Cut to black. Fade in to the Hornet, now a Falcon, which lands in a grassy area. Grif hops out.

Grif: Thanks for the lift soldier!

Pilot: Get away from the cockpit, jackass.

Grif: No problem bud. Why'd we stop here? What is this, some kind of way station?

The Falcon takes off, revealing Simmons standing there.

Grif: (to the Falcon) So, where do I catch the transport home?! Hey, come back!

Simmons: Grif, you made it.

Grif: Simmons? What are you doing here?

Simmons: This is our new base.

Grif: New base? I though we were going home!

Sarge emerges from the nearby Red base.

Simmons: Look! We got back our old canyon!

The camera reveals a full view of Blood Gulch, with the Falcon leaving its boundaries.

Simmons: What do you think Grif? Grif?

Sarge: Okay, well that's taking it a bit far. Unbridled emotions are unbecoming of a soldier. I can handle emotion, but I won't stand the unbridledness!

Grif: What was that?

Simmons: That was your Armor Lock. We got more than just a new base, we got new armor and equipment too.

Sarge: I even discovered a new way to greet people.

Sarge runs behind Grif, grabs his shoulder and turns him around. Sarge raises a Combat Knife and stabs Grif through the mouth. Grif falls to the ground.

Sarge: Hello, and welcome to our new home, dirtbag!

Simmons: Come on, let me give you a tour.

Sarge: (chuckles) Grif must feel right at home, he's already lying down on the job.

Simmons walks over to two Warthogs, both sporting different turrets: gauss and rocket.

Simmons: See, we got all new vehicles.

Grif: Dibs on the rocket one!

Simmons: And the cliff is back.

Cut to the top of Red Base

Simmons: And here's the tele...(goes through the teleporter and shouts)...PORTER!

Grif: That'll save time on my commutes.

Simmons: And look, there's the caves!

Simmons: And here's the little nook. I don't really know what that's for.

Grif: You can put stuff in it.

Walks to a tree near the caves

Simmons: Check it out! There's the tree where we carved our initials.

Grif: I don't think that was me, dude.

Standing in the middle of the canyon near Red Base

Grif: Everything seems greener than I remember.

Simmons: I think I might have left the sprinklers on when we left.

Simmons: Yeah. Sarge is gonna be pissed when he sees the water bill.

Inside the cave near Red Base

Simmons: And there's the caves.

Simmons: The point is, it's all here. And just wait till you see what's outside the canyon!

Grif: Outside the canyon? (A sniper bullet zings past their heads)

Simmons: Oh yeah, the Blues are here too.

Caboose: You missed him!

Caboose: Hit a rock that time!

Cut back to Grif and Simmons

Grif: Should I use my Armor Lock thing?

Simmons: No check this out! (Creates a holographic projection of himself) Look what I got! It's a hologram. Pretty cool huh?

The hologram stops and Church snipes it in the head

Church: I GOT HIM! (snipes him again but it fades away) Oh damn it. Man, I hate that thing! (Reloads)

Church shoots at Grif and Simmons but the bullet misses

Simmons: And the best part is, now I have someone to talk to.

Holo-Simmons: We have all the same interests. For instance: I love obscure comic books and number theories.

Simmons: Oh, man. Those things are the best!

Grif: Suddenly it's not as cool as it was ten seconds ago.

Simmons: And another great thing is that the Holo-Simmons is available whenever I need him. The only problem is that the manual say that if I play with him too much, I can go blind. I don't think that's true though.

Simmons: No I'm the real one.

Holo-Simmons: You are?! But I have so many memories. My first kiss, graduation, my wife and kids. It has to be real! It has to be! What does my life meaaaaan? (Fades away)

Simmons: Yeah I forgot to mention, they become self-aware after a few minutes.

Grif: That was kinda creepy.

Simmons: Yeah...we should let Bungie know about that!

Grif: Sounds like he had a better fake life than your real one.

Simmons: (annoyed) I don't wanna talk about it.

Church: Get him! (fires Sniper rounds at him, clearly missing) He went that way! He's got our flag!

Cut back to Grif and Simmons

Cut to Caboose entering a Banshee

Caboose: I'll get him! (enters Banshee)

Simmons: Maybe he's taking the long way back to base!

Sarge is seen standing on top of a mountain wall surronding the canyon with Caboose flying the Banshee in the background. The flag shows the words Bungie written across it.

Grif: Hey Simmons! When you said, 'outside the canyon' before, what exactly did you mean?

Simmons: This place is a little...bigger now.

Sarge: Now that's what I call a view. Where the heck did I park? This place is huge! I know I was in the Traxus lot.

Fade to a black with the words Halo: Reach 9.14.10 showing. An eagle screeches at Sarge

Sarge: Get out of here, you stupid Eagle! Find your own enormous map!

Sarge: I understand that I'm very high up, you don't need to beat me over the head with it! 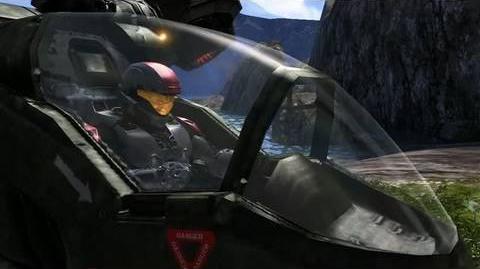