Defusing the Situation is the seventeenth episode of the third season and the fifty-fifth of The Blood Gulch Chronicles.

Andy starts talking to the rest of the Blue Team, and is quickly revealed to be rude and volatile. Caboose and the Blues try to calm him down so he won't explode. Meanwhile, the Reds are planning on escaping in the Warthog to find the source of the distress signal. Grif is sent to find out what the Blues are doing, only to be confused when he finds them trying to soothe Andy. Unbeknownst to all, O'Malley and Lopez have assembled a huge army of robot Lopez duplicates outside the base, which he orders to kill everyone and to retrieve the "device."

Fade in to the Blues

Tucker: You're trying to tell us that this bomb can talk.

Andy: Yeah, and I'm standing right here. You can talk to me.

Tucker: If you could talk this whole time, then why didn't you just... wait, why'm I talking to a bomb? I'm not doing this.

Andy: What, am I not good enough to talk to? Who do you think you are, some kind of "too good to talk to a bomb" type?

Church: Maybe it's a good idea not to piss off the explosive device.

Church: I wasn't talking about you Tex.

Tucker: Did Gary say anything about the bomb being able to talk?

Church: Uh, just that this whole place is going to be destroyed by us, and that Andy here is probably the thing that does it.

Andy: I don't think so. Bunch of shisnos if ya ask me. And no one did ask me which I find insulting!

Andy: Don't tell me to calm down, I am calm!

Church: Caboose, calm this thing down before it has a meltdown.

Caboose: Andy, everyone here is your friend. And no one wants to hurt you.

Caboose: Come on Andy, think of a happy place. Now what makes you happy?

Andy: Being in the middle of a huge explosion!

Tex and Tucker: NO!

Church: (at the same time) Duck!

Cut to the Reds, Simmons in the Warthog and Grif next to it

Simmons: Okay. I'm ninety-five percent certain that the distress signal is coming from that way.

Simmons: Grif, if there's one thing that I've learned in working with you, it's that there's always margin for error.

Simmons: Seriously, if I ever meet the guy that assigned you to our squad, I'm gonna kill him.

Grif: Well if you're ninety-five percent certain it's that way, which way's the other five percent?

Simmons: Whaddaya think, all the other directions.

Grif: Then I think that's the way we should go.

Simmons: You might be the dumbest person I have ever met.

Grif: And I think you're just covering your ass.

Simmons: What? I'm not covering my ass, you're the one trying to cover yours!

Sarge: Stop arguing you two. Simmons isn't covering his ass, and Grif certainly isn't coverin' his. No one's ass is being covered. Got it? Donut, what d’ya want?

Donut: Uh... is that a trick question?

Donut: Well, I was up on the windmill again, and I think I found a route we can take outta here.

Sarge: Great! Simmons, load up. Donut, you back up Simmons.

Sarge: Grif, you get in the base and distract the Blues while we get ready to leave.

Grif: Mmm, okay, be right back.

Simmons: Grif!? Don't you remember the last time you sent him to distract Command during our surprise inspection? He told them we were all in the base doing last minute cleaning, because we all had cholera, and we were in quarantine for a month. My ass still hurts from all the shots we got.

Donut: Yeah, you could say that again, mine hurts too!

Simmons: You weren't even there, Donut.

Donut: Oh. I thought we were just sharing stuff.

Grif: (from near the base) Wait a second, you guys better not just be sending me so you can run off once I'm inside!

Sarge: Of course not moron, now hurry up!

Grif enters the base

Sarge: Okay, everybody in the jeep.

Cut to Grif entering the base, eavesdropping on the Blues

Caboose: You are in a cool river, where no one disturbs you, or calls you names. Like "Bomby." Or, "The Exploding Jerk." There are sheep nearby, the kind that don't blow up, you are happy. But not overly happy... Regular happy.

Andy: I already heard that one.

Grif backs cautiously out of the base of crazy people, and returns to the Reds

Sarge: And when we get there, we'll radio Command and say we need a replacement, because we have absolutely no idea what happened to- oh Grif!

Simmons: What're you doing back so soon? That was the shortest distraction of all time.

Sarge: What's wrong? What were the Blues doing?

Grif: You know? I can honestly say I have no idea what I just saw. Can I quit the army now? Seriously, I think I've seen everything I need to see at this point.

Sarge: If only I could make that happen dirtbag.

Grif: I mean it, just tell me where to turn in my gun, I'm done.

Camera zips around the terrain, through some nooks and one cranny, to the Lopez head and a robot army

Doc: I like that we have a no fool discrimination clause. It makes us progressive!

O'Malley: Shut up you fool. 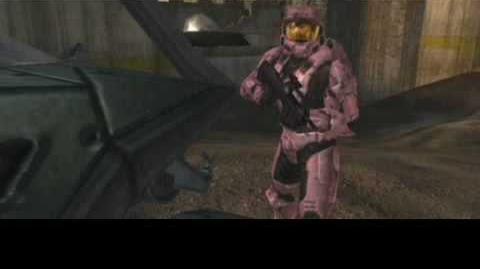 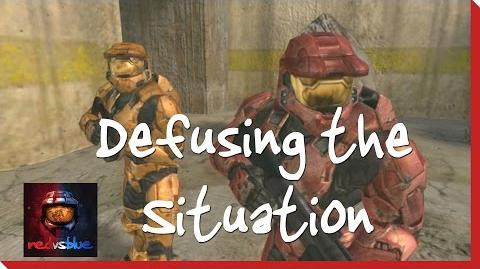 Defusing the Situation - Episode 55 - Red vs. Blue Season 3
Remastered
Add a photo to this gallery
Retrieved from "https://rvb.fandom.com/wiki/Defusing_the_Situation?oldid=135570"
Community content is available under CC-BY-SA unless otherwise noted.