Dealer Incentive is the eighteenth episode of the second season and the thirty-seventh of The Blood Gulch Chronicles.

The Blues attempt to interrogate Donut without much success. Church then possesses Donut and, using him as a hostage and a puppet, negotiates with the Reds to have them build new robot bodies for himself and Tex. While Tucker continues to haggle with Sarge over the specifications for the robots, Church leaves Donut's body and returns to Blue Base to find that Lopez and Sheila are missing.

Tucker and Caboose have Donut surrounded inside the blue base.

Tucker: So, they send a female assassin to try and kill us. Clever, but it won't work. We're immune to your feminine wiles. ...Unless you wanna date one of us.

Caboose: How is that pink armor anyway? Looks comfortable...

Donut: At first, I really hated it. But it's kinda grown on me. My old armor used to chafe my thighs somethin' aweful. But the crotch in this pink one is surprisingly roomy!

Sarge: Good Bhudda's noodle, how could this have happened?

Simmons: It's okay sir. It was a strong plan, Grif's just a dumbass.

Sarge: Settle down, ladies. We need a new strategum, and we need it fast.

Simmons: Donut's sure to crack under the pressure and reveal everything.

Grif: Everything like what, where we keep his tampons?

Sarge: You're right about that, Simmons. The boy doesn't even see the entertainment value in being tortured! Oh these kids today!

Church enters the blue base with Tucker waiting for him.

Church: How's it goin', Tucker? We get any useful information outta the prisoner yet?

Tucker: I figured he was here to steal back Lopez, but he won't give us anything... except a list of crock pot recipes. Would that be useful?

Church: Do we have a crock pot?

Tucker: No, Caboose made a trade with that annoying guy from Blue Command. He swapped it for a mystery box.

Church: What was in the mystery box?

Tucker: A hundred and forty jars of mayonnaise.

Tucker: Yeah it doubles as a great sunscreen.

Church: How did you- never mind. Listen, I think I came up with a plan for how we can use Lopez and our new prisoner to get an upper hand on the reds...

Church: The plan does not involve mayonnaise.

Tucker: Dammit, I knew there would be a catch.

Camera zips around to another part of the blue base, where Caboose and Donut are.

Caboose: That was fun. Okay, okay, your turn. Truth, or dare.

Caboose: Okay. Tell me, all of the red secret plans!

Donut: Ahaw, you tricked me! You blue guys are so smart. Okay, now listen closely. Our biggest secret is-

Church runs up and inhabits Donut.

Church: Caboose! It's me, Church. I possessed this guy so we can... whoo, hey. This pink armor's kinda comfortable. Roomy. What were you two guys talkin' about?

Cut to Tucker cresting a hill in the Gulch.

Church: We would like to talk to you about-

Church: Shut up you idiot, we're not here to fight. We're here to negotiate.

Sarge, Grif and Simmons come to the front of the red base.

Sarge: What the- Donut! What is this!?

Tucker: I think he's talking to you.

Church: We, uh I mean they, would like to negotiate a surrender, to us. No to them, no wait nono that's right, to them, to us.

Sarge: What's this business, the blues are givin' up? I smell a trap, or a rat... or a rat, in a trap. Don't accept it Simmons.

Simmons: You can't surrender blues, we haven't attacked you! Now go home and wait for us to attack, and then you can surrender.

Grif: I don't know, the war, er something. Right?

Simmons: You're an idiot.

Church: In exchange for not killing us, they, them- we, they would like to, release the robot guy, and me. (exchanges glances with Tucker a couple times) ...the pink guy.

Tucker: Are you becoming retarded?

Simmons: What should we do, sir?

Sarge: I'm torn, between my intense distrust of the blue team, and the need for the plans stored in my favorite robotic creation. No offense, Simmons.

Simmons: Nooone taken, sir. You removed the negative emotional center of my brain, and implanted it in Grif.

Grif: (hopping around behind them) Noh I kin, I just can't take this, we're all gonna die! Wohouw.

Church: I don't think they're going for it.

A shot goes behind Tucker, startling him and Church... wouldn't it startle you?

Simmons: (holding the sniper rifle) Okay, now you're under attack. Go ahead and surrender, bitch!

Sarge: Now that you have been thoroughly humiliated by our superior military strategy, we demand the return of our robot, and our pink private!

Church: Okay, but there's one catch!

Sarge: What in shinola?

Church: Sarge they want you to build two robots for their team. One for each prisoner, that they're releasing.

Simmons: Hey that wasn't part of the deal!

Grif: Why exactly are we negotiating with Donut?

Tucker: Church why do we need two robots?

Tucker: Oh man, don't tell me you're doing this for Tex. You're still in love with her, aren't you.

Church: Hey get off my back, man. Most dead chicks aren't exactly linin' up to haunt this dirthole. Besides, if I don't get her a body, she's gonna steal mine anyway.

Sarge: Alright you blue scumsuckers! What robot models did you have in mind?

Church: I guess make 'em just like Lopez! Except, you know, just a shell, no intelligence!

Church: Oh and no Spanish! And a bigger switch!

Sarge: Okay, we got a deal! Meet us in the center of the canyon at 0600 and we'll make the exchange.

Church: Okay. I gotta hurry back before Lopez and Sheila suspect anything. Make sure this pink guy doesn't run away when I leave. I mean it. I'll meet you guys back at the base. (leaves Donut's body)

Donut: Huwhuuugaygaayeeeeeee! What the...? Where am I?

Caboose: We were just talking to your friends. But you're going to stay with us now for a while.

Donut: Are we gonna have a sleepover? Because that would be sweet.

Cut to Ghostly Church back at the blue base.

Church: Alright guys, I- Sheila? Lopez? What the, why do people keep leaving?

Back to reds and blues.

Sarge: Oh blue team... Before you go, maybe we should talk about optional equipment on your new robots.

Sarge: All you said you wanted was a body, we didn't talk about featuuuures.

Sarge: You know, undercoating, extended warranty, features, man, come on. Like do you want them to be able to use both arms at once?

Tucker: What? Oh man, I told Church they would try to screw us! What about the feet?

Sarge: Did you want feet?

Tucker: What's on the bottom of its legs?

Tucker: Oh man, what a ripoff.

Sarge: You look like a nice guy, don't worry, we'll work something out. Have you thought about financing? How's yer credit? I can offer you a free set of high quality mud flaps... and a lube job... You won't be disappointed! I've been told my lube jobs are fantastic! 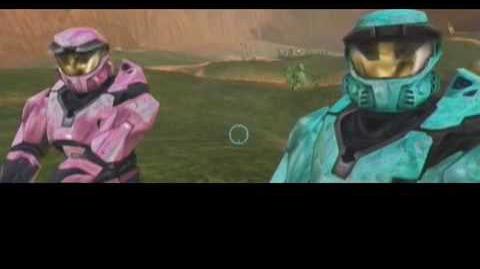 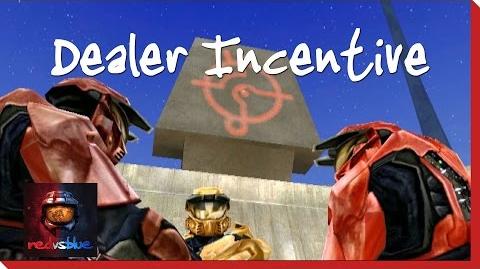 Dealer Incentive - Episode 37 - Red vs. Blue Season 2
Remastered
Add a photo to this gallery
Retrieved from "https://rvb.fandom.com/wiki/Dealer_Incentive?oldid=142598"
Community content is available under CC-BY-SA unless otherwise noted.