Check Out the Treads on That Tank is the seventh episode of The Blood Gulch Chronicles.

Still being fired upon from the previous episode, Church and Tucker lament on their current situation while still behind the rock, with Tucker commenting on how it was probably a good idea to bring the tank in the first place.

Back at Blue Base the Rookie contemplates on whether or not to stay or to leave to go help his team with the tank. He eventually decides to take the tank and quickly hops in. The tank's artificial intelligence welcomes the Rookie in the M808V Main Battle Tank and formerly introduces itself as Sheila, and runs him through the tutorial mode.

In an attempt to sneak up on the Blues, Grif and Simmons erroneously leave the warthog in the open and unsuccessfully try to go around the rock by taking a nearby cliff. Seeing that the Reds have abandoned their vehicle, Church and Tucker attempt to steal it. Whilst trying to find another way around the rock, the Rookie drives up behind the Reds and takes aim at Grif, in which both he and Simmons take notice.

(From an earlier version of the episode.)

Church backs in to frame from the left.

Church: Uh, hey dude, we didn't have a video last week. We were at E3, remember?

Narrator: I mean, week before last...

Caboose is looking through the sniper rifle at Simmons in the back of the Warthog firing at Church and Tucker.

Church and Tucker are behind a rock with bullets hitting the canyon wall behind them.

Church: My god, doesn't that thing ever run out of bullets?

Tucker: You know, in hindsight, we should have brought the tank.

Church: Hey, Tucker, what good is a tank gonna do us if nobody here knows how to drive it?

Tucker: Yeah, I can see how hiding behind a rock is a much better strategy.

Cut to Caboose hopping in the tank. As the canopy closes, the tank turns on.

Tank: Hello, and thank you for activating the M808V Main Battle Tank. You may call me Sheila.

Sheila: Would you like me to run the tutorial program?

Sheila: Tutorial program activated. This program is intended to instruct non-certified personnel in the use of this Scorpion class tank. Let's begin with some driving.

Cut to Simmons firing the Warthog's gun with Grif on the ground behind him.

Simmons stops firing, and steps down.

Grif: Man, that thing is loud.

Sheila drives by in the background.

Grif: Come on, let's sneak around the back of the rock and get 'em out.

Grif: Keep it down! Jesus. Let's go, before they figure out what's going on.

Cut to Caboose having Sheila stranded on a tall rock and turning to try to get off.

Sheila: Now that you've mastered driving the M808V, let's move on to some of the safety features.

Caboose: No, no, wait, go back! Why are there six pedals if there are only four directions?

Cut to Church peeking out from the side of the rock. Tucker is still standing behind it.

Tucker: Why are you whispering?

Cut to Simmons and Grif standing at the foot of a cliff.

Grif: Aw, crap, I don't think we're gonna be able to get around this way.

Simmons: Tell me again, uh, why did we get out of the jeep?

Sheila rolls up right behind them.

Grif: Well, I guess it was this or sit there and watch you shoot rocks all day long.

Sheila's turret looks at Grif, then at Simmons as they speak.

Simmons: Well, at least that was fun.

Grif and Simmons turn simultaneously to see the tank.

Grif: Holy CRAP. What in God's name is that thing?

Cut to Church and Tucker looking at the vacant Warthog.

Church: Tucker, don't be stupid. They're just trying to draw us out.

Tucker: No they're not, look - they left the jeep. They're gone.

Church: Well, I don't know about this. It seems pretty fishy, but... alright screw it, let's go get it.

Cut to Sheila's HUD. Her cross hair slowly homes in on Grif's head.

Grif: Dude, hold still. I don't think it sees us.

(From an earlier version of the episode.)

Narrator: Coming up on Red vs. Blue: You've watched them for seven episodes. But next week, the unthinkable! Someone. Will. Die! 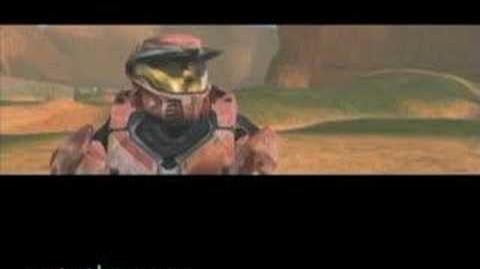 Check Out The Treads on That Tank
Original 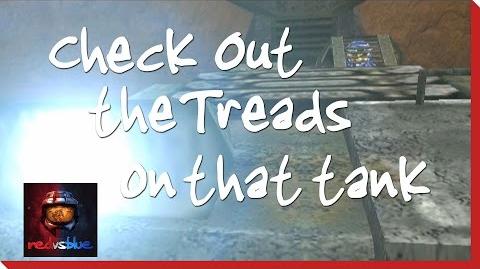 Check out the Treads on That Tank - Episode 7 - Red vs. Blue Season 1
Remastered
Add a photo to this gallery
Retrieved from "https://rvb.fandom.com/wiki/Check_Out_the_Treads_on_That_Tank?oldid=137031"
Community content is available under CC-BY-SA unless otherwise noted.