Catching Up is the fourth chapter of Recreation and the 138th episode overall.

The chapter begins with a flashback of Donut talking to the Counselor of Project Freelancer. The Counselor asks Donut about his tour at Blood Gulch. It then returns to present day at Blue Base, where Donut tells Caboose that Tucker was at a desert, and he started a distress call for someone to deliver to Church. He also states that something else was there, but it is unknown what is was.

Caboose then explains what the canister containing Epsilon was. He then reveals that he is trying to use Tex's old body, Epsilon, and Sheila to make a new friend. He then calls Washington for help. Washington is revealed at the end of the episode to be at the UNSC Maximum Security Detention Facility. He then demands to speak to the Commander, claiming to have found "the missing piece to his puzzle".

Fade in to the Counselor debriefing Donut.

Counselor: Private Donut, we want to debrief you now that your tour at Blood Gulch is over.

Counselor: I'm just going to ask you some... standard questions to rate your experience, and I will be filling out a form based on your responses. Do you understand?

Counselor: All right, then let's begin. During your employment, you were assigned to the Red Team. Is that correct?

Donut: That's right! You can tell by my lightish-red armor.

Counselor: Let's come back to this during the free-form period.

Counselor: Now, as to your experience in Blood Gulch, would you say it was...

Words list on the screen as the Counselor says them.

Donut: I would say... satisfactory.

Counselor: All right. Now I want you to look at this picture.

A picture in the corner of the screen enlarges.

Donut: Oh hey, I know where that is.

Counselor: Which of the following best describes this picture? Would you say it is, A: the new location where your team was assigned; B: the source of a mysterious energy reader; or, C—

Donut: That's just where we landed.

Counselor: ...Where you landed. Can you elaborate?

Donut: Yeah. We were diffusing a bomb by this guy “Omega,” but then the bomb went off, and it was just this huge explosion that it totally threw us into the future, and we landed there in that place.

Counselor: I'm not sure I understand... The future?

Donut: Sarge said that since we were surrounded by ice when the bomb went off, and then it was all sand, the Ice Age must’ve ended, and that would’ve taken a really long time. So, it must’ve pushed us into the future.

Counselor: I... don't have a check box for that. So I'm just going to write down “other…”

Counselor: Well, I suppose there's no reason to ask the rest of our questions. Thank you for a very... enlightening interview.

Cuts back to Blue Base, where Donut, now standing up, is speaking to Caboose.

Donut: So then, after that, they transferred me to that new base. I guess we left before we were supposed to do what they wanted us to.

Donut: But when I got there, all I found was the distress beacon from Tucker.

Scene cuts to a flashback with Donut approaching the said beacon. A silhouette dashes across the area and Donut looks around for it.

Donut (current): It said to get Church. I think Tucker was captured. There was something there.

Cuts back to present time.

Donut: Yeah... (looks at the Epsilon unit beside him, which is making some noise) Hey, this thing sure makes a racket.

Caboose: Who, Epsilon? Yeah, it does that when you talk to it. It loves when people tell it stories. Especially about things that have happened to us, and... and people we've met.

Donut: You've been telling it stories?

Caboose: Yeah, you know, to the best of my memory.

Donut: The best of your memory?

Donut: I bet those were some pretty weird stories. So, what is it?

Caboose: Oh, it's a memory component from a bigger A.I. that a bunch of scientists wanted to copy to make more, but they couldn't. So they drove it crazy until it developed this split personality, and then they harvested all the different personalities for their experiments. Yeah.

Caboose: I'm using it, part of Tex's body, parts of Sheila, to make a new super best friend. ...But it's not going so well. ...I lit myself on fire.

Donut: Where did you get it?

Donut: Well... could the person who helped you help us now?

Guard: Washington! Got a call for you.

Washington: Call for me? Who even knows I'm here?

Guard: Tune in on your personal secure channel. They routed it to us. (Washington begins to leave.) You can take it in here if you want.

A phone is ringing and stops when Washington answers the call.

Washington: This is Agent—um... this is Washington. Who's there?

Washington: Oh, dear Lord. Caboose? How did you even find me?

Caboose: You are on my computer screen! I just looked at it!

Washington: No, I mean... never mind. What's going on, are you okay? I haven't heard anything about you.

Caboose: Oh yeah, I'm good. How about you?

Washington: All things considered, guess I should be glad to be alive.

Caboose: Yeah... did you get a big medal from beating Project Freelancer?

Washington: Yeah. Sure. I got a bunch more metal in my life now. How about you?

Caboose: They gave us shiny new bases! The Reds have their place, and I have my own place! It's kind of cool! I think I'm gonna get a drum set.

Washington: ...Yeah. Wait. Seriously? You have a new base?

Caboose: Well, it's not new new. They gave us the ones that were abandoned from Project Freelancer.

Washington: They gave you a base.

Caboose: What, you didn't get a new base too?

Caboose: Well, you can come here and share my base with me. Oh! We need your help! Can you come right away? Can you come help us?

Guard: (approaches Washington from behind) All right, Washington. Back in your cell.

Washington: Guard, I need to see the Commander. Now.

Guard: Yeah, right. Why the hell would I let you do that?

Washington: Because I think I just found the missing piece to his puzzle. 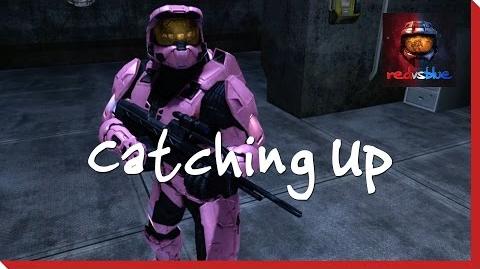 Retrieved from "https://rvb.fandom.com/wiki/Catching_Up?oldid=135530"
Community content is available under CC-BY-SA unless otherwise noted.