Aboard the Mother of Invention, Agent Maine is seen watching a Pelican land. Meanwhile, inside a room overviewing the briefing room, a lone female Freelancer agent in brown armor is seen moping. Washington walks behind her and tries to comfort her, stating that it wasn't her fault. However "Connie" feels that the Director is trying to separate the best Freelancers from the worst by using the leaderboard system and the missions. Wash, still trying to console her, says that's a lie. Connie then angrily tells Wash to stop calling her "Connie" as it sounds childish to her. She instead tells him to call her "C.T.". She then hands Wash her helmet to Wash and walks away. As she leaves, C.T. tells Wash to figure out what side he is on, as Wash looks down at her helmet.

In Blood Gulch, Tucker is on the beach teaching Church and Caboose about what to say in front of a woman. Church refuses to do it, but Tucker says he needs his help. Church then asks Tucker how he is qualified to even teach them about women, as he is never seen around one. Tucker retaliates saying he is qualified and begins his lesson by telling the two that the first step to getting a girl is being a rebel. He then says to let girls mold them into what they want them to be and tells Church and Caboose to roleplay, playing a man and woman respectively. Tucker then has Church hit on Caboose. When he tells Church to say something rebellious, Church says he drives a really fast car over the speed limit, which impresses Caboose.

Freelancer Case File 01.045//Level 2 Confidential [CEDOCUNET] Mission: Failure, All Objectives appears onscreen as Maine watches a Pelican land in the station's docking bay. Cut to a room with a Freelancer in brown armor hanging her head down as Washington approaches her.

Washington: It wasn't your fault, Connie.

Connie: Easy for you to say. You didn't drop the ball.

Washington: The ball got dropped. We were all there, it's everyone's responsibility.

Connie: Dammit, why are you doing that?

Washington: What am I doing?

Connie: Yeah? Great. Hey, how about you go make Carolina feel better? Go pat Maine on the head. See how that works out for you.

Washington: We all make mistakes.

Connie stands up and faces Wash.

Connie: That's the point! We don't all make mistakes. Some of us very specifically make mistakes, and others don't seem to make any mistakes at all!

Connie: That's why they're doing all this! These missions! The rankings! They're drawing a line between us Wash. And you're either on one side of that line, or you're on the other. And it's getting pretty goddamn clear which side I'm on.

Washington: No one thinks like that; we're a team.

Connie: I'm not talking about you guys. I mean them. Him.

Washington: The Director? He's given us everything. He's helping us!

Connie: Helping us? Wake up! Wake the fuck up! He's filtering us! This is a selection process, Wash. I don't know for what, but, if you're not at the top of that board, you're not worth anything to him.

Washington: You're just overreacting. You've always been hard on yourself, Connie.

Connie then turns away from Washington

Connie: And don't call me Connie. Makes me sound like a fucking kid. (Begins walking away) Call me CT. Oh, and that line that I talked about...?  You better hurry up and figure out what side you're on, Agent Washington, before they figure it out for you.

As Connie exits the room, Washington turns her helmet face up and looks down at it before looking up again.

Cut to Tucker, Church, and Caboose standing out by the water at Blood Gulch

Tucker: Alright, class is in session. Students, line up over here; teacher on this side.

Church: I'm not doing this.

Tucker: Dude, you've got a girl coming over. You don't know what to say to her. You need my help. And the first set of lessons is free.

Church: How are you qualified to teach us this stuff?

Tucker: Are you kidding me?

Church: No, no I'm not kidding. How are you qualified? You talk about girls all the time, I've never seen you with one.

Tucker: Um, I have lots of... just shut up and listen. Stay quiet and hold all your questions until the end. Now, before we start, does anyone have any questions?

Tucker: Ah ha! That was a trick question. You're supposed to hold all questions until the end.

Church: Oh yea? Why didn't you hold your trick question until the end then?

Tucker: The rules don't apply to me.

Caboose: Well then maybe my question was a...magic...question too.

Tucker: Yea, abracadabra. You're an idiot. So, we've already learned our first leason: the rules don't apply to you. Girls like a rebel, someone outside the law.

Tucker: It depends on the crime. Nothing with animals. See, they want someone with a free and independent spirit. Something that they can crush into a raw material that can then be molded into what they really want.

Caboose: What do they really want?

Tucker: They don't know. Which is why you have to tell them what they want without actually telling them what to do.

Caboose: Should I...should I be taking notes?

Tucker: Do you even know how to write?

Caboose: Is that another trick question? Can I answer it at the end?

Tucker: Okay, then let's do some role playing. I'll give you critiques on your approach.

Church: You want Caboose to be the woman?

Tucker: Dude, it's a lot bigger stretch for you to play a man. Trust me.

Caboose: Um, okay. What should I say?

Tucker: Just say whatever a girl would say.

Caboose: Uh, okay. Um, I uh just really want to meet someone nice. Um you know, someone who appreciates me for who I am. Not so much because I'm pretty but because they really want to get to know me because they want to find out what my interests are. Then we can spend time exploring the world and sharing all the wonderful things in life that make it wonderful.

Both Church and Tucker pause for a few second and stare at Caboose.

Tucker: What!? Do you know girls at all? Talk about how much you like shoes.

Caboose: I've been preparing for this role my whole life.

Tucker: Shut up. Okay, Church your girlfriend just got to base. You see her and you say...

Tucker: There you go. That's it. That's a girl. Okay Church, hit it. Action!

Church: Uh uh hey uh what are you doing? What's up? Uh uh, what's up with what you're doing?

Caboose: Okay, um, yes I was just sitting here thinking about shoes and celebrities that only have first names.

Caboose: Actually if you want the truth I feel like I have to say these things to make myself more appealing when I really think that I should jus-

Church: Uh okay I think the working class should uprise against the rich people.

Tucker: I said rebellious not revolutionary.

Church: Oh okay. I drive a fast car over the speed limit. All the time.

Caboose: I will go with you anywhere. 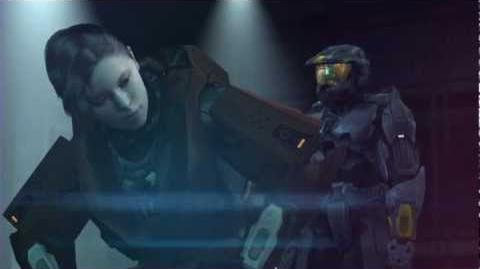 Retrieved from "https://rvb.fandom.com/wiki/Case_File_01.045?oldid=143048"
Community content is available under CC-BY-SA unless otherwise noted.