Captive Audience is the ninth episode of Red vs. Blue: Season 9 and the 182nd episode overall.

The episode begins at Red Base with another earthquake. As Lopez questions the occurrence, the other Reds, except Simmons, mistake it as jokes. Simmons tries to convince them that Lopez isn't that funny but ends up getting into an argument with Grif and Donut. Unable to get help from anyone, Lopez takes matters into his own hands, while Simmons decides to show his team that he is likeable, too.

Meanwhile, at Blue Base, Epsilon still tries to explain the world around them to his teammates, even telling them about Alpha and the Director. However, the more he explains, the more confused his teammates get. Tucker actually concludes Epsilon is a creepy stalker. Things get worse when the three soldiers spot a grenade between them. As the three question who the grenade belongs to, the grenade explodes.

On board the Mother of Invention, North Dakota catches Washington walking by. North asks Wash about his recent meeting with internals, but Wash says he's unable to talk about it. As North tries to persuade him to talk, he brings up the fact that he is still getting heat about using his Domed Energy Shield in Evacuation Plan, which catches Wash's attention. The conversation suddenly becomes reversed, when Wash asks about what happened on the mission and North is unable to talk about it. Wash reminds North about what happened to Agent Utah and says North is lucky he wasn't killed. The two get back to talking about internals when suddenly a group of soldiers are seen quickly passing by them. When Wash is bumped by one of the soldiers, he asks what's going on. The soldier tells them about a 3 to 1 battle, involving a new agent. Wash and North enthusiastically go to check it out. In the battle, agents York, Maine, and Wyoming are all knocked back by the new, black armored agent.

Simmons, Grif, and Donut are seen standing on Red Base while Lopez and Sarge stand on the ground as an earthquake happens

Sarge: Good point, Lopez. I don't understand what you said, but you presented it in such a confident manner that it must be right.

Grif: Man, that new robot really seems to be fitting in around here.

Donut: Yeah, even though no one understands him, people seem to really want to get past the rough robotic exterior and get to know the inner Lopez.

Simmons: Sooo happy for him.

Donut: Me too. Wait. Was that sarcastic?

Grif: Yeah, dude. I have to admit, that was off the charts even for my sarcastic meter.

Sarge: Hahaha! Oh, good one Lopez! Man, you are a riot.

Lopez: No, usted no me entiende.[No, you don't understand me.]

Grif: Ha ha! Man, all that and the guy's a comedian. God, I wish my sidekick could be funny like that. What's your problem, Simmons?

Simmons: What? You don't even know what he said! How could it be funny?

Grif: Whatever. I guess you just had to be there.

Simmons: I was right here!

Sarge: All right, nice chatting with you, Lopez. Now, enough jokes. Get back to work polishing stuff. The stuff's not going to polish itself, you know?

Lopez: Todo el mundo aquí está en peligro. Tienes que escucharme.[Everyone here is in danger. You need to listen to me.] (Walks torwards the base)

Sarge: Haha! Well, okay, one last joke. But, that was it. Now seriously, back to work.

Donut: Hahaha! I just got that one, too. Boy, he really makes you think.

Grif: It's like he's saying what we're all thinking, but in Spanish.

Simmons: You guys are idiots. I'll show you who's likable and funny. And who people like. (Walks away)

Cut to outside of Blue Base with Church, Tucker and Caboose

Church: Okay, okay. It's like when a computer tries to solve a problem. Do you know what recursion is?

Caboose: Yeah, I love that movie.

Church: No, no, it's like-It's like a thing where a computer tries a number of different iterations to solve a problem then when it gets to the end it returns all those solutions back up the line to the first iteration and then it has its solution. Does that make sense?

Tucker: You're saying you're a computer.

Church: No, no, no, no. Actually-well, actually, yes. Yeah, sort of. I'm actually-I am a computer-kind of. I'm a computer program.

Tucker: But your foot was bleeding.

Caboose: And your breath kind of stinks. You know, I-I wasn't going to say anything before, but since we're all telling the truth about each other-

Tucker: Caboose, you're an idiot.

Caboose: Well, I didn't realize how much words could hurt until it was my turn. I don't think I want to play this honesty game anymore.

Church: I-I'm a real person in here because this is all constructed by memories of the person that I'm based on. Same as me. I'm all the memories of that guy.

Tucker: Who is that?

Tucker: Well, I can see you're continuing a grand tradition.

Tucker: It's quite a lineage.

Caboose: I grew up on a moon.

Church and Tucker: (In unison) Nobody cares!

Caboose: You're all just jealous.

Tucker: And this girl who's coming is that original guy's girlfriend?

Tucker: I thought you were that guy's memory!

Church: No, I'm the other guy's memory: the middle one.

Caboose: Did he have a girlfriend?

Tucker: Dude, I don't know how any of you got any girlfriends, spouting all this sci-fi bullshit. You guys ever talk about football for God's sake?

Caboose: Uh-huh. And then what happens?

Church: I don't know! We-we do whatever people do when they fall in love.

Caboose: I'm asking you a specific question. You should give me a specific answer.

Church: Are you taking notes?

Church: My job is to solve this problem or pass it along. That's it.

Tucker: So, you follow this girl down through the levels of the memory iterations and you basically try to figure out how to make things work. Even though she doesn't like you?

Church: She likes me. She's just, you know-

Caboose: Yeah, that was an easy guess. You know, 'cause all girls are pretty much mean.

Tucker: Can I just say, this might be the creepiest stalker scenario I've ever heard. And I've made a few myself.

Tucker: You chase a dead girl through a memory and every time she escapes you, you either follow her down to the next set of memories or resurrect her in some way. Only to do it all over again!

Tucker: You know what the difference between stalking and romance is? Romance happens in movies. In real life, it's called stalking.

Caboose: Well, maybe all of this is happening inside of a movie! (A hissing sound starts and a grenade is shown to be in between the trio)

Tucker: Psh. Oh, please. Who the fuck would watch that movie? All we ever do is stand around and talk. Hey, you dropped a grenade.

Church: That's not mine. Caboose, pick that up.

Caboose: I'm not allowed to carry grenades, remember? Because of that one exploding time? Which was no one's fault.

Church: Well, I didn't drop it. Tucker, count yours.

Tucker: I have a read-out on my helmet, dummy. I don't need to count.

Church: Oh, right. Well, it has to be somebody's.

Tucker: (Short pause) Fuck. Somebody threw a grenade at us, didn't they?

Church: Yeah, we probably should have figured that out sooner, right?

Grenade explodes as the Blues scream

North Dakota: Hey, Wash! Wait up! Listen, I heard you had a meeting with Internals.

Washington: Oh, you did?

North Dakota: Yeah, do you mind if I ask what it was about?

Washington: Not really supposed to talk about that.

North Dakota: Help me out here. I'm still getting heat about using equipment in the field.

Washington: You did? Really? Without a pipeline back to the command server?

North Dakota: I had to improvise. We had a problem.

Washington: Let me guess, are you related to the problem?

North Dakota: Okay, now I don't want to talk about it.

Washington: Equipment in the field...don't forget what happened to Utah during training, you're lucky it didn't kill you.

North Dakota: If I was lucky I wouldn't have needed to use it at all.

Washington: Well, you can relax. Internals didn't ask about you. (Soldiers start running past Washington) It was something else. Lots of questions about the Insurrection and transmissions coming out of our-(One soldier bumps into Washington's shoulder)

Washington: Hey, what's going on? Soldier, where is everyone running?

Soldier: (Pointing down the hall) New agent squaring off against Maine, Wyoming, and York on the training room floor. We're going to watch! Hey guys, wait up! (Leaves)

North Dakota: Three on one?

Washington: I gotta see this.

North Dakota: Yeah, right behind you. (Both agents follow the soldier)

Cut to a training room as Maine, Wyoming and York run towards the agent with staffs

Maine, Wyoming and York are knocked down to the ground by the agent's staff, revealing the agent to be none other than Tex. 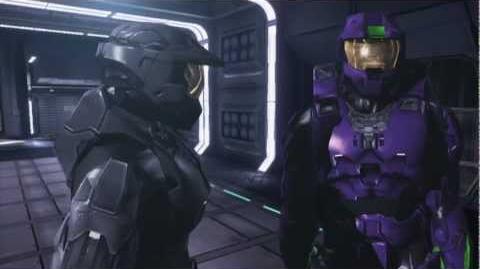 Retrieved from "https://rvb.fandom.com/wiki/Captive_Audience?oldid=135525"
Community content is available under CC-BY-SA unless otherwise noted.