Called Up is the thirteenth chapter of Recreation and the 147th episode overall.

The episode begins with the Chairman of the Oversight Sub-Committee listing the reasons that Washington is in prison and is incredulous about his offer to provide help. However, when Wash reveals the fact he knows where Epsilon is, the Chairman changes his mind and is willing to give Wash whatever he needs to retrieve Epsilon in exchange for a clean slate. Back in Valhalla, Simmons is seen running away from the Meta, who is chasing him with his Brute Shot.

In the desert, Tucker, the Reds, and Caboose take cover in the Temple and begins explaining the situation. Tucker is disappointed in the fact that his "rescue" party consists of two Reds and Caboose. It turns out that the temple houses an artifact, built by an ancient civilization, which happens to be a super weapon. He explains that C.T. and the others came there and killed the dig site team and were trying to steal the weapon to sell it to the highest bidder. He then tells them that they can not leave the area. Either they destroy the weapon or kill C.T. and his men.

Washington: I'm sorry, but do we know each other?

Chairman: You are special Agent Washington, former member of Project Freelancer, also known by the designation, Recovery One.

Washington: Also known as Prisoner 619-B.

Washington: And you are...?

Chairman: I am someone extremely disappointed by destruction of the said property. That, is all you need to know.

Washington: I want to make a deal. I have information that you want.

Chairman: All the information that I want, was lost in the destruction of Project Freelancer.

Washington: Not all of it.

Chairman: Agent Washington, if you knew anything, that could have kept you out of prison, I am sure it would have come to light during your trial. So if you're quite through with wasting my time, will—

Washington: I know you're missing the Epsilon unit, and I know where to find it.

Chairman: ... You have my attention.

Washington: It disappeared after the events of Freelancer Command. You searched everyone associated with the program. Even the Red Team Troopers you found.

Chairman: Yes? The ones who were found bickering around the stalled jeep.

Washington: There's another group of soldiers, a Blue squad. They escaped with Epsilon.

Chairman: I show no record of these soldiers.

Washington: And you won't, but I know where to find them. So here's the deal: I give you that missing module, you get me out of here. I get a clear slate, and we forget we ever knew each other.

Washington: I'm gonna need some equipment. Invisibility, overshields, anything left over from Freelancer.

Chairman: I think we can point you in the right direction here.

Cuts to Valhalla; Simmons is screaming, jumping, as his busted motorcycle flies to the side. When he lands, he runs off in the same direction his motorcycle landed. The Meta is chasing after him, shooting at him with his brute shot.

Cuts to Sandtrap. Sarge, Grif, and Caboose are beside the temple’s entrance, shooting at whoever is approaching them. Caboose backs inside the temple and Tucker runs in.

Tucker: Guys, hold them off! I'll get the door!

Grif and Sarge move inside as well. The door closes.

Tucker: You brought these guys? Are we killin’ each other today? Or pretending to work together?

Sarge: We got that radio call you sent.

Tucker: The distress signal? And they sent you assholes? That was to help me! I wanted less distress, not more distress.

Grif: Uh, actually we kind of ignored that call at first.

Grif: Then Donut showed up and told us you were in trouble.

Tucker: Ohh, I get it. So me making an emergency radio call, not a big deal. Donut telling you some dumb homo story, red alert!

Tucker: So where's everyone else?

Caboose: What do you mean?

Tucker: The rest of the people who are gonna help me fight these fuckers off.

Tucker: You didn't bring any other soldiers, did you.

Caboose: Oh, um, that depends. Um, by other soldiers, d’you mean people... other than us?

Tucker: Uh, it's kind of hard to explain. They think there's some kind of artifact here. Some massive weapon built a long time ago.

Tucker: No, not a spear. Like some kind of super energy electric thing.

Tucker: It's not a spear, dumbass!

Sarge: Hm. Think I’ve read about these. They found some back during the war.

Tucker: Yeah, well, all the aliens are into them and so are all the humans now. So, me and Junior have to go around sometimes and help... negotiate stuff. You know. Smooth talk.

Tucker: We’re like the ambassadors here or something. Humans and aliens seem more comfortable with us, since we’re kind of... you know, in between.

Caboose: In between aliens and humans, huh. You mean in between two alien and human? ...Ladies?

Tucker: Come on, dude. Seriously? You're not gonna get me to say it with that lame-ass joke. I'm not that easy.

Caboose: Ahaha. Yeah, I hope one day you will tell me what you're going to do between the two ladies.

Sarge: So are you part of the group that C.T. told us about?

Tucker: That asshole? He's a fucking liar. He and his team killed the guys originally sent to dig this thing up, then they tried to kill me.

Caboose: Oh no, well I hope you stop them.

Tucker: I locked myself in this temple. I figured it would keep me safe and keep them away from the relic.

Grif: So who are they?

Tucker: I don't have any idea, dude. They're probably trying to steal the artifact, then sell it to the highest bidder.

Tucker: You're an idiot. Look guys, thanks for the fucked up rescue mission and all that, but where's Church?

Tucker: Yeah, I know that. Church has been dead for years, it never stopped him before.

Caboose: Oh yeah, we also found out that he's, not a ghost, and that he's an A.I. computer program, like Sheila.

Tucker: Yeah, you guys didn't? [quickly] Ha, pay fuckin' attention, what the fuck are you guys paying attention to?

Grif: Oh, uh, I have my suspicions.

Sarge: Of course, I just didn't want to tell anybody.

Caboose: I still want to know what Tucker's going to do between the two ladies.

Tucker: Look guys, I need your help. We either need to chase these guys off or destroy this facility. Or pick up some chicks. Old habits die hard.

Sarge: But why destroy it?

Tucker: Orders. We can't let it fall into anyone else's hands. Plus, breaking stuff is fucking awesome.

Grif: This thing is that powerful?

Tucker: Hell yeah! First they built these rings that were a huge weapon, then we found this super powerful cube-shaped weapon, and I guess this is the pyramid version.

Grif: That ancient race sure built a lot of weapons.

Grif: I mean did they really need to spend all their time building stuff to destroy the universe? Like, how about the galaxy's biggest movie theater or, like some kind of super advanced water park? All work and no play guys, seriously.

Tucker: No play. Tell me about it. 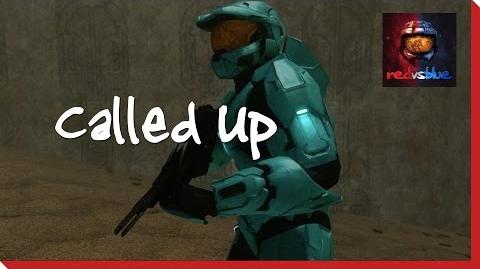 Retrieved from "https://rvb.fandom.com/wiki/Called_Up?oldid=139663"
Community content is available under CC-BY-SA unless otherwise noted.