In the present, Washington and Carolina approach the location of C.T.'s helmet, wondering how it ended up there. Carolina then tells Wash what happened back at the Longshore Shipyards.

In the past, C.T. and the Insurrectionist Leader plan to escape the facility, but C.T. tries to tell him that she may be able to reason with the Freelancers by explaining the whole story from their point of view. Outside the room, Carolina and Tex wait at the door, as the room is guarded by turrets making it impossible for them to get in without them activating. Carolina orders York to disable the power, but the latter is pinned down by the Twin Insurrectionist Chain Gunners. Wyoming proposes that Florida help them as the latter recovers from his injury and uses his grenade-launcher to manipulate a crane to smash into the twins, killing them.

With the power finally disabled, C.T. begs for the Insurrectionist Leader to hurry so they can leave. However, the Leader refuses, not wanting to leave his team. As the two begin to argue, Tex and Carolina rush into the room and hold C.T. and the Leader at gunpoint. C.T. attempts to convince them of the Director's crimes, but the two will have none of it. C.T. then reveals that she knows what Tex really is, and calls her a shadow, enraging her enough to shoot at C.T. With negotiations over, the four ensue in a prolonged fight before Tex fatally wounds C.T. with two of the Leader's tomahawks.

The Leader drags C.T. out of the room as Carolina berates Tex for harming a teammate, but Tex tells her C.T. is no longer one of them. The Leader drags C.T. into an escape pod and she gives him a data card full of information describing the Director's crimes before finally dying. In grief, the Leader takes her helmet and puts it on, revealing that the C.T. the Reds and Blues previously encountered at the desert was actually the Leader all along.

Back in the present, Washington is surprised at the truth as Carolina retrieves what she was looking for; the data card holding the important information.

Washington and Carolina are seen running across the desert

Washington: Here. I have no idea how she got here.

Carolina: That's because she didn't.

Washington: Is that who I think it is? If what you're saying is true, how could this have happened?

Close up on C.T.'s helmet. The desert around it fades away to C.T. in the past, shown with the Insurrectionist Leader in a room at the enemy complex.

ENEMY COMMAND COMPLEX. MANY YEARS AGO...

C.T.: We need to get to the escape vehicle.

Insurrectionist Leader: I'm not leaving them!

The Insurrection Leader summons out two turrets from the ceiling by using a computer.

C.T.: You don't understand. They want me! They don't care about the rest of you. I know too much. If I leave, they'll follow me.

Outside of the room, Carolina is seen joining Tex ouside the door.

Tex: Quiet, that room is guarded by turrets.

Carolina: I can get past them.

Tex: If there was a way to do it, I would have already done it.

Carolina turns on her radio.

Carolina: York, I need you to cut the power on the main complex.

Cuts to the Twin Insurrectionist Chain Gunners, firing at the Freelancer agents. Pan up to York and Washington.

Cuts back to Carolina and Tex.

Carolina: Just do it.

Cuts back to York, Wash, and Wyoming.

Washington: Sounds like a good excuse to get out of this firefight.

Florida pulls himself up.

Wyoming: Good show, mate! That's the spirit. Still have a bit of fight in you.

Florida pulls off the tomahawk from his shoulder and tosses it at the Twin Insurrectionist Chain Gunners. It hits the ground and skids to a stop a few feet away from them. The Twin Chain Gunners share a glance before continuing to fire.

York: Ha, so much for that plan.

Florida takes cover and spots a crane off to the side. He fires his grenade launcher at the crane arm which knocks a crate out of its grasp. The crate slides across the ground and knocks the Twin Insurrectionist Chain Gunners off their platofrm and onto the ground where the crate messily crushes them.

Cuts to Carolina and Tex.

York: (over radio) We're all clear Carolina. We'll be dark in less than sixty.

Carolina stands up and turns off her radio,

Tex: Carolina, I know what the fucking objective is!

Inside the command complex, the Insurrectionist Leader still works on the computer. The lights go out.

Insurrectionist Leader: I already told you, I can't leave them!

The Insurrectionist Leader pulls out a tomahawk.

C.T.: Most of them are already dead! Besides if we leave they have no reason to be here!

C.T. pulls a data pad out of the computer.

C.T.: Please, let's just go while we still can!

C.T. grabs the Insurrectionist Leader by the hand and turns him towards her.

C.T.: You promised me. You said we would be together. I have all the information we need, I have my armor. We can take this to the right people and they'll...

The doors to the room open and Carolina and Tex enter.

Carolina: Actually, you don't have any time.

York: (over radio) Hey Carolina, the power is off.

York: (over radio) What, no "thank you"? This was a complicated-

Delta: (over radio) Actually, I did most of the work Agent York.

Tex: C.T., you have something that belongs to project Freelancer, and you know how the Director hates to share.

C.T.: You two are fools. The Director is playing you. Don't you see it?!

Carolina: C.T. stop it! We know you've been feeding intel to the resistance for months!

Insurrectionist Leader: Ha, ha, is that who he told you we are?

C.T.: They aren't the enemy Carolina. We're the ones working outside the rules, not them. You don't know what the Director has done. He's broken major laws. When this war ends, we're all going to have to pay for his crimes! Maybe some of us are already paying for them.

Tex: What did you just call me?!

Carolina: You're coming with us, C.T. This is your last chance.

Tex: Actually, we don't need you. We just need your armor.

The shot C.T. turns out to be a hologram and the real C.T. rushes forward, tackles Tex, and takes out her knife and pins Tex's right hand to her back. C.T. then pushes Tex forward into the Insurrectionist Leader who strikes her with his tomahawk. Carolina ducks behind a crate as the Insurrectionist Leader tosses some tomahawks towards her. She fires back at him. C.T. attacks her with a knife and Carolina fires, hitting a fake C.T. and dodging the real C.T.'s attacks. C.T. disarms Carolina and Carolina pulls out an electric baton and hits C.T. with it.

Carolina is attacked by a hologram C.T. which she defeats and the real one appears as the Insurrectionist leader charges her. Carolina kicks the Insurrectionist Leader over to Tex who punches him in the face, knocking him across the floor. C.T. and Carolina continue to fight. C.T. loses grip of her knife but grabs it again in the other hand and continues her attack. Carolina flips and disarms C.T. Tex charges at C.T. with a tomahawk and misses. C.T. summons a holographic projection. Tex grabs a second tomahawk and defeats the hologram C.T. before shoving the two tomahawks into C.T.'s abdomen and shoulder. The Insurrectionist Leader begins to get up as C.T. falls to the ground. Carolina grabs Tex by the shoulder.

Carolina: What the hell are you doing?!

Tex shakes her off.

Carolina: By killing a teammate?!

Tex: She's not a teammate. She's a traitor.

The two hear a door open. They turn to see the Insurrectionist Leader supporting C.T. into an escape vehicle. He then closes the door behind.

Tex: Damn it! That's on you! I guess you can explain how we lost a whole suit of armor and failed to capture the leader of the resistance!

Tex turns on her radio.

Four Seven Niner: (over radio) I've got them command. Read you loud and clear Texas. Clear me an L.Z. and get ready for pickup.

Carolina: I don't know what's gotten into you Texas, but you better figure out the difference between your enemies and your friends.

Carolina follows. Cut to the Insurrectionist Leader and C.T. moving inside the escape vehicle.

C.T. falls to the floor.

She lies down at the back of the ship, wincing in pain. The Insurrectionist Leader removes his helmet.

C.T.: Here, take the info. It's not complete but it'll get them started.

C.T. hands the data pad over to the Insurrectionist Leader.

The scene fades back to C.T.'s helmet at the desert in present time.

Washington: So that's what happened to her armor.

Carolina: Apparently. We never did complete our objective.

Washington: But why come out here? What's the motivation?

Close up on Carolina's hand as she picks up the data pad that was given to the Insurrectionist Leader right before C.T. died.

Carolina: I have a feeling this'll tell us. 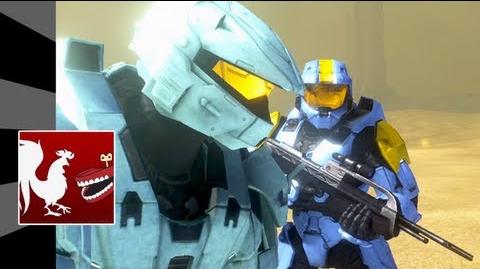 Retrieved from "https://rvb.fandom.com/wiki/C.T._(Episode)?oldid=146949"
Community content is available under CC-BY-SA unless otherwise noted.