Red vs. Blue Wiki
Register
Don't have an account?
Sign In
Advertisement
in: Characters, Blue Team, Simulation Trooper,
and 3 more

"There's nothing, more important to me, than the safety, and well-being, of my men. Or my name, isn't Captain Butch Flowers."
—Captain Flowers in Silver Linings

Captain Butch Flowers, also known as Freelancer Agent Florida, was the Blue Team's previous commanding officer at Blood Gulch. Despite Flowers' few appearances, his roles in The Blood Gulch Chronicles, the Project Freelancer Saga, and Season 14 have had a significant impact to the series. He is also the main antagonist of the prequel episodes in Season 14.

Flowers is present during a briefing in Planning the Heist, but isn't assigned to a team. He is then present on the Pelican that picks up Carolina, after the battle with Insurrectionists on the highway in order to retrieve a briefcase. Flowers returns in Oversight, spying on C.T. and other Insurrectionist soldiers with Freelancer Wyoming. Later, he and Wyoming attempt to ambush the Insurrectionist Leader and C.T. when they retreat into a bunker. But, before the two can initiate their attack, Florida is spotted by the Leader and is struck from afar by his thrown, collapsible tomahawk. After being struck, the other Freelancers arrive.

Flowers survives the injury and pulls the embedded tomahawk out of his shoulder, with Wyoming remarking; "Good show, mate! That's the spirit. Still have a bit of fight in you." Flowers then proceeds to throw the tomahawk at the Chain Guy and Chain Girl but falls short. After taking cover from the incoming fire, he then proceeds to shoot the crane's arm in the complex using an under barrel grenade launcher. As a result, the crane collapses, causing its cargo to knock the two chain gunners off of the platform and crush them.

Later on, following a break-in initiated by Freelancer Texas, the Director decides to move the Alpha A.I. to a location where nobody would find him and suggests someone whom they could trust to guard him. The Counselor recommends Flowers as the prime candidate, in which Director corrects him by stating "You mean Agent Florida?" Flowers then walks into the room and happily accepts the responsibility. The Director then states that they need a way to explain Agent Florida's disappearance, in which Counselor replies that he already has it handled. In order to cover Flowers' tracks, the Director and Counselor erase all records of Florida (as well as sink the entire state of Florida to the bottom of the ocean) and prepare to send him to a secluded box canyon with Alpha.

In order to ensure the Alpha's safety, Flowers oversees a Red army boot camp and recruits three candidates that he believes will be perfect to act as the Blood Gulch Red Team: Privates Simmons and Grif and their C.O. Sarge. Flowers also recruits Private Tucker as the third member of the Blood Gulch Blue Team. For the final step, Flowers forcibly implants the Alpha into Private Jimmy, giving Alpha full control over Jimmy's body and believing it to be his own. Flowers then greets Alpha, now calling himself Church, and introduces him to Tucker. With both teams set for a never-ending conflict, Flowers relays his progress to the Director and speaks with V.I.C., a secret computer residing under the canyon.

Vic informs Flowers to make sure that the Alpha has no recollection who his true identity or the events of Project Freelancer and shows him the backup Freelancers to take his place if he shall die. Confident that nothing will go wrong, Flowers leaves but trips over a plug connected to Vic's computer. This, unfortunately, swaps the names of the Freelancers with Simulation Troopers and changes Vic's personality.

While at Blood Gulch, Flowers plans to lead a Blue offensive to destroy the Red Team and knows the key to the Blues' victory. Unfortunately, Flowers soon dies from what Church and Tucker assumed was a heart attack in his sleep, possibly caused by an allergic reaction to aspirin. Upon finding his dead body, Tucker takes Captain Flowers' armor for himself.

In The Wrong Crowd, it is revealed that Flowers was revived by and allied with the Green Alien and O'Malley, where the latter inhabited him. Upon meeting Doc, Sister, and Junior in the underground caves, Flowers is seen wearing the standard blue armor - most likely Tucker's old armor — and speaks under the influence of Omega. In Why Were We Here?, O'Malley leaves Flowers unconscious. After Doc heals him, returns to the surface and reunites with Tucker to explain the situation. He announces that he has information that could win them the war, but dramatically pauses before he reveals the information and is sniped by, what is later revealed to be, a future version of Tucker by accident, when he forgets the safety is off. After the time-traveling escapades were undone, it is unknown if this is still the origin of the bullet that killed Flowers.

When he first appeared in the series, Flowers was down to earth, treated the Blues with kindness, and was protective of them, making him a complete opposite to Sarge. He's shown to be very positive most of the time and strangely speaks about the Reds as if they were kids as he calls them "old rascals". He also seems to have much humility as he doesn't mind being called by his name without his rank.

As Agent Florida, Flowers rarely spoke and followed every order he was given, making him seem very professional about his job. Flowers seems to have much trust from others, as the Counselor and Director gave him the duty to protect Alpha at Blood Gulch. He also seemed to have a darker side as he barely showed any concern for the soldiers that he was going to pick for leader of the Red Team in Blood Gulch, allowing Sarge to kill Lemons despite his plea for help, and how he implanted Church into Jimmy so he could be possessed by him.

Florida and Wyoming seem to work well together. The two are shown spying on the Insurrection and C.T. in Oversight, where Florida seems to act as a sidekick to Wyoming. The latter later compliments Florida on his strength after he gets back up from a strike from a tomahawk in the shoulder. Florida seems to be one of the only characters who isn't annoyed by Wyoming, maybe even appreciating his company.

In Silver Linings, Tucker is shown to like Flowers. However, after Flower's (first) death, Tucker takes his armor for his own. In Why Were We Here? Tucker briefly speaks to Flowers before he dies a second time, after which Tucker states that he was still going to keep his armor. Responsible for Tucker ending up in Blood Gulch, Flowers seemed to enjoy Tucker's company, even once stating that the latter has "metrosexual good looks".

Church seemed to like Captain Flowers, at least a little, as he displayed respect for him as a Captain and tried to save him when he believed he went back in time (though he accidentally ended up killing him). He did find some of the Captain's comments awkward, though. Unbeknownst to Church, however, Flowers was actually meant to keep the Reds and Blues involved in a never-ending conflict, in order to ensure Church's safety, due to the fact that he was the Alpha AI. Flowers also made sure that Church never knew his true origins or the Meta, under orders from the Director. Despite this, Flowers seems to genuinely like Church and has befriended him.

Flowers was Vic's partner in the mission to keep Church safe in Blood Gulch. He is also responsible for V.I.C's eccentric personality after disconnecting a wire from V.I.C.'s main computer.

While the two have never met Flowers is responsible for Caboose ending up in Blood Gulch after corrupting Vic's list. From what the others told him, Caboose seems to like Flowers more than Tucker as he mentions him to Epsilon and not Tucker.

While the two have never met Flowers is responsible for Donut ending up in Blood Gulch after corrupting Vic's list.

Flowers is responsible for Sister ending up in Blood Gulch after corrupting Vic's list. Unlike Donut and Caboose, Sister was aware that she was sent to replace Flowers. The two briefly met after Flowers was revived by the Green Alien. Sister then tried to convince Doc to help Flowers after Omega fled his mind.

While the two are never seen interacting Doc presumably helped Flowers after Omega left his mind.

While it is unknown if Flowers met Simmons he personally selected Simmons to be on the red team in Blood Gulch.

While it is unknown if Flowers met Sarge he personally selected Sarge to be the leader of the red team in Blood Gulch despite witnessing him cause the deaths of several of his comrades and his superior Lemons under the assumption he was a blue.

The Director seemed to trust Flowers enough to let him guard the Alpha and orchestrate the Blood Gulch simulation. This is later revealed to be a mistake as Flowers corrupted Vic's list and personality, assembled the team that would eventually take down Project Freelancer, and got himself killed twice. Despite this, Flowers highly respected the Director, being one of the few Freelancers who did not go rogue.

While the two are never seen interacting with each other the Green Alien brought Flowers back to life.

Though he has only been shown in combat on rare occasions, Florida seems to be a very formidable opponent. While he may lack the same strength as the other Freelancers, he is a very smart fighter, using his surroundings to his advantage. An example of this is first shown in C.T. when he, York, Washington, and Wyoming were all pinned down by the rapid gunfire of the Twin Insurrectionist Chain Gunners, with seemingly no way out.

Though he was not strong enough to strike the gunners with a tomahawk, the throw bought him enough time to take cover. He quickly discovers a way to take the upper hand in the situation by malfunctioning a nearby crane and causing the box it was holding to crush the Chain Gunners to death. Florida also seems to have the trust of the Counselor to protect the Alpha and the Director showed no doubt in his decision.

Before he was sent to Blood Gulch, Agent Florida killed Chain Guy and Chain Girl. 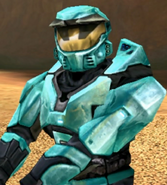 Flowers as he appears in Season 3.

Flowers as he appears in Season 5.

Florida's armor as a Freelancer.