Several years before the events of Season 15, the Desert Gulch Reds, led by Surge, take control of the Desert Gulch Blues' base but come under heavy fire by the Blues. Temple reveals to the Reds that they have taken Lorenzo hostage and demand that they return their base. Having stored secret plans in Lorenzo, Surge agrees to talk terms with the Blues but Temple demands they send somebody else to negotiate with rather than Surge. The Reds, as a result, agree to send their team's orange counterpart, Biff, instead. After a strange talk between the two sim-troopers about which part of the body would feel the least pain from a gunshot, Temple and Biff agree, at the behest of their respective team members, to trade Lorenzo for the base.

The scene transitions to present day, where Temple narrates the Blues and Reds' everyday situation at Desert Gulch to Dylan and Jax, who are held hostage by the Blues and Reds. Temple then continues the story, transitioning us back to the past. At night, Temple manages to slip away from Blue Base to a hidden part of the canyon where Biff surprises him with a beer he got from shore leave. As the two reminisce about their shared past around a campfire, Dylan, while listening to the story, immediately realizes that Biff and Temple already knew each other, to which Temple reveals that he and Biff were friends in their youth and enlisted together; something Project Freelancer overlooked.

Back in the past, Biff surprises Temple again with news that he's planning to return to Earth in order to be with his girlfriend Georgina, whom he previously went AWOL for during his shore leave. However, this time, Biff ensures that he's leaving for good to be with her and needs to get a medical discharge to do it (hence the gunshot questions he asked earlier). Though taken aback by this, Temple agrees to help his friend. As the two figure out the details, jokingly ribbing each other in the process, the Project Freelancer's flagship, Mother of Invention, approaches Armada 8 from space.

Open to several shots of the Desert Gulch as the old Trocadero theme plays. Camera focuses on the Blue base as gunfire is heard. Cut Gene running up to Surge inside the base,

Gene: Sir! They're making another push!

Surge: So?! Shoot back! Victory is close at hand! Their flag must be around here somewhere.

Surge: "But" nothin'! A soldier follows orders no matter what! Just do what I tell you, son.

Cut to Gene join Cronut atop the base under heavy fire.

Cronut: With what? We're out of ammo. I'm shootin' blanks over here.

Gene: In that case, we're gonna have to resort to plan B...

The two stand up and start yelling at the Blues.

Cronut: You have table manners that leave much to be desired!

Gene: You smell like maybe you forgot to wear deodorant today!

Cronut: Your mother's lasagna is, mediocre!

Zoom out to the Blues watching.

Bucky: They're attempting to insult us, sir.

Temple: Yeah, I fuckin' noticed. This oughta shut them up.

Temple fires a sniper shot right between the two reds, who then take cover.

Bucky: Oh, come on! How come you always get the sniper rifle?

Temple: Because you're busy getting the prisoner. Also because go fuck yourself.

Gene: Mama mia! They got Lorenzo!

Temple: That's right! We got your fuckin' robot! Now give us back our base or we smash the Goomba!

Temple: No it isn't!

Temple: Whatever! Everyone, shut up or we're all gonna find out what kind of filling is inside this canoli!

Gene: Oh no, what're we gonna do?! Ideas! Anybody?

Orange soldier: If you guys had to get shot somewhere in your body, where would you do it?

Gene: Not now, Biff! We're in the middle of a war!

Biff: It's a legit question, dudes.

Cronut: How 'bout the pinky toe? That little piggy's had it comin' for ages.

Biff: Are you crazy? All the nerves in your whole body end in your toes, idiot. I wanna take a bullet, not feel pain.

Surge runs up and joins the group.

Surge: The Blue bastards have hidden their flag somethin' fierce!

Gene: Oh, and they have Lorenzo, Surge!

Surge: Blast! We can't let them keep the robot. I've hid all our top-secret battle station plans in that droid! We'll have to hold out for reinforcements. How's our ammo?

Gene and Cronut exchange a worried look. An eagle cry is heard. Cut to Surge addressing the Blues.

Surge: Listen up, you dirty blue bastards! Red team is graciously and selflessly willing to open negotiations. Your base are belong to us. Surrender now and we'll spare your meaningless lives.

Temple: No deal! Your last two parlays ended with literal back-stabbing. Send someone else.

Surge: How about Biff? He's expendable if the talks break down.

Cut to Temple and Biff talking in no mans land.

Biff: The butt? Are you insane? That's right next to my jingo-jangos, okay? Bullets splinter.

Temple: How 'bout the arm?

Biff: What? Yeah, I can't hear you because some idiot shot my ear off! No way. *growls* There's gotta be some part of the body that's expendable.

Temple: You just need to get shot in the appendix.

Temple: (beat) Was that supposed to be Pig Latin?

Bucky: Can you hurry it up, Temple!? Preferably before they find my Masturbatorium!

Temple: You're staring at me.

Temple: Are too! I know what you're thinking.

Temple: This is all my fault.

Biff: Whoa! Can we talk about this later? Alright? Everyone is staring at us.

Cut to a Temple telling the story in the present day. With Dylan and Jax as a captive audience.

Temple: It was the same damn shit with the same damn idiots. They get a thing, we steal the thing. We get a tank, they blow it up. It was like livin' in a... fuckin' Loony Toons cartoon. We didn't know it yet... but all that was about to change.

Cut to the Blue base at night, back in the flashback. Temple comes out of the base and walks out towards the rocks.

Loco is seen on top of the base aiming at Temple.

Loco: Who goes there?

Loco: No. You're talking to your best friend!

Temple: Oh ri-right. Yeah, of course I am. Loco, why don't you get some sleep.

Cut to Temple standing alone in the rocky area.

Biff: (off screen) Heads up.

Temple turns and catches a can of beer thrown by Biff.

Temple: Holy fuck! Where the hell'd you get one of these?

Cut to the two stand by a bonfire.

Temple: Uh... I remember someone drawing dicks on my notebook every time I went to the bathroom.

Biff: *laughs* Oh, and then he did those notebook checks. The look on your stupid face...

Temple: *laughing* Fuckin' asshole. What're bringin' that up for?

Biff: Georgina was in that class. You know? That-That's where we met.

Temple: I remember, it took you two years to finally ask her out. That, was a fun day.

Biff: Fun. Right. Yeah, you managed to unite the entire fucking cafeteria in a slow clap, you jackass.

Temple: I bet the Coast Guard doesn't, divide it's people into teams and have 'em, shoot at each other with loaded assault rifles.

Biff: Oh, they actually do, they just, use harpoon guns instead.

Dylan: (voice over) So, you two were friends before the service.

Cut back to present day.

Dylan: (cont'd) You knew each other?

Temple: Yeah, that's right. We grew up together. We enlisted together. "Buddy Team", they called it. Freelancer overlooked that fact when they assigned us to opposite teams in the same canyon... We found that fact out later.

Dylan: Was that at the Freelance-

Temple: (angrily) This isn't an interview, Dylan Andrews! Shut the fuck up and listen! (beat) The conversation inevitably turned to the same place it always did...

Cut back to the past.

Biff: You ever wonder what the fuck we're doing here...?

Temple: Like, all the goddamn time! The way I see it, it's gotta be some super-important government shit. Some, like critical testing stuff. When we get out, there's gonna be, medals, awards... fuckin' parades for us, dude.

Biff: For you. Not me, I'm getting out soon.

Biff: I'm not fuckin' with you.

Temple: This whole situation is garbage enough to begin with, but... at least we're in it together-

Biff: We're in it against each other, if you haven't noticed.

Biff: (beat) Red Team had shore leave awhile back and I snuck home back to Earth... (beat) Went AWOL, stowed away on a transport.

Biff: Yeah, it wasn't easy but I had to see Georgina.

Temple: Keepin' the old flame alive... So, wait, she hasn't moved on?

Biff: No dude, it's, super serious between us. That's why I need to get back. I don't wanna, say you owe me one, but-

Temple: Uh, yeah, yeah...  I'm the only reason you're fuckin' here. Y'know, if I had frequent flyer miles for every one of your guilt trips, I could cover your entire trip back to Earth.

Temple: Way I see it... it's my job to shoot you anyway. Might even give me a medal for this.

Biff: That's the spirit! Alright.  So, brass tacks. My pinky finger. I need you to shoot it off. Alright? I've thought about it a lot and that's gonna be my best bet.

Temple: Done. I've been waiting to shoot you since we were kids.

Biff: Ah, not now! We need witnesses, reports n' shit, alright? I'll need the pension when I get out.

Temple: I could shoot you now for practice.

Temple: I figure we can try a bunch of places and you can let me know what hurts the least.

Biff: Riddle me with holes.

Temple: Oh, thank god I brought along those explosive rounds.

Temple: (voice over) Plan was simple: Biff gets hurt. Gets a medical discharge. First-class ticket back home. But you know what they say...

Cut to the Mother of Invention approaching the planet.

Temple: (voice over, cont'd) No plan survives first contact with the enemy. 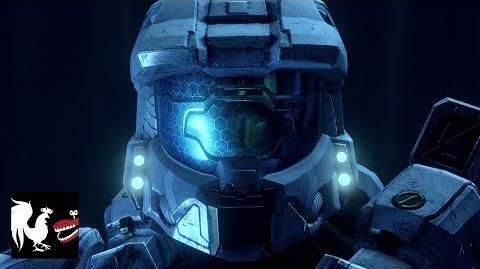 Retrieved from "https://rvb.fandom.com/wiki/Blue_vs._Red?oldid=146548"
Community content is available under CC-BY-SA unless otherwise noted.