At the ship, Tex fills Church in on the events of Out of Mind, (despite Caboose's constant, inane interruptions) then reveals that Wyoming was teleported away before he woke up from being knocked out by Tex. Church asks Tex what Wyoming's AI was called, to which she promptly responds, "Gamma." Church sighs, and calls up Gary.

Gary receives the phone call, seeming very evasive. Church calls him Gamma and asks if Gary was lying to him. Gary responds, after a pause, "No...", then tells Church he has to go and hangs up. Wyoming, nearby, asks if the Blues know Gary's true identity. Gary tells him that there is nothing to worry about, and that they cannot be stopped now.

Back at Blood Gulch, Church calls up Vic to ask for orders. Vic tells him that he must attack the Red Base now, and that he should send some people through the caves to do so before he hangs up. Frustrated, Church wonders why everyone is always hanging up on him.

Down in the caves, the Reds come upon some kind of large computer screen, showing various locations all around the canyon. Sarge orders Grif to go and keep looking for Andy, while the rest of the Reds watch the screen, seeing first their own Base and then the Blue Base. Sarge, who at first believes that this was a Blue plot, wonders why the camera shows their Base too. Simmons speculates that this might not be a Blue plot after all, but maybe this equipment was created by a race of advanced beings which mysteriously disappeared, leaving behind only a legacy of strange, enigmatic technology. Donut analyzes this: "That's gay." Simmons brushes this off with "eh, we'll finish this fight later." As the camera moves over Blue Base, the Reds see Sister's armor without her and come to the conclusion that she has been disintegrated just as Grif returns from his recon. Sarge breaks the news to him in a crude manner; Simmons consoles Grif. However, Grif's tears are interrupted when Donut points out, "Hey, she's not dead! She's just naked!" Grif responds with "What?! That little slut! I'm gonna kill her!"

Fade in to Church

Tex: I had to leave, I found Wyoming.

Tex: I thought I tracked him back to O'Malley. But, by the time York and I got there-

Church: York- your old freelancer buddy? Was Carolina with him?

Tex: She was already dead.

Caboose: And what about Bermuda?

Church: That's not a State, dumbass.

Tex: But he still had Delta.

Church: Delta; the A.I.? How? I thought they took them- wait a minute, wait a minute, how was he even still alive? Aren't we hundreds of years in the future?

Tex: I thought it was because of his armor. You know all the freelancer suits had some kind of enhancement.

Church: No dude, that's all natural.

Tex: York's was some kind of healing mechanism. It would help him recover from wounds in battle. I thought it might have kept him alive all these years. But after I found Wyoming, I knocked him out and downloaded logs from his helmet. There's somethin' going on, Church, with a lot of people working against us.

Church: Well what did Wyoming say when he woke up?

Tex: He didn't, before I could interrogate him, he teleported away. One second he was there, and the next he was gone.

Caboose: What about the second after that?

Tex: Can I kill him?

Church: No, I'm saving him in case we ever need him for food. So, Wyoming's armor lets him teleport?

Tex: I don't think so. I think someone grabbed him from somewhere else.

Church: How is that possible? The only technology I know that could do that is- ...Wait a minute. Each freelancer had an enhanced suit of armor and an A.I., right?

Church: Your armor was invisibility, and your A.I. was Omega.

Caboose: Wrong. Oops, missed that one, can we go back?

Church: What was Wyoming's A.I.?

Cut to O'Malley's old base, with the sound of a phone ringing

Church: Hello, this is Church, Gary. Or should I call you Gamma? Have you been lying to us?

Gary: lying is such a shisno concept. i mean human concept

Church: You're a computer, I thought computers can't lie.

Gary: they can if they are programmed to lie.

Church: Were you programmed to lie?

Gary: i have to go, church.

Church: Wait a minute, what about the aliens, how do we-

Wyoming: Hmm, do they know?

Gary: there is nothing to worry about. we are close to the end. we will not be stopped now.

Wyoming: We should keep going, hop in.

Back to Church, with his radio making connection sounds

Church: Hello? Vic, is that you?

Church: Why're you calling me?

Vic Jr.: Everything been goin' good, yeah that's great, listen, don't have much time to talk, uh been discussing things here at Blue Command, we think everything is bad, and now is the time to go attack the Red Base. Turns out the Reds are up to no good, and somebody needs to kill 'em. A good way to do that might be to send some people through the caves, yeah, take 'em by surprise, anyway, can't talk, gotta go, seeya la vista.

Cut to the Reds entering a structure via a bridge, in their vast underground lair, and coming across a viewscreen switching between shots of the Canyon

Sarge: Huh, what's all this business?

Simmons: It looks like a bunch of computer equipment, sir.

Donut: And it's attached to some kinda T.V. thing.

Sarge: So it is. Astute deduction, Donut.

Grif: It shows all different parts of the canyon. Look, there's our base!

Sarge: Ah yes, another incredible observation from the stating-the-obvious department. Thanks for nothing, numbnuts.

Grif: Fine. (wandering off) Huhh, I hate my job.

Simmons: I hope this thing isn't connected to the internet.

Sarge: Euh, the Blues must've set this up. Crafty devils. Spying on us all along. ...What's all that?

Sarge: Why would the Blues spy on themselves?

Simmons: Maybe the Blues didn't set this up. Someone else might've.

Sarge: Or maybe the Blues are so incredibly arrogant, they just wanna see themselves on T.V. Boy I bet they have those stupid liberal equal time laws. Commie Blue bastards.

Simmons: What if all this technology is just left over from an ancient civilization that was way more advanced than us?

Donut: Wait a minute, how could an ancient civilization be more advanced? If they were so advanced, where did they go?

Simmons: They could have mysteriously disappeared, only leaving behind a legacy of enigmatic technology.

Donut: Oh no, what happened to her?

Simmons: Why would they do that? Oh, we can't tell Grif. He's gonna be devastated.

Grif: Tell me what?

Sarge: Tell you that your sister's been vaporized by the Blues.

Sarge: Heh heh, it's just like rippin' off a band-aid. Quick and incredibly painful.

Simmons: We just talked about this, I thought we agreed not to tell him.

Donut: You really need to start thinking about other people's feelings, Sarge.

Sarge: Son, the only thing I need to do is stay red and die.

Grif: How could this have happened? Oh man, that was my little sister. I mean, I know we don't always see eye to eye, but I still loved her.

Simmons: This has to be hard Grif. I don't know what to say.

Grif: I-I just, I had no idea the last time I saw her was gonna be the last time ever. I'd give anything to see her again and just to talk to her one last time, and I'm never gonna get that chance. It's the most empty feeling in the whole world.

Grif: What! That little slut, I'm gonna kill her! 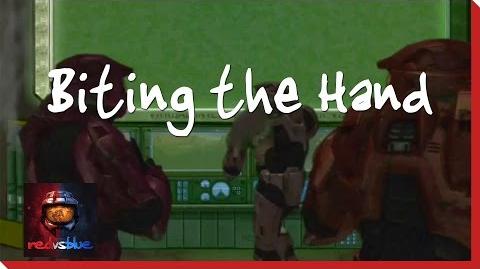 Retrieved from "https://rvb.fandom.com/wiki/Biting_the_Hand?oldid=145798"
Community content is available under CC-BY-SA unless otherwise noted.