Dylan asks Jax about the story of Jonah from the Bible and explains that she feels like Jonah himself, being inside the belly of the beast. Tired of being sidelined, Dylan decides to investigate the base and has Jax distract Sarge in order to do so. Jax agrees and pitches a military drama to Sarge as a distraction but Sarge doesn't buy into it. In order to convince him, Jax recounts Stanley Kubrick's decision to cast real-life sergeant R. Lee Ermey in his film Full Metal Jacket and explains that Sarge can have a similar experience as Ermey. Interested, Sarge agrees to do a screen-test for Jax, allowing Dylan to begin sleuthing.

Dylan sneaks her way into the room housing the cloaking device and eavesdrops on a conversation between Temple and Loco. Temple berates Loco for not finishing the device and questions why he didn't just build a bomb like he initially asked. Loco assures Temple that what he's building will be much better but Temple threatens Loco to finish his work soon or he'll finish him. Suddenly, Dylan accidentally knocks over an empty soda can, alerting the two Blues. They approach Dylan's hiding spot but only find a toy; Dylan nowhere in sight.

Elsewhere, Dylan tells Tucker about what she heard and explains that the Blues and Reds are being dishonest with them, though Tucker remains distrustful of her. Dylan tries to convince Tucker that she's trustworthy but Tucker doesn't budge. He then explains that the Blues and Reds allowed him to plan out their campaign against the UNSC but Dylan reveals that his campaign is merely a video game. Dylan continues to point out the level of secrecy the Blues and Reds are putting out and acknowledges that they may be hiding something. However, Tucker continues to argue with her in the Blues and Reds' defense. Unable to convince him, Dylan leaves to continue investigating until Tucker informs her about Temple's network computer. Dylan, as a result, makes her way to Temple's office.

Meanwhile, Sarge undergoes his screen test with Jax, performing numerous monologues in front of a green screen. The two are soon confronted by Temple, Surge, and Buckey who ask about Dylan's whereabouts. Jax tries to stall but is quickly threatened by the three Blues and Reds.

In Temple's office, Dylan has V.I.C., who has been helping her since Blood Gulch in exchange that she kill him after three "wishes", hack into Temple's network computer in order to gain access to the computer's files. While searching, VIC discovers a video file of himself and shows it to Dylan. The file in question is revealed to be the distress message of Church. As Dylan watches the video in shock she is confronted by Temple and Surge, who threaten her at gunpoint.

Dylan:(voice over) You know the story of Jonah?

Cut to Jax and Dylan in the base watching the whale things through a window.

Jax: Mm, that does ring a bell. Was that on the Blacklist?

Dylan: The Bible, actually. Jonah was swallowed whole by a whale.

Jax: Belly of the beast, huh? Sounds like this "Bible" ripped off Aliens.

Dylan: I feel a bit like Jonah right now. But this whale has secrets. I dunno about you but I am sick of being sidelined.

Jax: Ooh! Are we gonna do some snooping around?

Dylan: Nooo, I'm gonna do some snooping around.

Jax: Oh, come on, you know I could help! I don't know if you've noticed, but I'm pretty good at randomly bumping into things that move the plot forwards?

Dylan: You've got something more important to do. I need you to distract someone while I look around. (whispering) I think the Blues and Reds have Sarge spying on us.

Cut to reveal Sarge watching them from across the room.

Sarge: (suspiciously) I, uh, I was just walkin' by! I didn't hear you say exactly what you said just now! (walking away) See ya later ! Bye! Gotta go! Woo!

Jax: (beat) I think you might be onto something.

Cut to Jax approaching Sarge while Dylan watches from the shadows.

Jax: (hesitant beat) Sarge, have you ever considered a life in show business?

Sarge: Ha! That's ridiculous. Show biz is a young man's game. And I was an old man when your old man was a young man. Young man.

Jax: Not necessarily. Some people do get into it late- eh later.

Sarge: Well, despite my chiseled frame and iconic eyebrows... I, am a soldier! Not a movie star!

Jax: Ya' know, you remind me of R. Lee Ermey. He was a marine. A real one like you. He was consulting on Fullmetal Jacket and he was so good that Kubrick cast him in the actual film right then and there!

Jax: I'm actually writing a military drama myself at the moment. (walking away) But if your not interested, I guess I could check with Surge. Apparently he studied at Julliard.

Sarge: (cont'd) Now don't you go puttin' words in my mouth! I never said I wasn't interested. Now what exactly is this movie about?

Jax: It's a military courtroom drama about a drill sergeant who has to defend himself in court after an accident during a drill gets his whole squad killed.

Sarge: Sounds fantastic! I've long fantasized about Grif dying horribly during routine training exercises. When can I see the script?

Jax: Script? Ugh- Yes, of course. I-I mean once you have the part of course, of course. There's an audition first.

Dylan sneaks away in the background as Jax talks.

Sarge: Alright, alright ! I'll give it a shot! Personally, I've always seen myself playing the thirty-something CEO of some exciting internet startup.

Jax: Yeeaaah, I think that's gonna be a bit of a stretch. Why don't we stick to what you know?

Cut to Dylan crouching out of sight as Gene walks by. She moves on the room with the cloaking generator and hides as Cronut and Bucky exit the room.

Dylan enters the room and hides behind a crate as Loco and Temple argue.

Temple:(cont'd) So sick of them I could puke!

Temple: Try harder, fuckface! When will it be done?

Temple:(mockingly) "Probably! Probably!" What the fuck, Loco!? I've given you everything you've asked for. You said it would be ready months ago!

Loco: Well... The quantum capacitors are working. The flux matrix is inverting the matter's states but I still can't get the neutron dispenser to polarize the anti-matter and I'm out of AA batteries.

Temple: Why couldn't you just build me a huge freaking bomb like I asked!?

Dylan moves slightly, causing a can to roll along the top of the crate.

Temple: And It's going to be finished soon. Or you are. Got it?

The can falls and makes a small noise.

Loco: It'll be finished by the-

The two ready their weapons and move towards the backside the crate.

Dylan is shown to be gone, with a small spartan plushy in her place. Temple suspiciously looks to the doorway.

Loco: Oh you're in trouble now! Should I arrest him, boss?

Dylan: (voice over) I'm telling you, Tucker, I know what I heard.

Cut to Dylan talking to Tucker.

Tucker: Well then what is it?

Dylan: I don't know! But it most definitely shows that they're not being honest with us.

Dylan: I'm not some... reality TV host. And I promise that I didn't lead that bounty hunter to you. Can we please just bury the hatchet and focus on what's important?

Tucker: They haven't given me one single reason not to trust them, Dylan.

Dylan: Then explain why they're keeping us in the dark about everything.

Tucker: They're not! Look, they left me in charge of planning the campaign against the UNSC!

Tucker: What? No! It's a tactics simulator. Advanced military stuff.

Tucker: ...Huh. Well, I guess that explains the micro-transactions.

Dylan: They're distracting you, Tucker! And where are Carolina and Wash? I heard they'd joined up with us?

Tucker: They're out gettin' some grub.

Dylan: She told you that?

Dylan: So you're seriously telling me that nothing about this place smells fishy to you?

Dylan: Figuratively, Tucker! Figuratively fishy! Almost all the doors around here are locked, I can't find a single computer that's networked...If they were being so open why all the secrecy?

Tucker: I wouldn't want a bunch of random people wandering around my house either! They might steal shit! Or walk into my masturbatorium!

Dylan: Ugh. What if it's more than that? What if there's stuff they don't want us to see? Ya'know, I don't need your help. I just thought you'd wanna know.

Dylan: What about it?

Tucker: He has a networked computer. I've seen it.

Tucker: Just let me know what you find, okay?

Dylan leaves. Cut to Jax and Sarge near a green screen set up.

Jax: Okay, are we ready? Sarge, did you choose a monologue?

Jax: Alright-y then, I will get in position.

Sarge: Remember, Reds. No bastard ever won a war by dying for his country! He won the war, by making the Blue bastard die for his country! Now... should we win today the 4th of July will no longer be known as an American holiday, but as the day the world stood up, in one voice, and said: (Scottish accent) You may take our lives, but you will never take our-TRUTH! You want the truth? You can't handle the truth! Second place: set of stake knives. Third place: martini...shaken, not stirred.

Cut back to Sarge. Music resumes. Camera slowly zooms in on Sarge.

Sarge: He's dead, Jim! You're a wizard, Harry! Feel lucky, punk? Say what again! Over the line! Hasta la vista! A great big bushy beard! This. Is. My boomstick! How am I doin'?

Music stops. Cut back to Jax.

Jax: Those are just titles, Sarge. And I'm pretty sure you made that last one up.

Sarge: *chuckles* Right. So, did I get the part?

Jax: How 'bout we try some improv?

Temple: (off screen) I've got a better idea.

Cut to reveal Temple, Surge and Bucky nearby.

Sarge: In her quarters, Sir!

Temple: Wrong. They're empty. You. Shutterbug. Tell me where she is.

Jax: (nervously) Have you gentlemen ever considered a life in show business?

The three aim their guns at Jax.

Cut to Dylan in Temple's office. She accesses the computer only to find a password screen.

V.I.C.: Ho ho. Well. Your wish is my command, duderino! This genie is poppin' off the bottle and ready to roll! Watchya need?

Dylan: I need access to this computer. Can you hack into it?

The computer transitions to Temple's homepage.

V.I.C.: Wait! Little reminder, dudette. You've got three little wishes before you have to control alt delete me! Off the face of reality! That was the deal.

V.I.C.: Right! Haha! This is wish number dos! You promised duderino! I don't wanna stand up my date with death. We're takin' the river styx to Disneyland! I'm doin' shots with Anubis, dude! I'm playin' twister with the reaper!

Dylan: Keep your voice down! Do you a silent mode of something?

Dylan: Knock it off. Are you in?

Dylan: Have you found anything?

Textbox: Whoa dude, dude! You are not gonna believe this, dude OMG.

Dylan: What is it?

Dylan: What does that mean?

Cut to show Temple and Surge approaching her.

Temple: Why am I not surprised?

Temple: I think it's about time... we had a little chat. 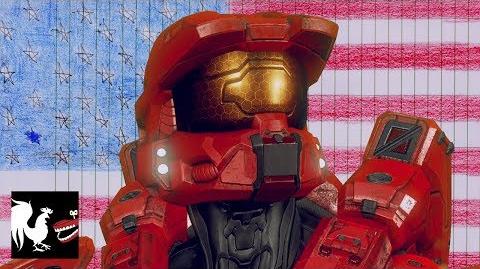 Retrieved from "https://rvb.fandom.com/wiki/Belly_of_the_Beast?oldid=146146"
Community content is available under CC-BY-SA unless otherwise noted.