On a lone island, Carolina gazes out towards the ocean when Washington calls out to her. He informs her that he found no sign of Agent Illinois, who according to Carolina, was a fellow Freelancer that was bent on life after the project, unlike the other members in the program. After discovering a photograph inside Illinois's hut, Carolina and Wash talk about their past and what they wanted to do after the project. Carolina regrets the choices she made with York and believed she could start a new life with him after Freelancer. She attempts to toss away York's lighter, her last remnant of him, but Wash stops and comforts her. The two share a moment until Wash realizes how they can lure their hunters to them via the recovery beacons inside their armor, which Wash switched off long before. They activate their beacons and draw the Blood Gulch Crew, along with the Blues and Reds, to their location.

After Tucker introduces the Freelancers to the Blues and Reds, Temple explains the situation about the UNSC to Wash and Carolina back at the underwater base and states that they must fight back to take the UNSC down. However, Carolina argues with Temple over the best course of action on how to handle the UNSC and suggests they have Dylan publicize the story on them, wanting to take a more diplomatic solution rather than a violent one. Temple defuses the situation by suggesting they discuss the matter over breakfast and decides to give Carolina and Wash a tour of the facility.

Temple leads the two Freelancers to a room where he claims to keep "Freelancer relics." Suddenly, Carolina and Wash become shocked upon seeing several former Freelancers, including Illinois, surrounding the room, all frozen and having starved to death within their armor. Temple reveals that he has been hunting down and killing all of the Freelancers by locking them in their armor until they die of starvation or dehydration and adds that he was worried Carolina would recognize his voice. Wash and Carolina then ready themselves for a fight, but Temple proceeds to lock down their armor and claims that he will kill the Reds and Blues before they can discover his plot. He then leaves Wash and Carolina in their frozen state with the rest of the Freelancer corpses, locking the door behind him.

The camera pans over a sandy crescent shaped island, with palm trees and ocean all around. CAROLINA is seen standing on the beach, facing towards the ocean.

Carolina: (turns back to face WASHINGTON) Sorry, must have spaced out. Any luck?

Washington: No sign of Agent Illinois.This is definitely his place though.

Carolina: How can you tell?

Cut to a picture frame with YORK, CAROLINA, ILLINOIS, NORTH, and WYOMING relaxing, all with drinks in their hands. WYOMING is sitting on the side, his arm resting on a chair that YORK and CAROLINA are both sitting in, with YORK's hand around CAROLINA's shoulders. NORTH is in front of them giving the "peace" sign, with Illinois in front holding a bottle of beer.

Washington: Really takes you back, huh?

Washington: (talking about York and Carolina) You two look cozy.

Carolina: Pretty sure I hit him for doing that.

The two walk back outside, towards the ocean.

Washington: Seems like our friend left in a hurry. The only thing missing from the place is his armor.

Carolina: But where did he go?

Washington: No note. Your guess is as good as mine. Good call in finding him here though.

Carolina: (turning towards WASHINGTON) What do you remember about Agent Illinois?

Washington: Demolitions expert. He wasn't top tier, but he was a crack-shot with a rifle––

Carolina: I mean out of the armor.

Carolina: Illinois was always... different. He wasn't ambitious or competitive like the rest of us. He didn't fight for an A.I. or screw over his friends to get placed higher in the rankings. Instead, he was doing a job and dreaming up a life after. Of an island chain that stretched around an entire planet. A shack by the water, with a bar of spiced rum, and a tiny red sailboat. He did it.

Washington: I didn't realize you two were close.

Carolina: We weren't. He and York were drinking buddies though. I heard all about it hanging out with him.

Carolina: Sometimes, I think York was my chance at a fresh start. I threw it down an elevator shaft.

Washington: You're being too hard on yourself. You've changed over the years, I've seen it myself.

Washington: Well... it's never too late to start over again.

Carolina: Do you really believe that, David?

Washington: Well, I don't know if rock singer is really in your future... but yeah.

Carolina: It was fun to watch them squirm though, wasn't it?

Washington: I changed my mind, you are evil.

Carolina: (holding out York's Lighter in her palm) This is all I have left from York. From Freelancer. Just this and my armor.

CAROLINA starts to throw the lighter into the ocean. WASHINGTON quickly grabs her arm, stopping her.

Washington: You don't have to do that.

Carolina: What about starting over?

Washington: I mean, you don't have to destroy the past to have a future.

WASHINGTON works his hand into CAROLINA's, in which she accepts it and the two lower their arms and look out towards the horizon.

Washington: (softly) Take off your suit.

CAROLINA quickly yanks her hand away.

Washington: I got an idea, take it off.

Washington: (stammering) No, eh, no... not like that. The recovery beacons. That's the key.

Washington: Every suit that belonged to Project Freelancer was special. They all had recovery beacons in them, so agents could be located if they were ever in distress. Personally, I didn't like the idea of walking around with an active tracking device.

Carolina: (understanding) So you turned ours off, I remember!

Washington: Well, maybe that's why we're still around. Whoever's been tracking down the Freelancers has a way of following the beacons.

Carolina: So we turn ours back on and lure the hunters here?

Washington: Unless you have a better idea.

Carolina: Can't say that I do.

A moment passes where the two Freelancers stare at each other.

Carolina: Are you going to turn around?

Washington: (disbelievingly) Oh man, you are not going to believe this.

Carolina: Don't tell me, the Reds and Blues?

Washington: (scoping out) It's twice as bad as that.

Cut to WASHINGTON and CAROLINA walking up the beach to where TUCKER is standing.

Washington: Let me guess, Sarge built robot versions of everyone.

Washington: ...I'd really rather not.

Temple: Washington, Carolina. It's an honor to meet you both.

Washington: What. The. Heck.

Carolina: Can you explain why there's two of everyone?

Tucker: They're from another gulch. That's why they look like us. Look, the whole story is long and complicated and we need to get out of here ASAP. You really fucked up activating your beacon. That's how they're tracking us down.

Washington: We were counting on it! We're luring them here.

Tucker: Well lucky for you, we can do the same thing.

Washington: From our perspective, we set a trap and you all fell in it.

Temple: Well, your trap wouldn't have worked anyway. The UNSC has a nasty habit of nuking from orbit first, asking questions later.

Tucker: Oh, big surprise. You guy's haven't figured out what's going on yet. Score another for Team Tucker.

Carolina: You have? And Church?

Temple: If you come with us, we'll explain everything.

Cut to a conference room where TEMPLE, SURGE, GENE, TUCKER, SARGE, SIMMONS, WASHINGTON, and CAROLINA are standing around a table.

Tucker: Temple only left out the part where Sarge fell in love with himself and Simmons realized he can't stand his own reflection.

Carolina: What about the reporter. Did she leave?

Simmons: No, she's around here somewhere.

Sarge: We've been keeping her in a "don't need to know basis." Can't trust the press these days.

Carolina: (slowly) Why not? She seemed perfectly trustworthy to me.

Tucker: Well, we don't, like, know what her agenda and stuff is.

Carolina: But Tucker, she can get the real story out. She publicizes this insane plot by the UNSC to kill the ex-agents––

Carolina: If she can get the story out, it's game over.

Temple: There's no easy way out of this. This ends with us taking the fight to those that would see us all dead. This ends in violence.

Carolina: What if it didn't have to––

Temple: They killed your friends.

Tucker: They have Church!

Carolina: And they need to be brought to justice, but what if for once, it was in a courtroom or a court martial and not at the end of somebody's knife?

Tucker: Are you feeling alright?

Temple: Our adversaries are too powerful! If we come at them now with just accusations, they're going to turtle up and write it out. They're looking for us. They're poking their head out of their shell and I aim to chop it the fuck off!

Temple: Anyway, we're getting ahead of ourselves here. Strategizing can wait until breakfast, at least.

Simmons: And breakfast is?

Everybody groans in disgust.

Temple: HEY, there's not like there's any cows or chickens swimming around in our underwater lair–– uh base. (clears his throat) Anyways, how about I give our guests the grand tour?

Cuts to an elevator door opening and TEMPLE, WASHINGTON, and CAROLINA walking down a dimly lit hallway.

Temple: Just through here, sorry about the mess.

Washington: You wanted to show us, what?

Temple: Uh, we just gathered some relics from Project Freelancer. I thought you both would appreciate the collection.

TEMPLE stops in front of a doorway leading to a room where suits of armor can be barely seen. WASHINGTON and CAROLINA continue forward.

Temple: Oh, lemme get the lights.

Washington: (gagging) Uh, I think you need to check your plumbing. That smell...

Cuts a a view of a suit resembling Illinois', complete with a beer bottle.

Carolina: (slowly) I Don't think these are just suits of armor...

They slowly turn to TEMPLE.

Temple: I killed them. I. MURDERED. Them. I set my vengeance free upon them and it felt so-hoho good! But not as half as good as this feels.

Washington: Well, if its a fight you want––

Carolina: Then I think we can oblige.

WASHINGTON draws and aims his weapon while CAROLINA holsters hers and sets herself into a defensive position.

Temple: (laughing) I could never best you in a fight. And anyway, don't they say that revenge is a dish best served... frozen?

Temple brings out a toyish looking radio, something LOCO would use in his contraptions, and presses a button.

Washington: (as his armor locks down and freezes) Eagh...

Temple: My greatest fear is that you would know me, Carolina. That you'd recognize my voice and the game would be up.

Washington: (with effort) Carolina. I can't...

Temple: Ah, the armor-lock technology was salvaged from Project Freelancer. Fate is not without irony, and the past, is not with its just dessert.

Washington: That yarn about the UNSC, they're not really killing Freelancers.

Temple: (cheerfully) Of course not! I am!

Temple: Because of you did to us. For what she (gestures towards CAROLINA) did most of all. The record, for staying alive in this room, locked in your armor is eight days, and eleven hours. I know you've always been the most competitive of the Freelancers, Agent Carolina. So, do try to do better for me.

He turns to leave.

Washington: The Reds and Blues... will come looking ...

Temple: The Reds and Blues will be dead before they even miss you. So long, Agent Washington.

TEMPLE slowly walks out of the room. 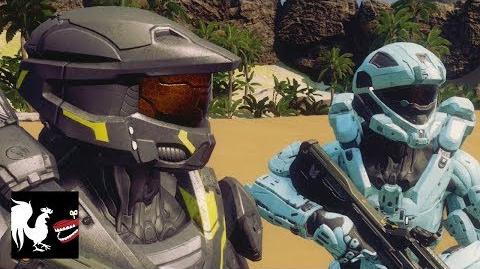 Retrieved from "https://rvb.fandom.com/wiki/Battlescars?oldid=146349"
Community content is available under CC-BY-SA unless otherwise noted.