An Audience of Dumb is the fourteenth episode of the second season and the thirty-third of The Blood Gulch Chronicles.

Still unable to brake, Tucker runs over Grif and the Warthog with Sheila. Tucker radios the Red Team to tell them to turn off their radios. Initially they refuse, so Lopez serenades the Red Team with a love song about Sheila (in Spanish), causing the Reds (minus Donut, who is forced by Sarge) to all switch off their radios.

Meanwhile, Church and Tex meet Caboose's mostly incorrect mental images of the Red Team. O'Malley suddenly kills Caboose's mental image of Church — thus making Caboose completely forget who Church is. Tex and the real Church give chase to O'Malley, eventually cornering him. Hoping that Tucker has been successful, Tex and Church shoot O'Malley, chasing him out of Caboose's mind. Outside, a slowly fading beeping is heard, showing that O'Malley is dying since he doesn't have a host. However, he detects one last radio transmission from Doc, who is attempting to contact Blue Command, and takes possession of him.

Tucker: Ahh, Sheila we have to slow down or we're gonna run into that jeep!

Tucker: You take evasive action! Hey, Lopez, help me out! Can't you talk to her?

Grif and Donut are crouching behind the jeep

Donut: Well old buddy, it looks like this is the end for us. Since we're going to die anyway, there's only one thing left for us to do. Grif-

Grif: If you actually suggest what I think you're about to suggest, I'll just have to kill myself.

Donut: -lets make a break for it!

Grif: Whew! In that case lets go on 3. That's worked well for me in the past.

Sheila is heading right at the jeep

Sheila rams into the jeep, blowing it up and sending Grif and Lopez flying. Lopez yells in surprise of the explosion as he lands in a pool of Grifs Blood. Grif is briefly shown splatterd on the ground. The scene changes to show Sheila being covered by dust and rock lifted by the explosion. The scenes cuts to inside the red base. Donut runs up to Sarge and Simmons Panting heavily.

Sarge: Good golly Miss Molly! What is going on out there?

Donut: (Panting as he speaks) Sir, the blues are attacking with their tank! They-they blew up the Warthog, again.

Simmons: I wonder what jeeps ever did to those guys.

Donut: Grif and I just barely had enough time to make it out of there. Right Grif? ....uhh, Grif?

Cut to inside Cabooses mind

Church: (to Caboose's mental image of Church) Why the hell did they pair me up with you?

Mental-Church: I wanted to keep my eye on you. I don't trust giantic turds trying to steal my best friend, you rimjob!

Church: Well, this is going to be a great trip.

Mental image of Church approaches the ledge overlooking the area

Mental-Church: Attention Reds! The great Caboose demands an audience with you! So listen up, you blowjobbing cocksuckers!

Mental-Simmons: Caboose? Oh no, he's come to kill us!

Mental-Grif: Would someone please help me, I don't want to die!

Mental image of Donut appears, speaking with a girl's voice

Mental-Donut: I love Caboose, and yet I'm so afraid of him!

Mental image of Sarge appears, speaking like a pirate

Mental-Sarge: Argh, I be having a southern accent, your luck.

Mental-Caboose: Fear not reds, I come here not to destroy but instead to ask for your assistance on this day.

Church: And Caboose, come on dude, seriously. Have you paid attention to our enemies for one second?

Mental-Caboose: I beg your pardon?

Church: First of all that guy (referring to Grif) he's not yellow, he's orange. And since when is there a girl on the red team?

Mental-Sarge: Argh, I got termites in me leg!

Church: And that is not a southern accent.

Mental-Donut: Do you have any tampons?

Church: Seriously, what is the matter with you people?

Church: Leonard, are you okay?

Tex: There he is!

pans in on O'Malley on a balcony, wearing black armor and holding a sniper. He laughs evily

Tex: Lets go get him! (she runs off the edge)

Mental-Caboose: I am sorry, have we met?

Church: What? It's me Church.

Mental-Caboose: I don't seem to have any memory of you. My name is Michael J. Caboose, it's a pleasure to make your acquaintance.

Church: Oh you've got to be freaking kidding me. I just hope Tucker's doing a better job out there getting the reds to turn off their radios.

Cut to the real world. Tucker standing on Sheila just outside red base

Tucker: Goddammit! This isn't going very well at all. You okay Lopez?

Tucker: Whatever you big showoff. How about you Sheila, you still online?

Tucker: Okay, we should be close enough to hack into their radio frequency. Lopez get inside Sheila and do your business.

Tucker: Oh my God. Remind me to hose you two off when we get back to base.

cut to Sarge, Simmons, and Donut inside red base

Sarge: Well this is a devil of a pickadillo. Simmons get on the squawk box and tell command-

Tucker: (over the radio) Red guys, are you there?

Sarge: What in buttery goodness? Who is this?

Tucker: It's me Tucker, I'm one of the blue guys. Look I don't have time to explain, but I need all of you guys to shut off your radios right now.

Sarge: Boy, it'll be a cold day in hell before I take orders from you.

Tucker: Look, it's really important alright? Normally I'd just shoot at you guys and steal your girlfriends but today's different. I need you to trust me on this.

Sarge: Well I may have spoke too soon. That is an interesting and well thought out, not to mention clever and timely I might add, proposition. Simmons, would you care to deliver our rebuttal?

Donut: Yeah, suck it blue! Now that's what I call an old school zinger. In your face blue dude, in your face!

Cut to inside Caboose's mind. O'Malley jumps from ledge to ledge laughing evily. Tex and Church are pursuing him.

Tex: Hurry up Church! He's getting away!

Church runs up to Tex

Tex, then Church, hop over a gap and land on the ledge and continue chasing O'Malley. Cut to the real world, the blues outside red base.

Tucker: Dammit, these guys are not backing down! Lopez, looks like we're gonna have to go to Plan B.

Lopez exits Sheila. words indicating a music video appear at the lower left corner of the screen. he begins singing a love song, accompanied by music, to Sheila

Sarge: What in Betty's bloomers is on the radio now? Sounds like the feral cry of a retarded Mexican sasquatch!

Simmons: Turn it off, turn it off! Please God make it stop!

Cut back to inside Caboose's head. O'Malley runs into Tex and Church.

Church: Alright, O'Malley, this is it. From now on, if anyone makes my girlfriend cranky and psychotic, it's gonna be me.

O'Malley: Never! The darkness will swallow you whole!

Church: Dead end, O'Malley! You're just one big headache, and I got a whole pistol full of aspirin!

Church: I got half a mind to kill you...

Church: ...and the other half agrees!

Church: You're about to split...

Tex:Now you're just embarrassing yourself.

Cut back to red base. Lopez's love song singing is still going on.

Sarge: That's it, I've had enough, can't take anymore! Everybody, switch off your radios.

They shut off their radios. Tucker sees this from above and runs over to Sheila and Lopez

Tucker: (giggles with delight) It worked! Hey turn off your radio, quick!

Lopez enters Sheila. cut back to inside Caboose's head, Tex aiming her gun at O'Malley

Tex: Nice knowing you, O'Malley, but payback's a bitch, and so am I.

Tex: There's only one way to find out.

Church: Huh, he just disappeared. I expected like an echoing laugh or the smell of brimstone at least. I don't smell any kind of stone. Don't you think that's weird, Tex? Tex? Tex, where'd you go?

Credits rolls to the tune of "A Girl Named Tex" by﻿ Trocadero. Comes back panning away from Caboose's head and floating up into the air while beeping.

Church: (echoing from Caboose) Tex, where'd you go? How do I get out of here? What happened to O'Malley?

The screen (symbolizing the O'Malley AI) rises high into the air and slowly fades to black and the beeping goes slower and deeper until it stops and the screen goes black. screen returns as the sound of a radio comes on. (An interesting note that the beeping, when translated from morse code, reads "Cockbites".)

voice on radio: Come in, Blue Command. Do you read me?

Screen pans right into an area on the side of the cliff and right up into Doc.

Doc: This is Medical Officer DuFresne. Is anyone there? Do you read me?

(Here are the lyrics to "Mi Armor Tiene un Canon Grande" (My love has a big cannon), sung by Lopez)

(only shows the first verse) 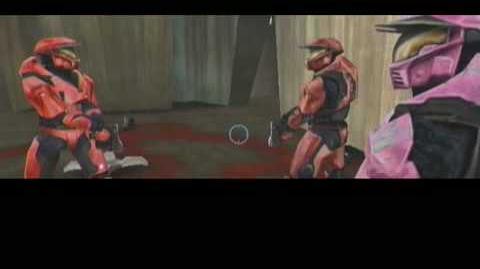 An Audience of Dumb
Original 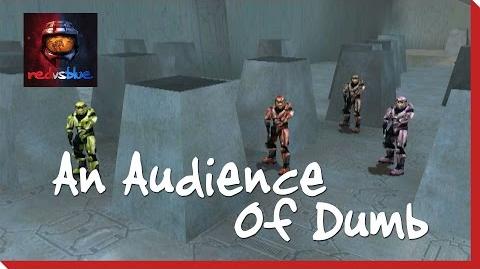 An Audience of Dumb - Episode 33 - Red vs. Blue Season 2
Remastered
Add a photo to this gallery
Retrieved from "https://rvb.fandom.com/wiki/An_Audience_of_Dumb?oldid=141083"
Community content is available under CC-BY-SA unless otherwise noted.