Red vs. Blue Wiki
Register
Don't have an account?
Sign In
Advertisement
in: Teams, Alliance of Defense

The Alliance of Defense (AOD) is a military and scientific organization introduced in Red vs. Blue: Zero.

AOD is the military power whose facility was broken into by Viper, and it is the body that Shatter Squad reports to. The AOD has a scientific division, of which Starlight Laboratories is a part. They are responsible for saving agent East's life as a child and giving her the "Burst Step" ability in the process. 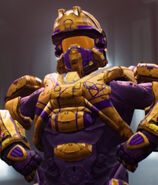