After successfully deploying Carolina’s bubble shield, and in turn saving the Reds, Washington, and Kimball, Epsilon briefly cycles through his memories of Theta, Delta, and Omega, before awakening at Crash Site Bravo in front of a relieved Blood Gulch Crew. Carolina informs Epsilon that the Feds and Rebels are scattered across the planet as a result of Armonia's destruction, with several soldiers mourning at Bravo. She then expresses her concern for Kimball, as the Feds blame her for Doyle’s death. Wash then approaches the two and explains to Epsilon that Felix and Locus survived the nuclear blast.

Meanwhile, it is revealed that Locus and Felix have regrouped at the Jungle Temple, with the Great Key now fully functional for Felix. As Santa helps them prepare to activate the Purge, Felix asks him if they will be safe from the Purge’s effects. Santa, drearily, assures him that those residing inside the Temple of the Purge will be spared. While Felix exhibits joy of the news Locus expresses his concern about the safety of the space pirates guarding the communication temple. Felix tries to persuade Locus to forget about them but Locus insinuates his disagreement, saying that some of them are former partners. In response, Felix explains that their comrades’ trust in them does not allow them immunity and states that survival is a privilege that must be earned.

A space pirate then informs the two mercs that Control would like to speak to them about the loss of Armonia's artifacts. Felix, reluctantly, decides to deal with the Chairman himself and wonders if the latter would be interested in an alien A.I. After Felix leaves, Santa expresses his growing skepticism of him actually being a true warrior. Locus then asks Santa on what Felix saw after he passed through the gateway and what he is afraid of. Santa tells Locus that the answer is obvious, before disappearing to prepare for the Purge.

Back at Bravo, the Blood Gulch Crew finalize their counterattack plan. Knowing that Locus will be with Felix, Carolina and Wash agree to go on “defense” while the Reds and Blues go on “offense”. However, the Reds and Doc bring up the fact that they are not well armed and that the armies are still not working together, in which Kimball, who approaches the crew, suggests to talk to them. While concerned, the crew allow her to speak with the armies. Kimball quickly gets the attention of all the Fed and Rebel soldiers settled around Chorus and begins her speech.

She admits that she didn't believe the armies’ truce would last even if they managed to defeat Charon, as she still saw the Federal Army as the enemy. However, she justifies herself by explaining that when one spends every day fighting a war, one learns to demonize their opponent and begins seeing them as evil or sub-human. Kimball then admits that she was ultimately afraid to see the Federal Army for what thet truly were: their brothers and sisters. She adds that while they've all done horrible things to each other in the past, Doyle was able to overlook their quarrels and understood that their fight against Charon was a time for unity.

Kimball tells the armies that if they don't unite and fight as one they won't have a tomorrow and persuades the soldiers of Chorus to fight alongside her in order to defeat the Chairman and the Space Pirates once and for all. In response, all of the Feds and Rebels ecstatically cheer in unity. After the Blood Gulch Crew commend Kimball on her rousing speech, Kimball informs them that they still have something Charon doesn't.

The Reds and Blues then venture back to the Charon Excavation Site, where they are warmly welcomed by Santa. Tucker then approaches him and pulls out his sword, reactivating the Temple of Arms.

Open in at the end of the previous episode, with Carolina on the roof of the Pelican.

Epsilon: (voice only) Here we go!

Carolina forms a large bubble shield around the Pelican. Cut to black. Fade in to Epsilon-Theta's point of view, with Carolina looking down on him.

Epsilon-Theta: (voice only) Are we okay?

Fade out. Fade back in to Epsilon-Delta's point of view. Carolina, Tucker, and Sarge look down on him.

Fade out. Fade back in to Epsilon-Omega's point of view, with all the Reds and Blues looking down on him.

Epsilon-Omega: (voice only) Charon's going to regret that.

Fade out. Fade back in to Epsilon's point of view, who finally awakens to see the others surrounding him.

Epsilon: Ugh... North was a crazy son of a bitch.

Cut to Carolina walking outside with Epsilon. They are back at Crash Site Bravo. Feds and Rebels are seen with their heads down. Cut to Jensen, Palomo, Smith, Bitters and Matthews who are all have their heads down as well.

Carolina: There's more taking shelter inside the ship, but most of us are just scattered around the planet. I'm worried about Kimball. No matter what we say, the Feds seem to think she just let Doyle die. She's hardly said a word since we landed.

Wash appears behind them.

Washington: The mercenaries escaped. In a few hours this will all be over, one way or another.

Cut to the Jungle Temple. Felix is seen activating the sword.

Felix: (laughing) Oh, I will never get tired of that.

Locus: We lost too many people.

Felix: Fewer people, bigger cuts. Besides, we have all we need right here. (to someone else) Isn't that right?

Santa: If you now possess the key, then you have proven your worth.

Felix: That's what I like to hear. So, when we activate this Purge-

Santa: The Purge should only be activated as a last resort, if the inhabitants of the planet are not worthy.

Felix: Buddy, trust me, I've meet the guys, sooo not worthy. I just wanna double check and be sure that we won't be wiped along with them.

Santa: (sighs) Those residing within the temple will be spared.

Felix: Perfect! Now how exactly do we activate-

Locus: What about our remaining forces? They'll be killed guarding the communication temple.

Felix: Look, they were good men. ...Well, actually, they were disgusting, murdering bastards! But the point is what they don't know won't hurt 'em... until they're dead.

Locus: Some of them are former partners.

Felix: But orders are orders.

Felix: (sighs) Locus, when have we ever looked out for anyone other than ourselves?

Locus: They trust us.

Felix: And what, that gives them some sort of immunity? Survival isn't a right, it's a privilege. It's earned. That's the one thing we've always agreed on. If they deserve to live then they'd be strong enough to stop us and smart enough never to trust anyone. Hmm, we'll need to come up with something to tell Price on the Tartarus, you know, once it's done. Maybe the money will be enough.

Locus: I thought you were the people person.

Felix: (scowls) Man, you suck. Just ask this thing how to activate the temple, then let's go. (walks off then stops) You know, I wonder how much Hargrove would pay... for an alien A.I.? (leaves)

Santa: My creators believed the key and their gifts could only be wielded by a true warrior. I was skeptical of the first human... and then even more so of this one. I shall prepare all necessary data for the activation of the Purge.

Locus: You guard these relics. You spoke to me in the gateway. Created the things I saw.

Locus: Then can you tell me... what did Felix see? What is it he's afraid of?

Santa: ...Is it not so obvious? (disappears)

Santa disappears. Locus ponders. Cut back to Crash Site Bravo where the Blood Gulch Crew are seen formed in a huddle.

Epsilon: Alright, then we have a plan.

Tucker: You sure this'll work?

Epsilon: Felix will have to activate the purge personally, which means Locus will be with him.

Washington: And since they know our target's the comm temple, it's safe to assume that's where they'll send their men.

Carolina: Wash and I take defense, while the rest of you go on offense.

Epsilon: Just pretend it's a good ol' game of capture the flag.

Grif: You know we're terrible at capture the flag, right?

Simmons: So, assuming that this all plays out the way we hope it will, we still need to take over a heavily fortified alien tower. Anybody else seeing a problem here?

Sarge: We emptied the armory as best we could, but we ain't exactly armed to the teeth.

Kimball: (off screen) Then let me talk to them.

Kimball walks towards the group. Carolina and Epsilon look at each other, then back at Kimball.

Carolina: Are you sure that's a good idea?

Cut to the center of the canyon. Kimball walks onto a balcony and tries to get the attention of the Feds and Rebels below.

All the Feds and Rebels look at her. Cut to inside the shipwreck at Crash Site Bravo where a Rebel and a Fed listen to Kimball through a monitor.

Kimball: (over speaker) ...If I could have your attention, please.

A Rebel approaches the two soldiers.

Cut back to outside.

Fed: The fuck does she want?

Kimball: I know many of you probably don't care for what I have to say, but it's something that needs to be said.

Washington: (to Tucker) Think she can do this?

Kimball: (to Feds and Rebels) I never believed this truce would last.

The Feds and Rebels all reply in surprise.

Kimball: I thought that if we managed to survive Charon it would only be a matter of time before we were back at each other's throats. I believe this because in my eyes the Federal Army of Chorus was still the enemy.

Kimball: (over speaker) When you spend every day fighting a war, you learn to demonize your attackers.

Cut back to the Jungle Canyon.

Kimball: To you they're evil, they're sub-human. Because if they weren't, then what would that make you? ...What I'm trying to say... is I've been afraid to see you for what you really are. You're our brothers. Our sisters. And the things we've done to one another are unforgivable. But General Doyle was able to see past that. In the end, he understood that now isn't the time for pride or anger, now is the time for unity.

Cut to some Rebels and Feds listening to Kimball's speech at the New Republic headquarters.

Kimball: (over speaker) Every day I ask myself, "what do you fight for", and every day I answer, "for a better tomorrow".

Cut back to the Jungle Canyon

Kimball: Well, if we can't set aside our past and start trusting one another, there won't be a tomorrow. So please, fight with me. Fight to see Malcom Hargrove locked away for the rest of his life! Fight to wipe that stupid grin off of Felix's face! Fight because you deserve TO FUCKING WIN!!!

All the Feds and Rebels cheer and shoot their guns into the air.

Jensen: I've never been so excited!

Cut to the Reds and Blues.

Sarge: Not too shabby.

Washington: Still, it's not gonna be easy.

Kimball: No it isn't. But you're forgetting that we still have something that Charon doesn't.

Cut to the Charon Excavation Site.

Tucker walks up towards the far end of the temple then activates his sword, while the others watch. Santa appears before him.

Santa: I wondered when you would return.

Cut to the outside of the Temple of Arms as it starts to glow brightly, filling up the screen. 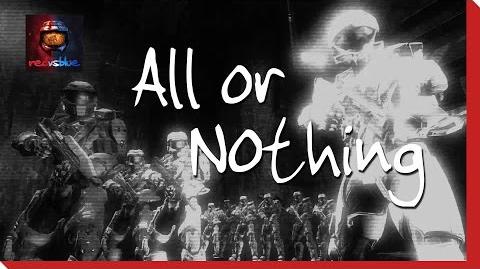 Retrieved from "https://rvb.fandom.com/wiki/All_or_Nothing?oldid=143343"
Community content is available under CC-BY-SA unless otherwise noted.