Aftermath, Before Biology is the fifteenth episode of the second season and the thirty-fourth episode of The Blood Gulch Chronicles.

Disoriented from the events of the previous episode, Doc discovers a hovercraft in a cave and consults with Vic, who proves to be unhelpful. Meanwhile, Tex has disappeared, and Grif awakes from surgery to find that Sarge has replaced most of his organs, which had been damaged in the accident with Sheila, with those left over from Simmons's cyborg operation.

Camera turns toward the sun, and then pans to the cave in which Doc is located. Vic of Blue Command talks in a static voice.

Vic: Hello, dude, come in. Doctor dude, are you there? Hello. Paging doctor dude to the radio, stat! I need twenty CCs of what the hell's going on there dude.

Doc walks out from behind a rock in the cave, groaning.

Vic: Hey, you tell me dude. One minute we’re talking about a hole in the wall, the next thing I know you turn into Grumps McGurt. Sounded like you needed a lozenge. Threatened to eat my children. Not very cool, dude.

Doc: Geez, did I really? I'm sorry, something went wrong with my radio, and I heard this weird beeping, honking-

Vic: Old Vic's been through the snip and stitch.

Vic: If you know what I mean.

Doc: I don't wanna hear about that.

Doc: Yeah alright, I, enough, I get you.

Vic: I mean a vasectomy, dude.

Vic: Rodger that. What did you find?

Vic: It's like a thing. Okay, dude. Thank you for the update. I'll be sure to alert the Chief of Staff...

Vic: Use your words, dude.

Doc: Look, I don't know. It looks like some kinda alien artifact. Do the aliens have like a home base or something here?

Vic: I don't know dude, why don't I just consult my Extra Terrestrial Travel Guide for ya. Oh look! Got a great series of alien bed and breakfasts there.

Doc: Never mind. I'll just figure it out myself.

Vic: Nothin’ about big purple things, though. Maybe it's some kind of alien vehicle.

Doc: Man, that guy is such a jerk. The next time he talks to me like that, I'm gonna tell him to go straight to H-E-Double Hockey Sticks. Oh, I really shouldn't talk like that, that's not very nice.

O'Malley/Doc: If I ever meet him, I'm taking his eyes as souvenirs.

Doc: Whoa, that was unlike me. I must be stressed out. Time for yoga!

Doc sits down, and the camera goes to Church and Tucker outside the blue base.

Tucker: I'm not gonna lie, it's not looking pretty. She may have twisted her differential, possibly some structural damage. Could be a disk.

Church: You have absolutely no idea what you're talking about, do you?

Tucker: No, no Tex. Is it unusual for her to disappear like that?

Church: When we were dating, she'd sneak off all the time. But it was usually to sleep with other guys, or to spend money that she'd taken out of my wallet. And since I don't have any money, and... well, no offense to you, Tucker, but...

Tucker: You're a dick.

The camera switches to show red base.It then fades to the inside of the base. Grif is moaning as if he had just woken up.

Sarge: Grif, don't try to move too much. You've been through quite the ordeal.

Donut: Hush now. Shhhh. Shhh. Shhh. Shh. It was really touch-and-go there for a while, good buddy. But I did it.

Donut: I pulled you through.

Grif: How long was I out?

Sarge: Don't you worry. Nurse Donut here stayed by your side the whole time, stroking your hand and keepin’ you company.

Grif: Note to self: Cut off left hand.

Sarge: Technically speaking, it's not really your left hand.

Sarge: I had to replace certain body parts that were severely damaged when the tank ran you over. And a few that atrophied from a lifetime diet of HooHoos and bacon flavored marshmallows.

Sarge: We'll, let's see. We had to start with the shoulder, then we moved on down to the flank...

Sarge: Made a left turn at the spare rib...

Donut: But we did find one of those pictures with the cow, and the dotted lines all over it

Sarge: Then up and over the porterhouse...

Donut: I think it did the trick.

Sarge: And of course the brisket...

Grif: Wait, where did you get the replacement parts?

Sarge: Why, from our other subject, of course.

The camera extends back to show Simmons.

Simmons: Yeah, I'm real happy about this myself, numbnuts.

Sarge: Yep, those too.

Grif: Did I get your lips?

Grif: ‘Cause maybe then I’ll finally figure out how to kiss Sarge’s ass.

Sarge: And the ass.

Grif: What the hell.

Grif: What didn’t I get?

Sarge: We pretty much replaced all the internal organs, and some of the more disgusting external ones. Except for Simmons’ spleen, which will be inflated and used for general recreation, and espirits de corps.

Sarge: Nonsense. Modern technology makes anything possible. It was as easy as shake n’ bake!

Donut: And I helped!

Sarge: Actually, Donut, I don't really know if snickering in the corner all night like a prepubescent monkey actually qualifies as help. But it sure was entertaining! 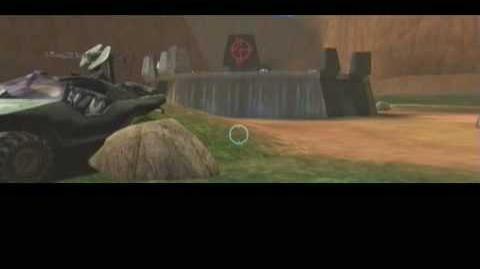 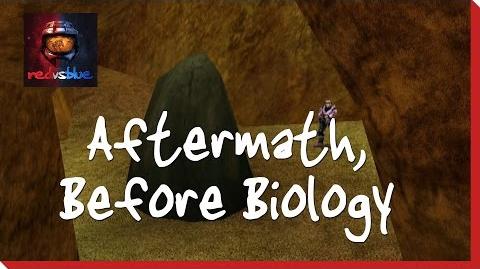 Aftermath, Before Biology - Episode 34 - Red vs. Blue Season 2
Remastered
Add a photo to this gallery
Retrieved from "https://rvb.fandom.com/wiki/Aftermath,_Before_Biology?oldid=135625"
Community content is available under CC-BY-SA unless otherwise noted.