After Church is the ninth episode of the series.

Grif and Simmons make it back to Red Base after the tank stops firing at them. Donut, with the Blue Team's flag close by, is clueless as to what has been happening and asked where their warthog was. Just then, their vehicle lands in-between them after an explosion from the tank causes it to flip-over on top of their base structure, prompting them to take cover.

Not too far away, the Rookie and Sheila continue to blast away at the warthog while Tucker watches them from the side. Tucker asks why he keeps shooting the jeep but is quickly told by the Rookie that if he were to unlock its target acquisition of the vehicle, he might kill someone else on his team, much like how he killed Church in the previous episode.

The Reds, in cover and under bombardment from the tank, suddenly receive a radio call from Sarge, who is returning to Blood Gulch from Command. Learning of the situation at hand, he flies in with air support, bombing Sheila (and subsequently the tank itself) out of action while the Rookie narrowly escapes his own death as he struggled to get out. The Rookie, referred to as Caboose for the first time by Tucker, expresses his despair over the loss of Sheila, in which Tucker initially thought was a real human woman.

Simmons and Grif run up the ramp onto the Red Base where Donut is waiting with the flag.

Simmons: Damn, man, we only ran like three hundred feet. You are really out of shape.

Simmons: General Patton here had a great strategy to leave it behind.

Grif: Hey, it would have worked if that tank hadn't shown up.

Donut: You lost the jeep? Oh man, Lopez is gonna be pissed. Where is it?

The Warthog suddenly flips up on the base from below by an explosion, landing between Donut and the other two. The camera cuts to a different angle to reveal Sheila in the background.

Grif: SON OF A BITCH!

Donut: Oh crap! (picks up the flag) What the hell is that thing?

Grif: (crouching next to the Warthog) That's the tank!

Grif: No, keep that away from me!

Cut to Caboose in Sheila with Tucker beside them. Sheila fires.

Tucker: Why do you keep firing at the jeep?

Caboose: Because it's locked on!

Caboose: Last time I unlocked it, I KILLED CHURCH!

Donut: I hate to be the one to point this out guys, but I think we're screwed.

Simmons: Yeah. I have to agree with the rookie on this one.

Sarge: Roger that, Private. I am currently in-bound to your position from Command.

Simmons: Sir, (Sheila fires in the background) this is Simmons.

Grif: Sarge, (Sheila fires in the background) WE. ARE GOING. TO DIE HERE!

Sarge: Well then hold tight, boys. I think I gotta solution to your little "tank" problem.

Pelican flies over Red Base. Cut back to Tucker.

Tucker: Hey, Caboose, (starts backing up) you might wanna get out of the tank. Like right now.

Caboose: I can't figure out how to get this thing open!

Tucker: Rookie, get out now!

Caboose: Okay, open the do—Okay, I, Sheila, will you please open the door?

Sheila: Driver canopy open. (Caboose gets out and runs away) Thank you for using the M808V Main Battle-

Shell hits Sheila and the explosion turns her upside down.

Tucker: Look at your tank though.

Cut to Caboose and Tucker.

Caboose: Sheila's the lady in the tank. She was my friend...

Tucker: Oh, dude! I knew you could pick up chicks in a tank! 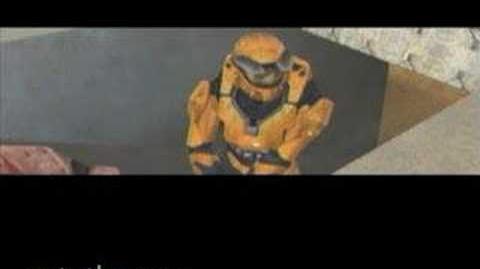 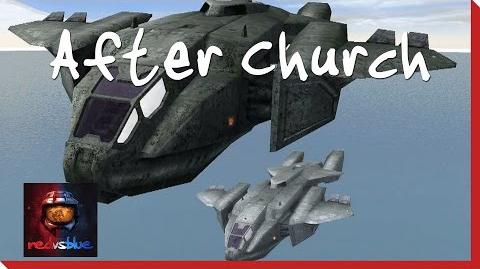