A Slightly Crueler Cruller is the sixteenth episode of The Blood Gulch Chronicles.

Sarge, followed by Lopez, joins them atop of Red Base. He also pokes fun at Donuts pink armor (addressing him as "madam" and other feminine titles), with Donut still insisting is light red. Sarge then asks Donut if he brought the "package". Donut says yes and hands Sarge a "speech unit" while explaining that it will work for Lopez, revealing "him" to be a robot. Sarge starts to install it into Lopez while joyfully saying to the Reds he'll finally have someone intelligent to talk to, besides from Simmons.

Sarge also tells them that he initially did not have a speech module for Lopez at the time he was building him. It is then known that Grif never knew of Lopez's robotic nature, but instead thought he was just a quiet person. Sarge and Simmons point out his arrogance, explaining the fact that Lopez slept while standing, as well as "drinking" motor oil, never gave hint to Grif that Lopez was in fact a robot. As Sarge finishes the installation of the speech unit, Simmons warns him about the possibility of the card being damaged by electrical output. Sarge mockingly rebukes his warning and slips in the card anyway. Just after doing so, an electrical discharge is seen coming from Lopez's body, startling Sarge.

At Blue Base, Caboose attempts to clean his armor free of its charred state while also commenting that it is hard to do so. Tucker agrees, saying it was easier when they only cleaned his armor. Caboose then annoyingly tells Tucker that he didn't do anything "helpful" during the rescue of Tex. Tucker responds by making fun of him and his seemingly incessant team-killing. Caboose then tells him to not make him mad.

Back at Red Base, Donut tries to recollect the prior events before he sustained his injuries back when Red Team was attacked by Tex. He starts by remembering he had some kind of "spider" stuck to his head, and that he exploded. Donut also remembers that Simmons had fainted because of it, but Simmons denies it once more. Sarge finally completes the installation of Lopez's speech unit and tells him to activate it. Lopez acknowledges and speaks. Much to the dismay of Red Team however, Lopez only responds in Spanish, albeit in a monotone voice, due to Sarges negligence in handling the speech card beforehand. However, Sarge blames this accident on Donut, saying that he picked up the wrong model. As Sarge tries to have Lopez speak in English, Grif points out that it is no use. Sarge then asks Lopez, who can supposedly understand English, but not speak it, if he would like to shoot Grif out of annoyance. Lopez complies, but Grif tells him not to.

Donut stands on top of Red Base in pink armor.

Donut: Dude, this is sweet! Command was so happy that I got the Blue flag, they gave me my own color armor!

Grif and Simmons look at each other.

Simmons: Um, about your armor...

Donut: What about it?

Grif: It's pink. Your armor is frickin' pink!

Donut: Pink? My armor's not pink!

Donut: You guys are color-blind. Why would they give me pink armor?

Grif: (laughs a little more) It's a little funny.

Grif: Guess what? They already have a color for lightish red. You know what it's called? Pink.

Donut: I hate you guys.

Sarge: (running up the ramp with Lopez in tow) Well hello, dirtbags. ...and a fine hello to you, madam.

Sarge: Don't get your panties in a wad there, Barbie. Do you have a package for me?

Donut: (holding up a mechanical unit) They said this speech unit should work with Lopez.

Donut: (handing the unit over to Sarge) Here you go.

Sarge: Affirmative. Command was fresh out of speech modules when I started building Lopez, but once I get this baby installed, I'll finally have someone intelligent to talk to. ...No offense, Simmons.

Simmons: Oh, don't worry, I know who you meant, sir.

Grif: Wait a second.. Lopez is a robot?

Simmons: Of course he is. You didn't notice that he never talks?

Grif: I just thought he was a really quiet guy.

Sarge: And the fact that he sleeps standing up and drinks motor oil didn't get your attention?

Grif: Well I-I did think the motor oil thing was a bit odd... Uh, I just thought he was trying to impress me.

Simmons: Hey, sir. You really should ground yourself before handling that card.

Simmons: Because static could damage the card.

Sarge: Come on. That's an urban legend they use to sell those stupid bracelets. (Grif and Simmons look at each other) And I suppose Pop Rocks and soda's gonna make my stomach blow up! (he inserts the card and there's a visible electric discharge which makes him jump back) YOW!

Donut: It's not pink, it's lightish red!

Cut to Caboose and Tucker outside the Blue Base. Tucker's armor is clean, but Caboose's is still black.

Caboose: (panting) Ah, man, uh, you know, this stuff does not come off easy?

Tucker: Yeah, this was a lot easier when we were cleaning just my armor.

Caboose: Yeah, I know that, that's I think because you know, uh, YOU DIDN'T DO ANYTHING.

Tucker: I'm sorry, what? It's kind of hard to hear you over the sound of your constant team-killing.

Donut: So, what happened to me anyway? I recall something about a spider on my head?

Grif: Right. That was a grenade.

Donut: And the last thing I remember.. is a loud bang.. and then Simmons fainting...

Simmons: I did not faint.

Donut: (over the last five numbers) Am I the only one not understanding any of this?

Lopez: Me llamo López. [My name is Lopez]

Grif: Lopez, he just said Lopez! I understood that. I can speak Spanish!

Simmons: Huh, I think you shorted out his speech unit with that static, sir.

Donut: Seriously, dude. For the last time: Not pink.

Sarge: Lopez. I order you to speak a language we understand.

Grif: Why are you talking so slow? He understands us just fine. Maybe you should try listening slower.

(Grif and Simmons Says This in the Earlier Version)

Grif: Then why do they put it on stop signs? 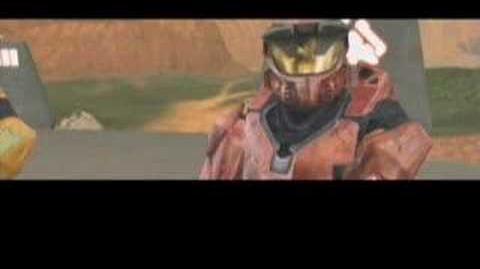 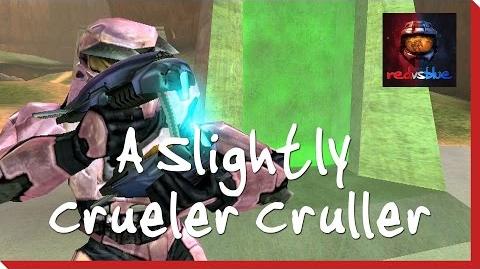 A Slightly Crueler Cruller - Episode 16 - Red vs. Blue Season 1
Remastered
Add a photo to this gallery
Retrieved from "https://rvb.fandom.com/wiki/A_Slightly_Crueler_Cruller?oldid=146143"
Community content is available under CC-BY-SA unless otherwise noted.