A Shadow of His Former Self

A Shadow of His Former Self is the tenth episode of the series.

While Caboose cleans the "black stuff" off of Tucker's armor (in which he received after he went through the teleporter in The Package is in the Open), Tucker calls Blue Command for immediate reinforcements. Vic, their contact at Command, tells them that they have two options -either wait 16 days for the nearest Blue forces to arrive, or hire a mercenary, known as a "Freelancer" or gun-for-hire (as explained by Tucker), in under an hour. Both the Blues pick the quicker option and are told by Vic that the Freelancer designated as "Tex" will arrive shortly.

After the call, Church's supposed "ghost" appears in order to warn the Blue Team about Tex, who once slaughtered his entire squad at his previous posting at Sidewinder. As he disappears, he warns his teammates to prevent Tex from becoming even remotely involved with their events, vaguely stating that he was the reason why Church never got to marry his girlfriend back home. As Caboose and Tucker discuss the correlation between Church's girlfriend and Tex, Tex soon arrives unbeknownst to the two, wearing black "Special Forces" armor.

Radio noise is heard as the camera fades from black. Caboose is standing behind Tucker.

Tucker: Come in, Blue Command. This is Blood Gulch Outpost Alpha. Do you read me?

Caboose: Okay, that is the last of it. Your armor is clean now!

Tucker: Did you get all the black stuff off?

More radio noise is heard. Cut to Vic sitting at his control panel.

Vic: Roger that, Blood Gulch. What is your request?

Tucker: I don't know what the technical military term is for it, but, uh, we're pretty fucked up down here. We need men!

Vic: (pauses) Dude, how long have you guys been down there?

Vic: Roger that. Did you get the tank we sent?

Tucker: Yeah, that got blown up too.

Vic: Okay, here's what I can do. The nearest Blue forces can be there in 16 days, or I-

Vic: OR I can hire a nearby Freelancer and get him there within a few hours.

Tucker: Yeah, me too. Roger that, Command. We prefer the quicker solution.

Vic: 10-4, Blood Gulch. We'll contact Freelancer Tex and have them there post-haste. Command out.

Tucker: Whoever he is, make sure he can fix a tank.

Tucker: Freelancers are independent. They're not Red or Blue. They're just guns for hire who'll fight for whoever has the most money.

Tucker: Right. Or like your mom when the rent's due.

Tucker: Yeah? You didn't think that was too obvious?

A semi-transparent Church fades into view between Tucker and Caboose.

Tucker: Who the hell are you!?

Church: I am the ghost of Church, and I've come back with a warning!

Caboose: You're not Church! Church is blue. You're white!

Church: (normal voice) Rookie, shut up, man! I'm a freakin' ghost! Have you ever seen a blue ghost before?

Tucker: Is it really necessary to do the voice?

Church: (normal voice) Fine. Okay, here's the deal: I've come back from the dead to give you a warning about Tex. Don't let-

Church: Shut up for one second and I'll tell you!

Church: Seriously, man. I mean, I'm coming back from the great beyond here. Do you think this is easy? It's not. It's not like, just, you know, pop in and out whenever I feel like it, it takes a lot of concentration.

Church: I mean, it's bad enough that you killed me to begin with but now I come back and I can't get a word in edgewise, man. (takes a deep breath) Okay, here's the deal-

Caboose: (interrupting) Is this the warning?

Church: Alright, that's it. I swear to god, Caboose, your ass is haunted. When we're done here, I'm gonna haunt you.

Tucker: Yeah, you're even starting to bug me.

Church: Okay, Tucker. You remember that I told you that I was stationed on Sidewinder before they transferred me here to Blood Gulch, right?

Church: What do you want from me? A poem? It's a planet made entirely out of ice. It's really.. fuckin'.. cold.

Tucker: Will you just let him talk?

Church: One day, when I was there, everything was just like normal. I remember.. I was out on patrol with my partner, Jimmy. That Jimmy was a real good kid. Everybody liked him.

Tucker: D'ya think I was a good kid, Church?

Church: Tucker, don't get jealous, man. Just listen to the story, okay? Like I said, the guys were hanging around, waiting for some action, bitching about the cold...

Sidewinder Blue #2: I hope we get some action.

Church: Anyway, Jimmy was in the middle of telling me all about this girlfriend he had back home.

Jimmy: (in a highland southern accent) Yep, as soon as I get back, I'm gonna get down on one knee and ask her to marry me.

Church: And that's when Tex showed up.

A soldier in active camouflage [invisibility] moves in front of Jimmy and Church.

Church: Private Mickey was the first to go. He was halfway across the base when all of sudden he started screaming bloody murder...

A Blue firing an Assault Rifle is hit from behind by a camouflaged Tex.

Church: The whole thing was over before it even started.

Tex kills another Blue. Switch to Jimmy and Church firing their guns.

Church: Poor Jimmy was the last one to go. Tex walked up to him, pulled Jimmy's skull right out of his head, and beat him to death with it.

Cut to Tucker at Blood Gulch.

Tucker: Wait a second.. how do you beat someone to death with their own skull? That doesn't seem physically possible.

Cut to Tex hitting Jimmy with his skull.

Church: Bottom line is, these Freelancers, they're bad news, and Tex is one of the worst.

Caboose: If he's such a bad-ass, why didn't he kill you?

Cut to Church standing alone in Sidewinder with blood all over the ground. The camera zooms out, revealing all the Sidewinder Blues are dead.

Church: To tell ya, I don't know why I'm not dead. Coulda killed me at any point. ...But maybe it's because Tex and I have run into each other once before.

Church: You, uh.. you remember that girl I told you about, back home? Well, let's just say that Tex is the real reason why we never got married. Guys, I'm fading fast, and I don't know when I'll be back. Just listen to my warning. Don't let Tex get involved here.

Church: I mean it, Tucker. No fighting, no scouting, nothing. You'll regret it...

Tucker: So..! Tex and Church were after the same girl.

Caboose: I told you his girlfriend was a slut.

The camera pans, revealing Tex standing behind Tucker and Caboose. 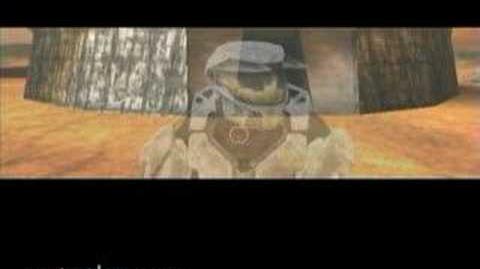 A Shadow of His Former Self
Original 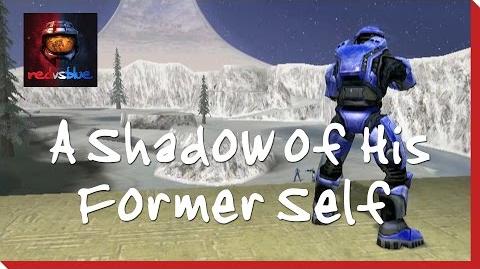 A Shadow of His Former Self - Episode 10 - Red vs. Blue Season 1
Remastered
Community content is available under CC-BY-SA unless otherwise noted.
Advertisement